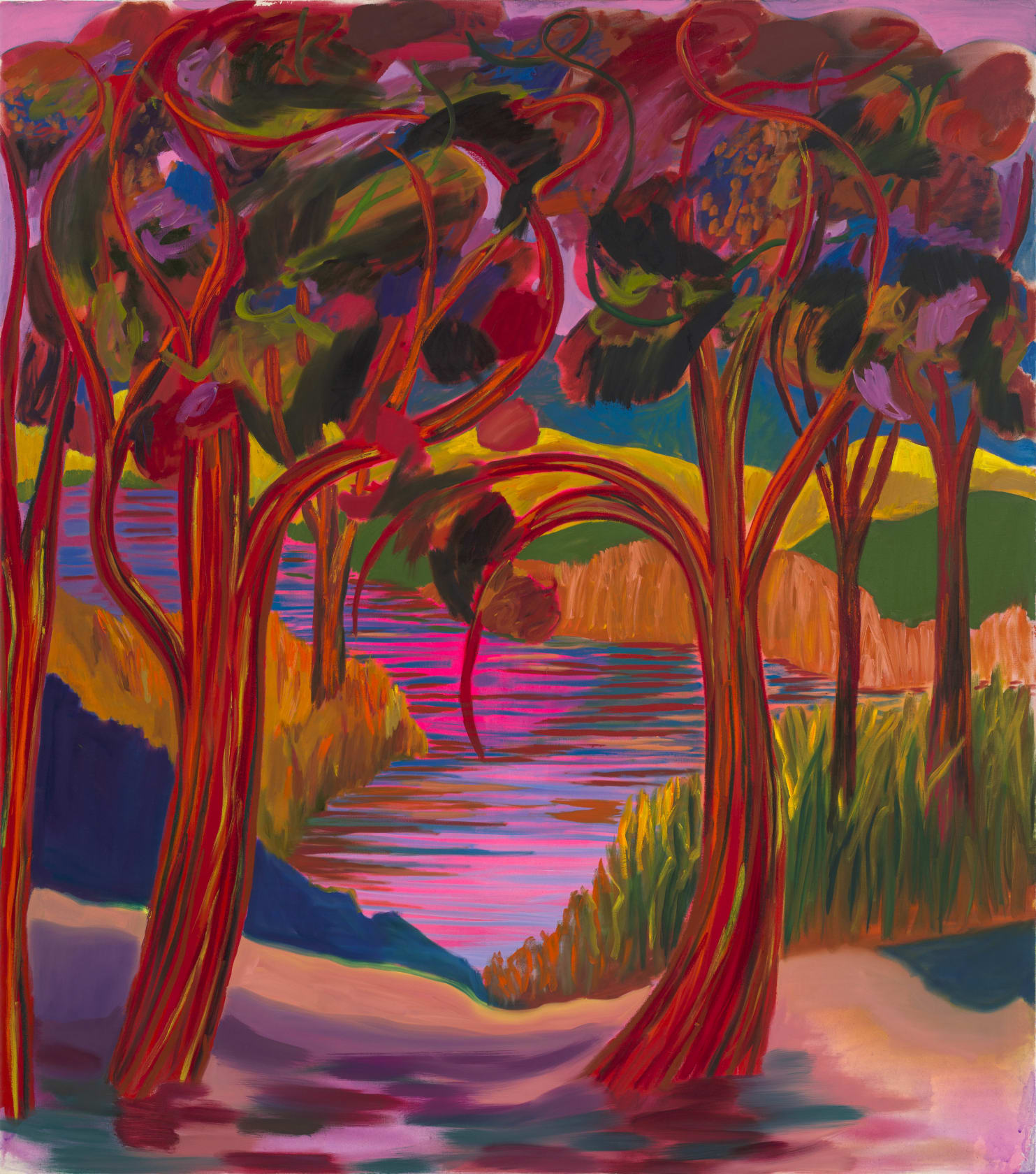 At Marfa Ballroom, Texas, US

Donna Huanca will present a series of new work commissioned by Ballroom Marfa in her exhibition ESPEJO QUEMADA. Huanca creates experiential installations that incorporate paintings, sculptures, video, scent and sound. The profound experiences and memories of Huanca’s first visit to Marfa in 2005 inspired the work in the exhibition. The artworks draw on visual, cultural, and mythological cues informed by feminism, decolonialism and the artist’s personal and familial histories, while simultaneously engaging with the biodiversity, geology, and dark skies of Far West Texas. The sky was particularly striking for Huanca–animated with cosmic and extraterrestrial forces while also revealing the natural rhythms of the sun and moon.

ESPEJO QUEMADA, Huanca’s first exhibition since the pandemic, also uses mirrors as formal and metaphorical devices to respond to changing conditions. The title, which translates to “burnt mirror,” alludes to reflections of the current moment; portals to the past and future; and ignitions of combustion and change. Time, touch and embodied experiences are all reconsidered today, especially when viewing artworks, which are now mostly encountered digitally. Huanca further pushes the phenomenological effects in her installations. She works with an amalgam of color, texture, sound, and scent to enliven the senses and create alternative and elongated temporal spaces for contemplation. Shifts in perception are also experienced in Ballroom’s courtyard. The artist displays her first series of outdoor sculptures that use light and temperature sensitive pigment that respond to the climate in Marfa, changing over the course of the exhibition.

Born 1978. Lives and works between Paris and Frankfurt.

Palais de Tokyo invited Anne Imhof to realise an exhibition occupying all its spaces in the autumn of 2020, but due to COVID-19 restrictions, the exhibition is finally scheduled to open in April 2021. This project continues a series of Cartes Blanches, beginning with Philippe Parreno in 2013 and followed by Tino Sehgal (2016), Camille Henrot (2017) and Tomàs Saraceno (2018) thereafter. Anne Imhof, whose international recognition includes the Golden Lion at the Venice Biennale in 2017, has exhibited at Palais de Tokyo as early as 2015 with DEAL, presented as part of the festival Do Disturb.

With this Carte Blanche, Palais de Tokyo wishes to highlight the amplour and protean character of her practice. For this first large-scale exhibition in France, she will combine performance, painting, music and installation works. This Spring, she will be stripping bare the spaces of Palais de Tokyo while inviting the public to a topographical experience, a spiral descent into the building’s entrails. Anne Imhof will thus open up new perspectives onto the spaces, but also onto her practice, placing it in a broader aesthetic and conceptual tradition, which connects it to other historical and contemporary artists. Her own works will be put into dialogue with pieces by guest artists which will punctuate the show.

For her Carte blanche, Anne Imhof will create effects of resonance and duplication amid an open architectural space, transformed into a vast sonic body and an inhabited labyrinth. She deconstructs the hierarchical systems it embodies so as to generate new images in which the live, visual arts, music and architecture merge.

Born 1981 in Atlanta, Georgia. The New York based artist Shara Hughes describes her lush, vibrantly chromatic images of hills, rivers, trees and shorelines, often framed by abstract patterning, as "invented landscapes." Full of gestural effect, surface tactility and possessing a fairytale mood of reverie, these paintings, as the New Yorker described them, "use every trick in the book to seduce, but still manage to come off as guileless visions of not-so-far-away worlds." Bold, clashing colours and shifting perspectives manifest into dream-like landscapes that push and pull the eye across the canvas, challenging conventions of space. Rather than depicting true to life landscapes, Hughes invites us into a fantastical world offered as a portal for psychological discovery and reflection.

Located along the West Bund in Xuhui District, Yuz Museum, Shanghai is a non-profit organisation under the umbrella of the Yuz Foundation. The museum strives to promote the exhibition and development of contemporary art and to enhance the public’s understanding and appreciation of contemporary art. The space of Shanghai Yuz Museum was once the hangar of Longhua Airport.

Born 1983. Lives and works in Switzerland and Berlin.

The Swiss contemporary artist Claudia Comte is known for her interest in ecological conservation. Her works explore the lifecycle of natural materials, juxtaposing wooden sculptures against graphic wall paintings. This exhibition will bring together a series of sculptures carved with a chainsaw that have been specially commissioned for this event. The artist found the wood from endemic species during her residency at the interdisciplinary and collaborative programme offered by TBA21-Academy and Alligator Head Foundation at their space in Port Antonio (Jamaica).

The works are divided into two groups, the first inspired by coral formations and the second by abstract forms. The first group takes its starting point from the damage being inflicted on coral reefs and aims to express the artist’s concern for the preservation of the oceans. The second group is a continuation of Sculpture Objects, a larger and significant project that Comte began in 2012. It comprises vaguely recognisable figures that refer to works from the modern tradition in a random, humorous way. The installation is completed with mural paintings and a selection of sounds compiled by the musician Egon Elliut and the artist in the waters and forests of Jamaica.

Marking the artist's first solo exhibition at a major museum in Asia, ‘Christina Quarles: Dance by tha Light of tha Moon’ focuses upon the artist’s long-term exploration of the body. Through a number of paintings created since 2015, it unfolds an artistic narrative on gender, race and queerness. The exhibition is to be echoed with two major solo exhibitions at the Museum of Contemporary Art Chicago in the US and the South London Gallery in the UK.

Quarles’s paintings depict the universal experiences of residing in the human body through highly abstracted brushworks: her distorted, fluid portraits reveal the unsettling perception of self and social belonging, in the context of multiple identities and roles. Identifying as a multi-racial queer woman, Quarles draws inspiration from her personal experiences, translating the ambiguity of gender and racial identity into vibrant acrylic works with her highly personal approach to painting.

To inaugurate the permanent, site-specific sculpture Fallen Sky by artist Sarah Sze (b. 1969, Boston, US), Storm King will present a new exhibition of the same name. The exhibition will flow from two indoor gallery spaces in Storm King’s 1935 Normandy-style Museum Building out into the landscape beyond, leading the visitor from the exhibition towards an overlook to Storm King’s breathtaking south expanse, and to the site of the 36-foot-round Fallen Sky, framed by the mountains beyond. The exhibition will take landscape as its subject—not a depiction of landscape, but rather a consideration of landscape in varying states—from growth to entropy. In the interior exhibition gallery, Sze will consider landscapes' ability to extend indoor space into the outdoors. In an exploration of painting's ability to create and expand walls into portals, Sze will install a large-scale series of wall panels that have been painted, printed, and collaged to create a feeling of recession into deep space. Playing with the physical interpretation of landscape itself, the artist will incorporate the plants used in the landscaping of Fallen Sky, as well as materials and debris from making the permanent work, showing the creative process itself as a system of development and demise. To experience this exhibition is to enter another world.

The sculpture Fallen Sky will consist of a delicate and entropic 36-foot-diameter spherical cavity pressed into the earth and sheathed in mirrored stainless steel. The large scale and shimmering surface of the sculpture will allow it to be seen both up close and from far away across Storm King’s rolling fields. Fallen Sky is Storm King’s first permanent commission in more than a decade, since Maya Lin’s Storm King Wavefield was completed in 2008. Fallen Sky joins a historic series of site-specific commissions for Storm King’s permanent collection, which also includes works by Andy Goldsworthy, Isamu Noguchi, and Richard Serra, among others.

At Institute of Contemporary Art, Miami

This exhibition will mark Fadojutimi’s first solo U.S. museum project. Exploring a complex emotional landscape, Jadé Fadojutimi's paintings offer an insight into the artist's quest for identity and self-knowledge. For Fadojutimi, painting is like looking into a windowpane and seeing the reflection of her self, the context in which she lives, and the distorted fusion of these two. Using the canvas as a sounding board, she grapples with memories of everyday experiences, both good and bad. Through this process Fadojutimi examines how her sense of self is constructed so that her paintings communicate forms of emotion which are impossible to convey through language.

In her interrogation of identity, and how it informs and is informed by one's surroundings, Fadojutimi is fascinated by the ways in which we adorn ourselves with clothes and accessories in order to construct a sense of self. The shapes of patterned stockings and bows, as well as eclectic swatches of fabric, recur in many of her paintings. Outlines of objects that resonate with the artist but often elude the viewer also feature surreptitiously. The artist also reflects on the trauma of feeling displaced or alienated from one's surroundings. Many of her works depict mysterious landscapes which toe the line between figuration and abstraction, an attempt to create a form of reality which is parallel to but separate from the real world.