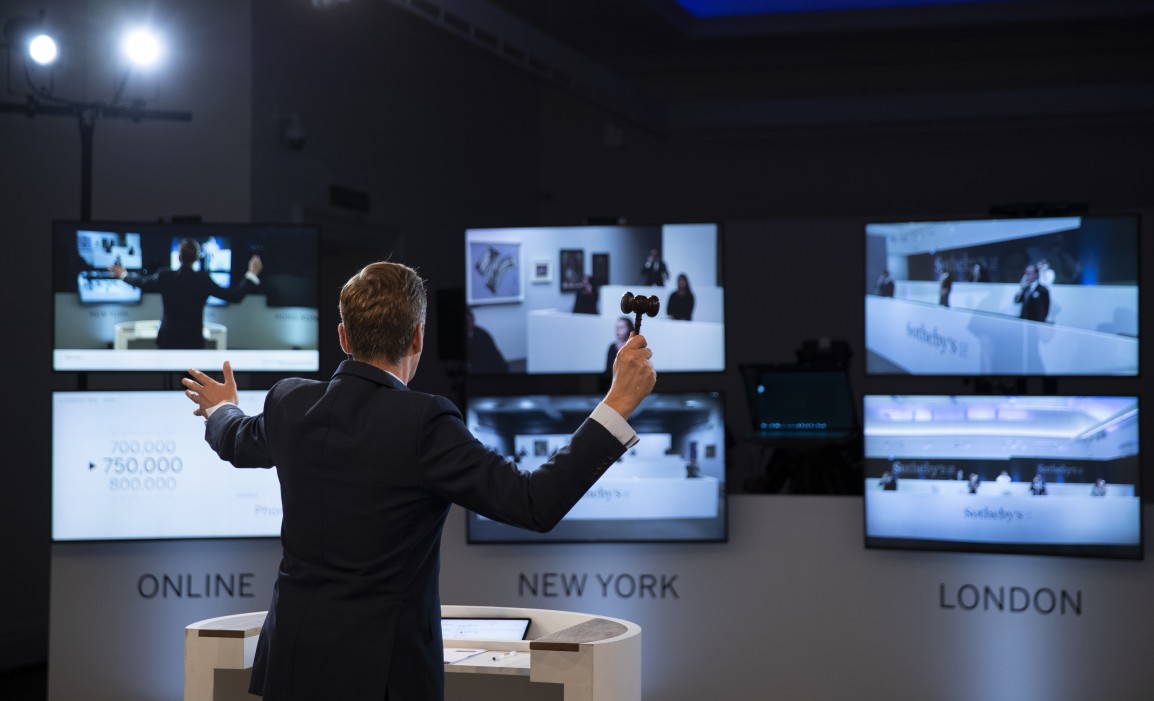 The pandemic has pushed auction houses to reinvent themselves in a matter of weeks, forcing them to reimagine the dynamics of the art market in a new paradigm. The growing fear that the health crisis could kill off the market for the spring sales steered Sotheby’s, Christie’s, and Phillips to step up their game, thus upgrading their online sales strategy. This approach resulted in the first-ever hybrid online in-person live-streamed auctions, held in late June and July. Despite revenues suffered nearly a 50% decrease from 2019 spring sales, there were some unforeseen positive results on two segments: the high-end paintings and the younger artists. For instance, Nicolas Party’s Still Life was acquired for $1.02 million at the Christie’s Hong Kong section, above its $541,820 pre-sale high estimate. In this spirit, artists like Lucas Arruda and Amoako Boafo dominated the evening sale at Phillips, bringing in good results confirming the steady rise of this new generation of artists. At the top end of the market, the performance of works by Jean Michel Basquiat, George Condo, and Lee Krasner, among others, confirmed buyers are no longer skeptical of bidding online.

Let’s take a closer look on how the three main auction houses pivoted to online to handle this crisis:

Everything was perfectly orchestrated for the Sotheby’s live-streamed marquee auctions. Masterminded by cinematographer Joel Mishcon, and elegantly lead by auctioneer Oliver Barker, from a purpose-built studio with eight screens in the Sotheby’s Mayfair headquarters, the marathon sale left no room for technological mishaps. Buyers could bid by phone or online, and Barker took bids from Sotheby’s colleagues on the phone banks in New York, London, and Hong Kong. The high point of the evening sale was Francis Bacon’s Triptych Inspired by the Oresteia of Aeschylus which was bought by a telephone buyer in New York for $84.6 million, marking the artist’s third-highest price ever at auction. Another highlight of the evening was late artist Matthew Wong’s painting The Realm of Appearances, acquired for $1.82 million, exceeding the $80,000 high estimate, thus making his best performance of the season.

Christie’s live-stream ONE auction brought in $421million, setting seven artists’ records led by $46.24 million Roy Lichtenstein’s Nude with Joyous Painting. George Condo’s $6.85 million Force Fields and $ 4.6 million Baselitz’s Bent Drinker reflect how the masterworks in the high-end painting segment were the ones to catch the bidders’ attention for the most of the marquee auction. Carried away by ambition, Christie’s went for an experimental format: four auctioneers in London, Paris, Hong Kong, and New York who took turns to handle a section of the sale. As explained by Art Newspaper editor Anna Brady, ONE aimed ‘to illustrate the global and democratic nature of Christie’s operation.’ Despite their positive results and the innovative nature of the event, it turned out to be quite an exhausting evening, with several challenges encountered, such as having portions of the sale held in different currencies. ﻿‍

In this new landscape, Phillips managed to perform a White-Glove Contemporary Evening Sale reaching $34.7 million at the hammer. Despite Phillip's results didn't come close to Sotheby’s and Christie’s figures, auctioneer Henry Highley, running the sale from London, managed to score some interesting results such as Claire Tabouret’s record breaking piece Les Déguisements acquired for $ 451, 000; Wong’s painting which was bought for $848, 000 by a phone bidder, and Amoako Boafo’s Joy in Purple sold for $668, 000, more than nine times its high estimate.

Overall, Sotheby’s, Christie’s and Phillips managed to roll out liable platforms to keep their businesses afloat. The digitalization of the auction arena has enabled auction houses to reduce costs and increase viewers, as Sotheby’s reported that the viewing audience for the digital auction was ‘five times the average for major evening sales.’ What used to be a live theatre, has now become a ‘streaming business’ assured Oliver Barker to Thomas Barrie. However, it is too soon to see if all the much-needed drama of the auction room that encourages bidding will survive the new four-hour, live-streamed, cybernetic sales.