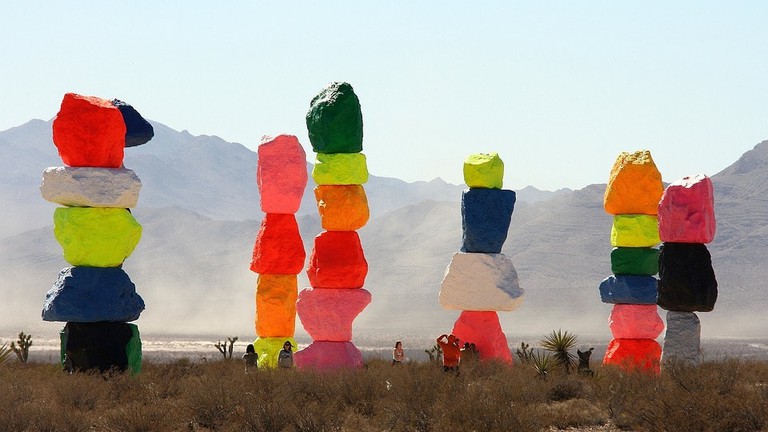 Swiss-born and New York-based artist, Ugo Rondinone emerged in the 1990s becoming one of the leading contemporary artists of our times. Famous for his permanent installation in Nevada, Seven Magic Mountains, Rondinone refuses to settle on a single medium, often recurring to painting, sculpture, photography, sound and video.

The target paintings, considered his most iconic body of work, appeared in 1991 in Rondinone’s oeuvre. The works are titled with their execution date in German, drawing the attention to the conception of time and duration, which is at the core of Rondinone’s existentialist analysis.

The works are spray-painted with blurry rings of colour that, despite their apparent simplicity, pulsate, creating an illusion of depth. The illusory visual energy generates a psychedelic effect that destabilises the viewer’s eye.

In his art Rondinone often uses patterns which derive from art history. He says:

“If you do art today with relevance, then [artistic] movements … are naturally part of the information in this new work. Every artwork has its history and carries the whole information of art history.” -U.R

In Target Paintings, there is a clear recall to the work of Kenneth Noland whose target paintings were realised in the 1950s. Noland evolved his most remembered sequence of work in the late 1950s, at the outset of Post-painterly abstraction and the close of the modern period. He worked them by hand and stained the color into the canvas. Ugo Rondinone, by contrast, birthed his pictures in 1991.

Of course, comparing artists that are decades apart is generally just as wrongheaded as comparing images that are superficially similar: context is all. But before we place Ugo Rondinone more precisely in his own time, it is important to recognize that artists of his generation—and particularly those working in paint—have had a peculiarly strong relationship to modernism, its themes and concerns forming a pole against which they react and navigate. That makes the comparison of Kenneth Noland and Ugo Rondinone instructive.

Although Rondinone and Noland’s target paintings are aesthetically similar, their execution and conceptions are extremely different. As Noland was primarily concerned with form, it was important to erase any trace of the artist by employing rollers, sponges and brushes; in addition, the usage of geometric forms crated a space where the viewer’s eye could primarily focus on the presentation of color.

For his paintings, Rondinone also takes inspiration from Op Art’s psychedelic patterns and extends Noland’s precepts of repetition and random permutation of colour and line. Contrarily to Noland, Rondinone’s circles are perfectly symmetric, contributing to create a stronger optical illusion.

The Target Paintings generate a powerful visual involvement so that its viewers are engaged through the experience rather than its conceptual understanding. This is Rondinone’s unique and special way to create a dialogue between audience and artwork and a moment to reflect on this complicated relationship.