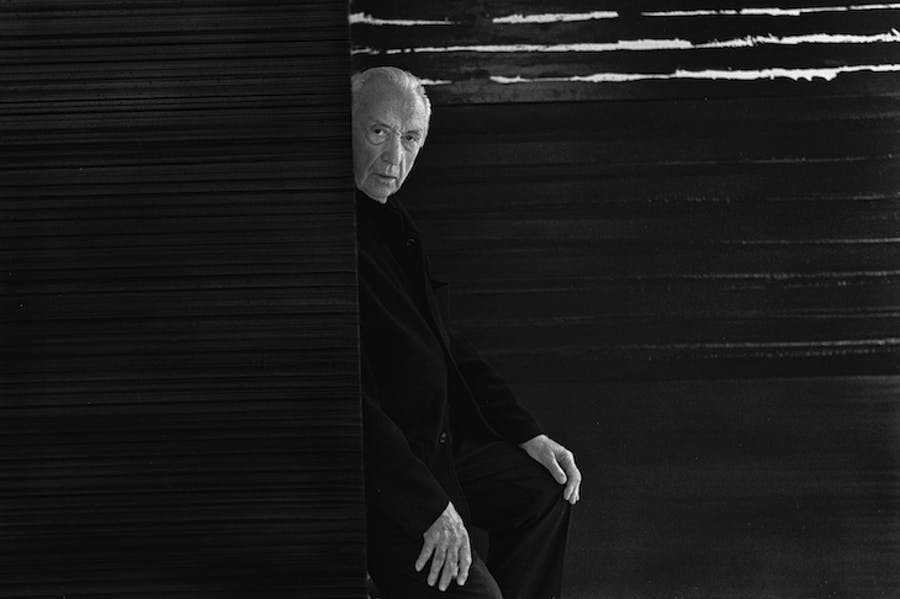 Soulages is not only the most famous living French painter, he is a giant of painting. Today his work is shown in 110 museums around the world and has been exhibited on every continent. Soulages once said that he was truly born from painting.

In 2019, on the occasion of the artist’s 100th birthday the Musée du Louvre in Paris dedicated a solo exhibition to the artist in the prestigious Salon Carré, the greatest tribute an artist can receive. In November 2018, his painting “Peinture 186 x 143 cm, 23 Décembre 1959” fetched an auction record at $10.6million. Since 2017, the demand for his paintings has skyrocketed. These figures come at no surprise, as it is not unusual to see that by the time celebrated artists reach the age of 99, they often enjoy considerable prestige and celebrity, generating an aura on which museums, galleries and auction houses, have learnt how to capitalize.

In a career spanning decades, Soulages' radically original and forcefully disruptive body of work has made no reference neither to images nor to language, and yet it is not pure formalism: it accepts that the viewer interprets it freely for himself, as opposed to many of the informal or non-figurative abstract works of the period. In 1948, Soulages wrote this striking formula:

"Painting is an organization, a collection of relationships between forms (lines, colored surfaces) on which the meanings we attribute to it come together and break apart." -P.S.

From the 1940s to the 1970s, black progressively conquered the surface of his calligraphic-like abstract paintings, which also incorporated subtle hints of colors (mainly ocher and blue). His aesthetics radically shifted towards monochrome in 1979, when he initiated his lifelong series Outrenoir. He has been known as “the painter of black and light” ever since. Literally translating as “beyond black,” Outrenoir opens onto a new realm that transcends purely gestural and monochromatic abstraction. Systematically applied in thick layers on canvas, black paint is meticulously scraped, striated and overall sculpted to create smooth or rough areas reflecting light in various ways. By masterfully turning black into a luminous color, Pierre Soulages powerfully evokes the Genesis of the world, which came out of darkness, addressing the question of meaning.

Emerging at the beginning of the 1970s, after 33 years of painting, or right in the middle of Soulages’ activity between 1946 to today, Outrenoir was a profound disruption that inaugurated a new kid of painting, without interrupting the overall coherency of his oeuvre. As always, since his first works in 1946, and even since his childhood, Soulages interrogated the relationship between light and dark, but from this point on he used the light outside of the canvas, which he considered his own veritable instrument.

“Outrenoir refers to a reflected light that is beyond black, transformed by black. Outrenoir is a black that ceases to be black, instead emitting light, a secret light. Outrenoir is a mental space that is beyond mere black. I attempted to analyze the poetry inherent in my own practice as I created these works and explored their relationship to space and time. The light emitted by the canvas projects a certain aura around the painting, and the viewer becomes part of that space. There is an instantaneity of vision, regardless of the point of view from which you approach the painting; as you move around it, that first vision dissolves, disappears, and is then replaced by another. The canvas is present at the moment you see it.”

Since 2004, Soulages no longer works with oils, but with resins that provide him thicknesses of paint that he had never before attained. A new kind of work with light, via reflection, appeared: on the peaceful clarity of a vast surface of solid black, he engraves one or two very deep scarifications, sensual wide gashes, in which a vivid light settles to further accentuate the mystery. Most recently, Soulages has used the contrast between glossy or semi - glossy black and matte black, offering never before seen views of pictorial light.

“With ‘outrenoir’, the viewer is much more implicated, much more alone. I think that I make paintings so that anyone who looks at them, whether it’s me or anyone else, can find himself in front of a painting, alone with himself. Soulages’ painting, whether on canvas, on paper or expressed in stained glass, in representing nothing, and reflecting nothing, reflects myself back to me. Because it calls for no decoding, no imposition of meaning, it invites me to constitute meaning in myself.”

“The radical originality of Soulages’ outrenoir consists in creating works that are entirely painted with black pigment, yet do not appear monochromatic to the viewer. I’ve called them ‘mono-pigmentary paintings with a chromatic versatility’: in these works, black is no longer a color but rather appears as the source of the light that strikes it, adopting the colors that its environment gives it.”

—— Pierre Encrevé, extract from "Alight in our darkness", published in Soulages in Japan, Perrotin publishing, 2017

The information included in this Journal Post with regards to the Outrenoir paintings has been gathered from Galerie Perrontin's website.