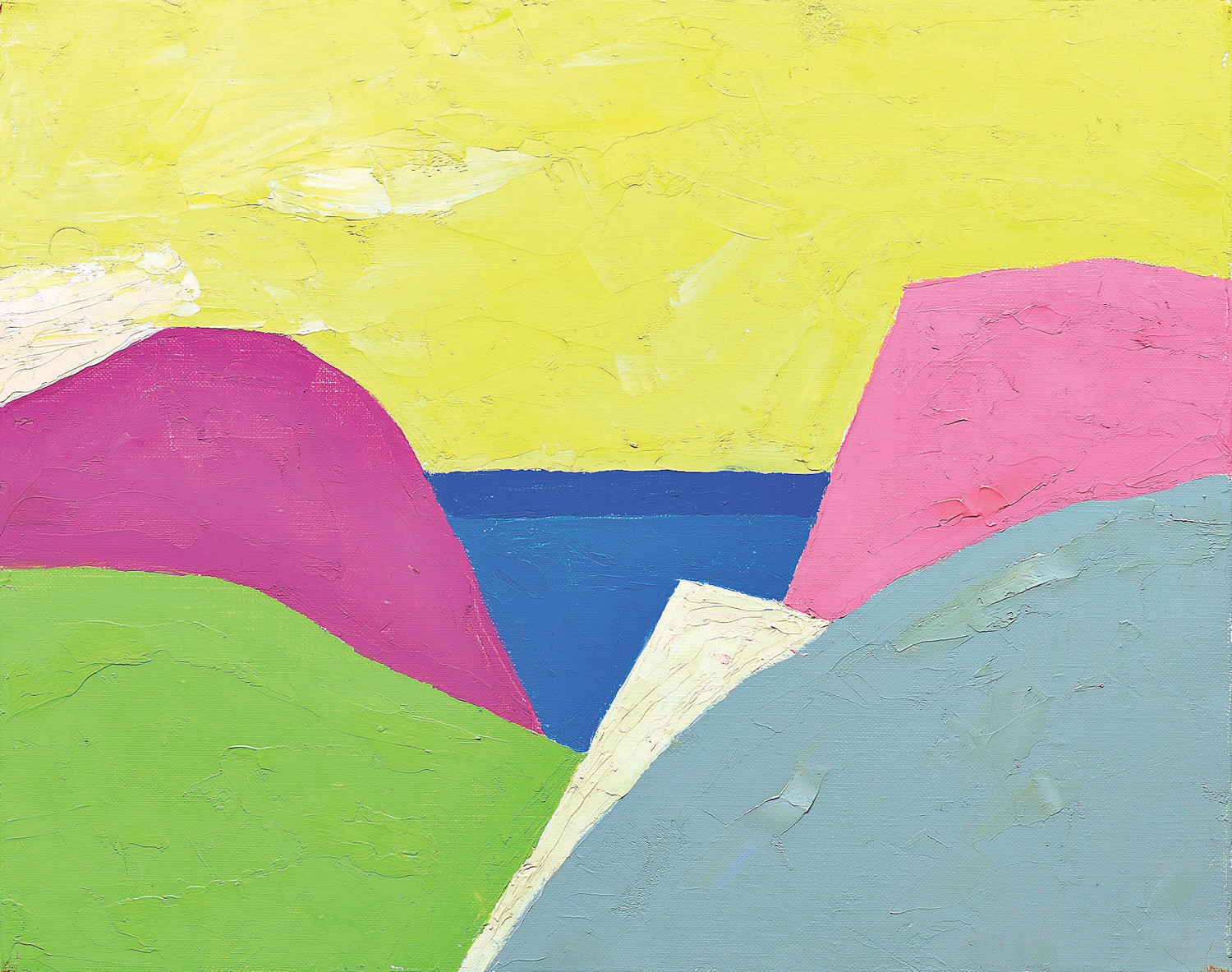 Edel Adnan has quietly seduced the mind and hearts of art lovers and connoisseurs. It took several decades for the art world to understand the power and truthfulness of Adnan’s artistic oeuvre, but she is now achieving her deserved spotlight. Finally being recognized for the fundamental role that she has embodied in aiding theArab-American community, the emancipation of women artists, and the anti-war and peaceful movements.

Edel Adnan was born in 1925 in Beirut, Lebanon, to a Christian Greek mother and a Muslim Syrian father, and received a Catholic education from a French school run by nuns. In a city that was a beautiful mix of cultures, Adnan absorbed all the backgrounds and languages that she was confronted by, and grew with an open mind, curiosity and mental agility. At the age of 24 she flew to Paris to study philosophy at the Sorbonne, and in 1955 - a very important year for Adnan education and personal life - she moved to the United States. Here she pursued postgraduate studies and two milestone universities: Berkeley and Harvard. She decided to settle down in the States where she spent her time teaching and writing, mainly exploring themes such as sense of identity and displacement, history and politics, which would become recurrent in her practise.

Adnan never really left Lebanon as she always felt a strong connection with her native country. By 1972 she decided to move back, as she was feeling very homesick. Once in Lebanon, she found a country very different from the one that she left many years before: as she said “revolutions do not happen overnight” (Leonard Schwartz interviews Etel on Cross-Cultural Poetics. November 9, 2006), Lebanon was already nursing for the civil war, which started in 1975. During this time, Adnan worked as a cultural editor, until 1976 when she decided to move to the United States.

A polyhedral artist, poet and novelist, Edel Adnan is among the prominent voices in contemporary Arab American literature and art. Her practice, both visual and verbal, is characterised by an intense connection with the world. Her art and literature represents a cross-cultural dialogue between the Arabic and American culture: while embracing new medium and artistic expression, new languages and a modern twist, her oeuvre is a reference of traditional culture, education and feelings.

A powerful feminist and anti-war supporter, her art and writings contain many attributions to politics and the violence of wars. In her award-winning novel Sitt Marie-Rose (1978) she explores what are recurrent themes in her poetry: the political and individual perceptions of violence, in response to the Vietnam and Lebanese Civil War, and her experience of separation from familiar cultures, landscapes and languages.

The special thing about Adnan is that through different forms of artistic expression she is able to express different sides of her personality: trained as a philosopher and passionate about peace and liberal movements, her essays and articles are straight forward, rational and resolved. Her artworks, on the other hand, encompass a more lyrical quality, their warmth and depth released from the rigors of formal expression and thought, to position themselves in a sensory experience. Adan says about her work that “is very much a reflection of my immense love for the world, the happiness to just be, for nature, and the forces that shape a landscape” (Artsy, Etel Adnan Biography; https://www.artsy.net/artist/etel-adnan).

Her paintings do not have a political voice, but they reveal Adnan’s strong willingness to engage with the world. The artworks have a profound resonance for her, recalling familiar landscapes and geographies, her homes: Lebanon and California. The reference to the familiar landscapes of her childhood, found in what appears to be the Mediterranean Sea, and of her mature life, with the warmth of the yellows and reds, mountains and horizons, which resemble California, her artworks are windows into Adnan’s memories and feelings. In the artworks, the artist’s response to violence and men’s indifference is nothing but calm landscapes, empathy with the world: they are a moment of reconnection and spaces to remember and think.

Adnan work spans many dimensions: drawings, oil paintings, films, poems, tapestry, political journalism, notebooks, and novels. Her early artworks, made in the 1950s, are intimate in scale and abstract compositions, where the pivotal element is usually a red square, created with a knife and by directly applying colours from the tube. She used this gestural abstract technique to make colours stand out as she was fascinated by their immediate beauty and power.

While she was curious in diving into different materials and techniques, her art always resembles something familiar, she recalls her native country and Arab origins, which are also what makes her works so special and intimate. This appears frequently in her tapestries series, inspired by the emotion and colour of Persian rugs, and the same gesture of sewing recalls the ancient tradition of Arab women.

In 1964 she discovered another medium: the Leporellos. Famous in the Japanese culture, these fold-out illustrated books gave her a way to combine drawing with poetry in a way where she could meld both of her practices. For this series, she integrated Arabic calligraphy together with drawings: she used to copy words for hours, transcribing poems which meant to unfold nature and urban spaces. These artworks exemplify the nomadic nature of Adnan’s life and oeuvre.

Throughout her artistic career, she never abandoned the practice of abstract painting, which particularly unveils her sensitivity to shapes and colours. Painted from remembrance, her landscapes include mountains, skies and horizons represented as squares, triangles, pyramids and circles, all characterised by the employment of bright colours. The intense energy and mysticism of her paintings presents a clear reference to Nicolas de Staël and Paul Klee. Adnan believes that images are never still, but always in movement: “They come, they go, they disappear, they approach, they recede, and they are not even visual – ultimately they are pure feeling” (White Cube, Etel Adnan, 2014).

Etel Adnan gave an immense contribution to the Arabic American culture and literature, to the emancipation of women and anti-war movements. She is a true example that different cultures and mind openness create beauty and progress. With her writing she gave voice to many communities that didn’t have one, while always using calm, polite and secure tones. Her art is still pure energy, full of optimism and passion for the world. Adnan’s message is that “the world needs togetherness, not separation. Love, not suspicion. A common future, not isolation” (Etel Adnan for Hans Ulrich Obrist’s handwriting project on Instagram (@hansulrichobrist).