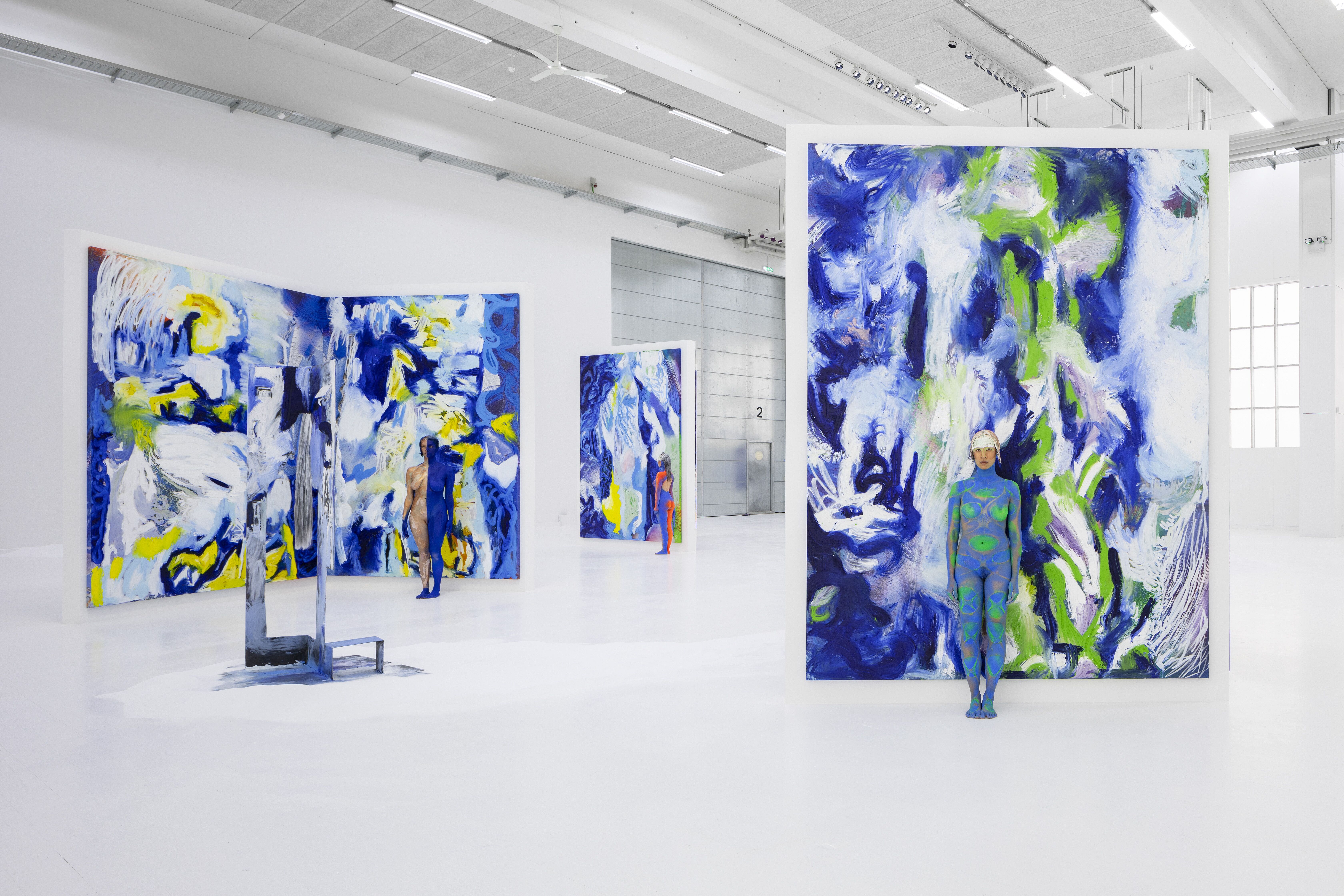 The celebrated artist Donna Huanca (b.1980) has received a lot of attention lately due to her enigmatic paintings. In 2019, she had two solo shows in Los Angeles and Copenhagen; she participated in numerous group exhibitions and her large-scale paintings were acquired by the most reputable institutions and public collections around the world. More recently, Simon Lee inaugurated the artist’s first solo exhibition at its London gallery, conceived as an immersive environment within the confines of the space.

But behind the beauty and frenzy of her characteristic paintings, there is a unique process which departs and nurtures itself from the traditionally intangible mystic of performance art, which in the case of Huanca, concludes with the production of these hypnotic, tangible works of art, resembling something between the aftermath of an acid rave and the spiritual ceremony of an ancient ritual.

Starting with performance art, Donna Huanca creates scenic and immersive environments populated with paintings and sculptures that echo the painted bodies of her women performers, celebrating the naked female form. Working across a variety of mediums – photography, painting, sculpture and performance – Huanca conjures these spirited environments where her audience can completely immerse in its discovery. At the core of Huanca’s practice, there is the female body, which becomes the origin of the artistic process and ultimately results in the creation of these environments and hybrid works of art.

Huanca paints the bodies of her models and later takes inspiration from them to create her fascinating paintings. Every element that is displayed in the space has been created for the performers. The paintings echo the bodies’ compositions, the sculptures are positioned in a way that they become a shelter where the performers can seek refuge. The sound has the function of helping her models keeping the pace while moving across the space, while the scent is there to make them feel relaxed and at ease.

During Donna Huanca’s performances, pictures are taken so that the artist can create collages which are later used as the starting point to compose her paintings. Thus, every performance documentation becomes the ground for new work. Huanca is not the first artist to create paintings by using real-life bodies. After Yves Klein’s Anthropometry events in 1960, using bodies as a medium for paintings has become a common practice in contemporary art.

However, while for Klein the performers were “living brushes” for Donna Huanca they are “living paintings.” This small but radical shift in mentality shows that for her the female body is not only the medium employed to produce a painting but is the main subject. Moreover, although the female body is absolutely central to Huanca’s art, the artist is more concerned with the idea of the body as an alternative surface or medium than she is with body politics. In this way, Huanca deconstructs and fragments the bodies of her performers, to recycle them into a genderless, post-human stratagem that is no longer limited by interpretations of identity.

Moreover, the artist has confessed that live performances in her environments are gradually becoming rarer. At the newly opened exhibition at Simon Lee Gallery in London, Wet Slit, not only were no performances scheduled, but instead, the artist invited a model to rub her body against the wall when the exhibition had still not yet opened to the public.

In this way, the audience is denied seeing the action and is left solely with traces of the body. The stains on the wall, the sculptures and paintings become the only way through which the audience can envision the body and thus the main focus of the exhibition. However, the colours, shapes and materials employed by the artist are so lively that looking at the large canvases and sculptures is like starring at the female bodies that once inhabited the space. Perhaps, the exhibition at Simon Lee Gallery is the beginning of an artistic evolution for Donna Huanca for which tangible and intangible will be so remarkably separated that performances will only happen when no one is looking. If that was to happen the permanent elements will not only become the only elements the public can see and experience, but also the only proof that a body was present in the space at all.