The Formative Friendship between Miró and Calder 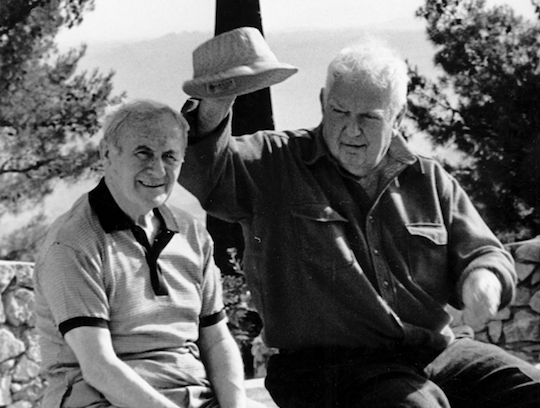 The American artist Alexander Calder and the Spanish painter Joan Miró met in Paris in 1928, where they both had their studios, and since then they grew a relationship that was both personal and intellectual. Their encounter happened during a crucial period for the development of modern art and they met frequently in both Paris and Spain.

During the 1930s, the socio-political scene in Europe and America was characterised by an aura of terror and dismay due to international conflicts, which eventually resulted in WWII. The political tensions that aroused at the time, ended up impacting every aspect of the life of the citizens of the countries involved. Moreover, the countries that remained out of the global conflict, experienced problems on their own. Spain had just gone through a civil war that left the country in total sorrow, moreover, areas of the country such as the Basque Country had been used as ground for exterior powers to experiment with warfare material, as illustrated in Pablo Picasso’s painting Guernica (1937). In this unstable and miserable political and social environment, artists played a crucial role in transmitting cultural and political ideas, standing against violence and seeing the rise of different cultural movements, such as Surrealism, which developed out of the Dadaism of WWI. Surrealism invaded both spectrums of arts and literature, exploring the potential of the subconscious mind. During such times, both Alexander Calder and Joan Miró became interested in investigating and expressing their inner self through their art.

When in Paris, Miró grew a very precise painting style: organic forms and flattened picture planes drawn together with sharp lines. Although Miró’s work was often categorised as Surrealist due to his interest in Automatism and his usage of sexual symbols, he refused to become member of any interwar artistic movement. Miró’s surrealist reputation was attributed to him by suppression, in particular due to his Catalan origins and affinity, which was subject of persecution during Franco’s regime in Spain. Thus, during the 1940s, his inspiration became more oneiric (related to dreams) and his subject matter more connected to the cosmic world.

On his part, emerging from his engineering roots, Alexander Calder changed the course of modern art by developing his revolutionary mobiles: sculptures which hung from the ceiling, suspended in space. Drawing inspiration from the Futurists and Constructivists, Calder created these sculptural objects incorporating wires and abstract shapes that fluctuated in the air in perfect balance. His mobiles soon became a trademark to his practice, and were described by art critics as “drawings in space.”

In addition to a mutual admiration and a close friendship Calder and Miró shared many artistic principles, such as the usage of pure colours and abstract forms. During the 1930s, they exhibited together in many group shows, the first one being in 1932, followed by a larger group exhibition in 1933. Most importantly, in 1937, the Spanish Republican government commanded both artists to create a set of new works for the Spanish Pavilion at the World Fair in Paris, where their works were exhibited next to Pablo Picasso’s legendary Guernica. Their synergy was so evident that Calder’s mobiles were described in 1936 by The New York Times as “living Miró abstractions” and in 1937, they had their first joint exhibition at the Honolulu Academy of Arts.

But the most astonishing fact about their artistic relationship, which so perfectly illustrates the calibre of their mutual influence is best represented by the body of works Constellations, which each artist simultaneously realised during WWII when the two had no way to communicate. Constellations not only confirms that the two artists shared the same artistic notions, but it also demonstrates how they thought and acted in alignment. While for Calder the decision to name his series Constellations was voluntary, as suggested by his dear friend and fellow artist Marcel Duchamp, initially, Miró only used the term to refer to one of his paintings. However, by the end of the 1950s, both Miró and Calder’s works converted to the same name for their similarity and since then it has been natural for art critics and curators to link the two bodies of work together.

For Calder and Miró, the Constellations series represented a way to explore their inner thoughts. Yet, while the two artists were influenced by the Surrealist idea of the unconscious mind being the most authentic birthplace of inspiration, they individually developed their imagery through their own personal experiences during the war. Miró created Constellations between 1939 and 1941, when he was in Spain trying to escape from the fascist regime. The 23 works from the series witness the inner evolution of the artist as he continued his journey to find refuge from the fascists. The earliest works represent a sense of anguish; the earth and celestial figures, typical of the artist’s iconography, look in pain and are often depicted towards the bottom of the paper. Contrarily, the latest ones, which were produced when Miró finally reached the island of Palma de Mallorca, where he felt safer, show a new sense of openness; the human figures fluctuate as the force of gravity disappears, transmitting a sense of lightness.

Joan Punyet Miró, the artist’s grandson, said in an interview that, “The Constellations are a sublime break. They are the way to the power. Towards the universe. They area door to escape from a circumstantial war, from a genocide, from the brutality of nonsense". While for Miró the Constellations series represented his career zenith, for Calder, Constellationes represented a significant body of work, but not the central one.  Astronomy was indeed an interest of Calder from an early age and he often explored the idea of the cosmos in his work. In this regard, his series Constellations can be seen as a continuation of the work Universes which he realised in the early 1930s.

Constellations shows that in addition to similar creative sensibilities, the two men shared much more in common. On one hand, they both recurred to the usage of interlacing, uninterrupted lines to create shapes and creatures and of a naughty, childlike playfulness. On the other, they reflect their own very distinguished personalities: Calder being more light-hearted, naïve and cheerful; while Miró wanted to frighten the viewer through his innocent looking shapes, illustrating the dark side of humanity through distortion and fragmentation.

Not long after Miró finished his series, Calder started employing wood in his work. This technical decision was not only driven by the fact that metal supplies shortened during the war but was also a thoughtful decision which enabled him to show his support for the army. Hence, the sculptures from this period include some hand carved wooden abstract shapes and are characterised by an unusual stillness. In fact, when in 1943 Calder opened a solo show at Matisse Pierre Gallery to showcase them, to the surprise of the audience, nothing was moving.

In 1943, after two years of the completion of Miró’s Constellations, the Museum of Modern Art in NewYork helped the Miró smuggle 22 of the paintings out of Europe, which were later exhibited at Pierre Matisse Gallery in New York in 1945 - the same gallery were two years earlier Alexander Calder exhibited Constellationes. About his show Miró wrote that it “should not be considered as a simple artistic event, but an act of human import” because his paintings were “realised during this terrible time when (the fascists) wanted to deny all spiritual values and to destroy all that man holds precious and worthy in life”.

After WWII, Calder and Miró’s friendship kept growing until Miró passed away 1983. In 1971,Calder donated to the Fundació Joan Miró the work Mercury Fountain, which was exhibited at the World Fair in 1937 alongside works by Miró. The year later, Miró wrote a beautiful catalogue text for a Calder’s exhibition in Palma de Mallorca, which took the form of an illustrated poem.

Miró and Calder’s Constellations series were most recently exhibited in conjunction in New York in 2017, when Acquavella Galleries and PACE started a collaboration. Acquavella secured Miró’s paintings, while PACE Calder’s sculptures. The joint exhibition Calder/ Miró: Constellations displayed over 60 works that varied in medium from sculptures, to paintings and works on paper, none of which were for sale. The exhibition was an incredible chance for the audience to see with their eyes how the two painters fed of each other.

Their synergy, friendship and artistic alignment have become a myth in the art world. Still today, Calder and Miró’s grandsons, both leading each artist’s foundation, have a close relationship, which has allowed many collaborations between the two organisations to take place. As Miró’s grandson said, “The communion that existed between Calder and Miró was mystical.”