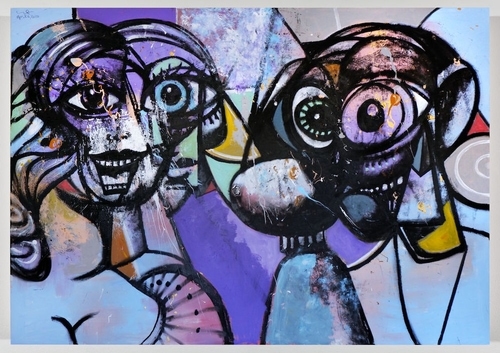 A recent webinar, hosted by Art Basel and UBS, invited Dr Clare McAndrews, founder of Art Economics, Noah Horowitz, Director Americas for Art Basel, and Paul Donovan, Global Wealth Management Chief Economist at UBS, in a conversation about the art market post-COVID-19, mediated by Melanie Gerlis, Art Market Columnist and Contributor at the Financial Times. The discussion focussed on what kind of damage and consequent recovery we might expect (emphasis on might—no one can be certain) post-crisis.

Made in Bed writer Vienna Kim, also felt it is crucial to convey information in a concentrated and clear manner. Consequently, in this ‘The Art Market post-COVID-19’ piece, research has been gathered, not only from the recent Art Basel x UBS webinar, but across several news sources and professional commentary, to inform readers on what the general current feeling is about what will happen to the art market after the fiasco subsides.

Dr Clare McAndrews began by stating that recovery may be tilted towards larger galleries, who had the capital to be prepared for crises such as this one. Indeed, a survey conducted by The Art Newspaper revealed that around a third (33.6%) of galleries don’t expect to survive the pandemic, and it is the middle-weight and smaller galleries that will suffer the most. This is a worrying statistic, as the art ecosystem relies on small to mid-weight galleries to discover and support new and emerging artists, and the top-down structure of the art market can only become further fortified and less democratic as smaller establishments sadly close their doors.

In a more positive light, however, Noah Horowitz remarked that this period is likely to see a lot of innovation and experimentation—perhaps even a restructuring of how the art market runs, though in what ways, precisely, are yet to be seen. Horowitz compared our current economic decline with the recession in the 1990s, in which several major alpha galleries (PACE, Hauser & Wirth) began operating, and art fairs began to boom. Horowitz also noted that taste may change. Just as the 90s saw a rise in the interest of contemporary art, such as the YBAs in the United Kingdom, our current pandemic might also see a shift in what the art market sees as favourable. As the art market turns de facto digital during this time, could it be tech art’s moment to shine?

Paul Donovan addressed the fact that much of the economic data we see at the moment are likely to be inaccurate, as these reports rely on people taking surveys, and Donovan humorously noted that no one is in the mood to take a survey these days. However, the UBS chief economist felt positively about the art market’s recovery, albeit McAndrews predicts we may see a ‘U’ rather than a ‘V’-shaped bounce back. Donavan cleverly provided an analogy: the art market during the crisis is like a light bulb. As operations have ceased, the light bulb is now switched off, but when we switch it back on again, will it even work? Donovan responded in the affirmative. He said that the wealth that art market consumers are saving at the moment is likely to be spent once doors to galleries and art fairs re-open, and people will have the extra income to start shopping for fun. Luxury goods, including art, fall into this spending-for-leisure category.

The conversation inevitably turned towards the digitisation of the art market. All contributors agreed that digital was here to stay. The art market has been notoriously slow to integrate to online means of buying, selling and sharing art works, but the current pandemic accelerated the move, with Frieze having recently concluded their very first online viewing rooms, and galleries and museums moving their collections online. Noah Horowitz was pleasantly surprised by the price transparency that the online experiences offer, and in the future, the art world is likely to see a more hybrid system of offline and online operations. Logistics and payment systems may move online, for example, but, as Horowitz commented, ‘the art market is a social beast.’ So it seems like opening parties and viewings are (happily) here to stay.

In a final note, Melanie Gerlis asked each of the speakers what was one lesson that could be learned from the COVID-19 pandemic. I leave you with Paul Donovan’s message, which I believe is a note of optimism and hope for us all:

“Change. That’s scary for people. Remarkably, for a species that has thrived on change, people don’t actually like [it] very much. I’ve been in this job for three decades now, and I’ve been through various crises and so on, and the one common thread that comes through upheaval and change is we always always underestimate the ability of humanity to adapt to changing circumstances. So you know what? Yes, the future is going to be different, but the future is going to be okay.”