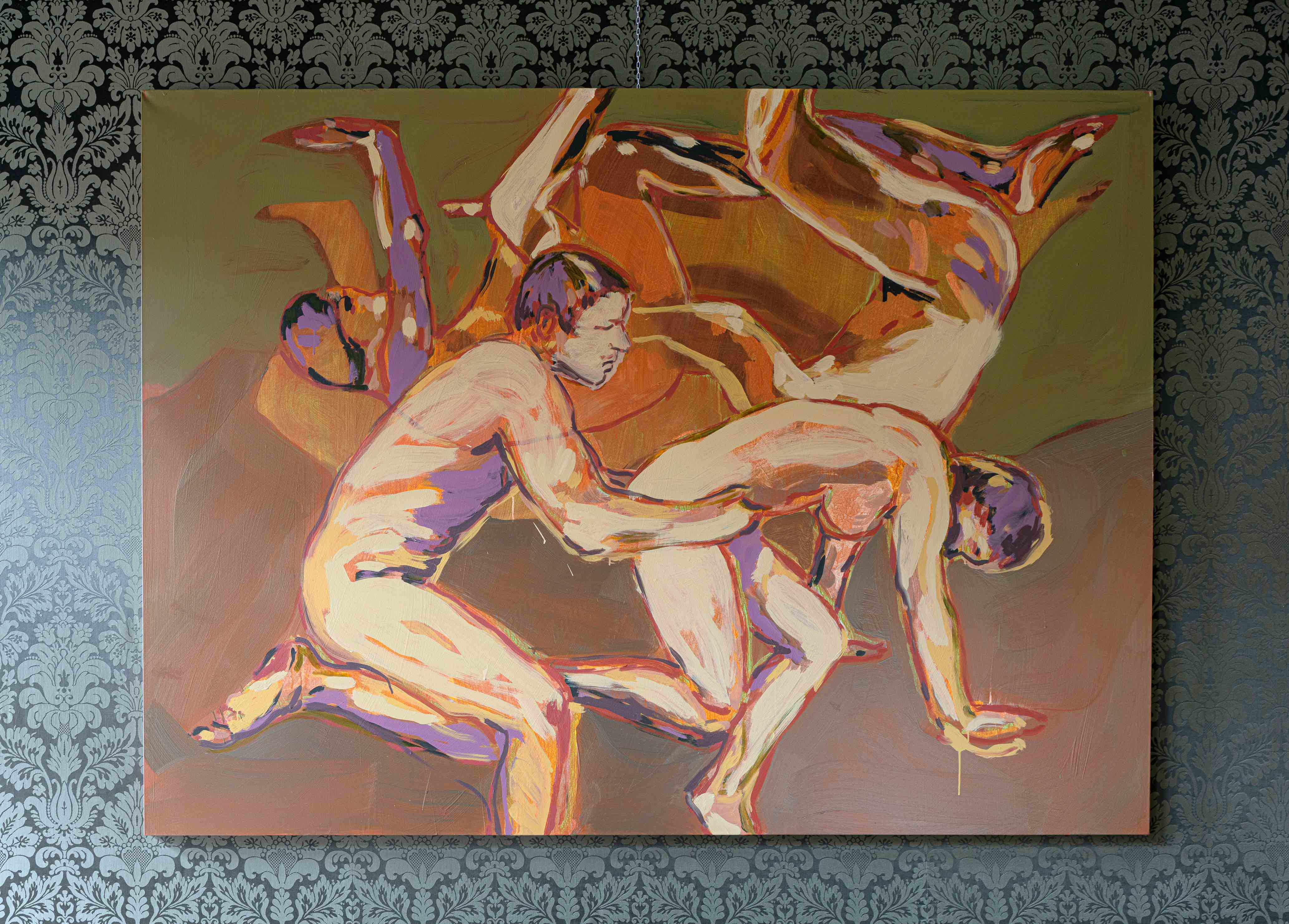 “The nude is not the naked. It is a conventional product, the result of thousands of years of conscious and unconscious effort and much hard thinking” - Bernard Berenson, Aesthetics and History (1950)

The naked body has captivated artists and fascinated audiences for centuries. To the Greeks and Romans, the male nude was a symbol of the physical perfection that the human body was capable of achieving. The ancestry of the female nude however, is distinct from the male. Where the latter originates in the perfect human athlete, the former embodies the divinity of procreation, imagined as life-giving and seductive.

The nudes of ancient Greece and Rome became normative in later Western art, with their conceptually perfected bodies: each one a vision of health, youth and beauty. This Greco-Roman nudes and the legacy they left behind express profound admiration for the body as the shape of humanity, yet they do not celebrate human variety; they may have sex appeal, yet they are never totally prurient in intent.

This emphasis on idealisation derives to an essential issue: seductive and appealing as Greco-Roman nudes in art may be, they were meant to stir the mind as well as the passions, rather than effectively portray the perfectly natural, humble conditions of the states of undress present in everyday human life, from birth to the bath.

With this in mind, Corpo e Mente brings together five artists who have challenged the traditional view of the nude to explore the attitude of the time in which they were created; where the portrayal of the naked human body is either about female objectification or male heroism, ideals still very present in today's cultural landscape, or a critique of them. From the seductive, heteronormative nude of Tom Wesselmann, to the intimate tenderness of George Rouy's homosexual couple, to the violent and provocative qualities in Claire Tabouret’s painting or the fragility of Georg Baselitz’s ghostly naked man; Corpo e Mente offers an unbridled vision of the nude through which to contemplate on further topics rather than just perform an act of artistic voyeurism.

Tom Wesselmann’s seminal Great American Nude series effectively propelled the artist to the forefront of the American Pop art movement of the 1960s, setting him apart from fellow Pop artists like Warhol and Lichtenstein, whilst helping to shape his distinct, artistic identity. The works embody a combination of dense cultural critique and crude artistic expression—intellectually stimulating and visually captivating. With this series, Wesselmann implemented the vibrant colours and commercial imagery of Pop art to revisit and rework the timeless subject of the female nude.

Study for Bedroom Painting #2, 1968 is a great example of these explorations and recalls the sultry, odalisque women frequently featured in the works of 20th century artists like Willem de Kooning and Henri Matisse, both of whom Wesselmann greatly admired.

The painting showcases the artist’s unique ability to simultaneously critique and celebrate American society in the 1960s, exploring and exposing the allegory of the American Dream. During a time when artists were growing increasingly upset by the manner in which conformity and mass consumption had come to define the American identity, Wesselmann embraced these forms in his work. He controversially unveils the parallels between recognised examples of fine art and the widely consumed, frequently reproduced images of mass media.

Borrowing from a wide range of sources—the 19th Century European Salon, the post-Impressionist landscapes of Arles and the emerging, iconic imagery from mid-20th century America—Wesselmann created the possibility for fresh meanings and new conversations. Full of irony, his nude paintings candidly challenge the conception of high art in America, forever impacting the trajectory of American Pop art.

Andiamo, la porta è aperta, 2016 presents an elusive self-portrait that focuses on the human body yet makes that body difficult to approach or perceive. This reference to the self, combined with the artist’s confrontation towards the very limits of colour, material, and composition produces an ever-expanding work in dialogue with precedents, including his own. Drips of paint create a tangled vascular system for a ghostly, even weightless, figure. Its milky-white, partly translucent body oozes down the canvas, the head already beyond the edge.

In 1969, seeking to free painting from the constraint of immediate comparison to reality, Baselitz began creating compositions that appear first as abstractions, but slowly resolve as representational works. More than four decades later, he continues to seek atmospheric effects that impart to the viewer the sensation of peering through a vaporous void to discover ambiguous bodies within. Made after the Avignon paintings featured in the 2015 Biennale di Venezia -a series of eight towering vertical canvases, each containing a single visceral figure- Andiamo, la porta è aperta, 2016, with the intentionally obscured use of colour, conveys the sense of the body through the materiality of paint.

"This idea of “looking toward the future” is nonsense. I realized that simply going backwards is better. You stand in the rear of the train—looking at the tracks flying back below—or you stand at the stern of a boat and look back—looking back at what’s gone." — Georg Baselitz

Georg Baselitz has had a profound influence on international art since 1960 and is indisputably one of the most important artists of our time. He shaped a new identity for German art in the second half of the 20th century; in reaction to the trauma and tragedy of the Second World War, he developed an artistic vocabulary which draws on the work of his forebears, whilst remaining unique and wholly individualistic.

Sincerity comes up a lot when Rouy speaks about his art. Working mostly in figurative painting, the 24-year-old is interested in making work that has “a human aspect, a kind of emotion, a softness.” Knowing this changes the way you look at Rouy’s paintings of tubular figures that bend and flex across his large-scale canvases. In their exaggerated curves, his stretchy pink-toned figures could resemble the generous, rounded shapes of, say, Picasso’s neoclassical period, but really, Rouy is much more concerned about making work that produces a feeling, and one that’s extremely personal.

While he’s definitely interested in how other people respond to his work, ultimately the purpose of his painting lies in a personal – albeit ambiguous – representation of his relationships with other people and to himself. “I think at the moment I can only refer to myself and my own feelings about certain things,” reveals Rouy. “What I found by doing that though is that someone else can relate – it has an impact that way.”

When asked about why he thinks people have such a strong connection to his work, he responds with candour:

“You know what? I’ve no idea. I don’t really care too much. I think there’s an honesty and sincerity – I’m doing it for me. I’m doing it because I really love it. If it resonates with people to a certain extent, I try and maintain that sense of sincerity.”- George Rouy

Claire Tabouret’s painting Born in Mirrors, 2018 is permeated by a certain violence: bodies in search of a stability that they don’t seem to be able to get hold of unless through domination. The vehemence of the body language is also that of the painting itself. The drawn silhouettes contrast with a barely painted and discoloured background.

In her previous group scenes it is already possible to perceive an underlying anxiety, made real by the way in which the characters sometimes find themselves tied up and muddled by their clothes, their hair. In Born in Mirrors, 2018 it is the bodies themselves that come together, even joining in the paint itself at places, where we see the paintbrush move from one to the next. Here too the question of individualisation is at stake, but in relation to the couple. The artist likes to recall Oscar Wilde’s question to the effect that when two are one, which one?

In her painting Born in Mirrors, 2018, however, the bodies embrace without ever merging or blending into one another. On the contrary, their tension seems to make use of the dynamic between impulse and repulsion. Facing each other, embracing one another, freeing oneself from the other: this language of bodies is also the language of dance, which Pina Bausch describes as close to the game of love. To the need to be loved, to the desire to be watched.

To paint the gaze of desire but also the desire of that gaze: it is this mirror-like interplay that the artist stages in her latest works. Through the intensification and the inversion of the motif, conflicting couples face each other, referring us back to our own position as watchers.

“It’s all about the gaze. When you paint, or sing, or write, you’re expressing something to someone, you’re trying to attract someone’s – be it the public’s – attention. There is something that exists in the eye when you desire someone. In a relationship, you exist in mirrors. In the eyes of the other, you see yourself. In this particular show, it has a lot of to do with the eyes of the lover. I need to see myself with their eyes. It’s also the eyes of the viewer. Often imagery about sexuality is pornography. All of which is choreographed or composed or imagined for the viewer. It’s the main reason for its existence. The people who are acting ‘natural’, trying to pretend they’re doing something, are in fact very conscious of being watched, and in this sense, of the mirror. I was very triggered by this idea of an image which has been conceived to be viewed, because a lot of images we create nowadays, are done so by a very instantaneous mirror, with the intention to be seen, for example selfies and social media.” -Claire Tabouret

Usually, an artist's “early work” refers to pieces completed at the start of his or her career. In the case of modern master Pablo Picasso, however, the oldest examples of his prolific artistic talent date back much further—beginning, unbelievably, when he was just a child. Picasso was born in 1881 to an artistic set of parents. His father taught him formal drawing techniques from an early age, and by the age of eight he was skilled in oil paint.

Over the next few years, Picasso produced academic drawings and paintings that illustrated a rapid improvement, highlighting his advanced understanding of classical art fundamentals, including human anatomy. At just 13 years old, Picasso officially began his career as an artist. During these formative years, he developed a realist style characterised by naturalistic brushwork, a true-to-life colour palette, and everyday subject matter.

From 1897, however, Picasso's paintings took on a less lifelike quality. Undoubtedly influenced by Expressionist Edvard Munch and Post-Impressionist painter Toulouse-Lautrec, these pieces—like Naked Man, Seen from Behind, 1899  —convey Picasso's growing interest in experimenting with a more freeform, avant-garde style.

“The world today doesn't make sense, so why should I paint pictures that do?” -Pablo Picasso