Spilling Over: Painting Colour in the 60s and 70s 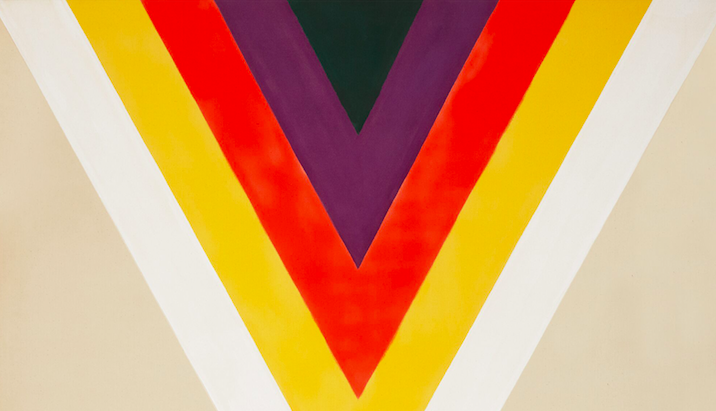 In 2019, the Whitney Museum of American Art organised a major exhibition gathering the works of artists active during the 1960s and early 1970s, to show how their urge to create something new gave birth to bold and colourful works. The show featured artists like Josef Albers, Helen Frankenthaler, Sam Gilliam, Carmen Herrera, Morris Louis, Kenneth Noland, Miriam Schapiro and Frank Stella among others; all artists that used saturated, hallucinatory acrylic colours to activate the viewer’s perception.

The revolution of social norms about clothing, sex, gender and other formalities that occurred at the time,  had an undeniable impact on the Art World. Artists started pulling away from what they knew and approached new painting techniques and subject matters. Colour became an element that could carry a formal problem as well as a political statement.

This interest in colour and perception translated into different artistic languages; Colour Field painters poured paint and stained unprimed canvases to dramatise the materiality of painting and its visual force. Op artists developed patterns, geometric abstractions and intense colour combinations to highlight that vision is commonly of physical response and unconscious association. While, an emerging generation of artists of colour and women explored colour’s capacity to articulate questions about perception of race and gender.

Kenneth Noland was an American painter better known for his association to Colour Field painting, an artistic style that developed in New York City during the 1940s and 1950s, when young artists started breaking from Abstract Expressionism. Colour Field painting tried to eliminate the artist’s gesture and angst, typical of the past, in favour of the production of large fields of flat and solid colour picture planes.

The movement is mostly associated to Clement Greenberg, who referred to it as Post-Painterly Abstraction. In 1964, he curated a namesake group show - that included Noland’s work - which helped to establish Colour Field as the new main contemporary art movement.

Noland began experimenting with this new technique in the early 1950s, when in Washington D.C., together with Morris Louis, he met Helen Frankenthaler and learnt her ‘soak-in’ technique, which allowed thinned paint to soak into unprimed canvases. With the aim of moving the attention from the artist to the piece, Noland painted with rollers and sponges alongside with traditional brushes.

Noland employed simplified abstractions so not to detract from the main subject: colour. His preoccupation with the relationship between image and the containing edge led him to always produce his works in series, creating regular schematic compositions with different combinations of colours; starting with circles, moving to chevrons and diamonds.

In 1966, he composed a series of horizontal stripes of pure colour. This series represents a perfect example of Noland’s mantra of using simple patterns to drive the spectator’s attention towards the effect of colour.

Throughout his career, Noland remained one of the main representatives of Colour Field painting; even between the 1970s and 1980s, when he became a pioneer of shaped canvases, creating asymmetrical diamonds and chevrons, his concern remained to produce sophisticated and controlled color and surface integrity.

While Colour Field painters employed simple abstractions and colour to explore formal concerns, other artists employed these to reference socio-political issues. Miriam Schapiro explored how geometric abstraction could serve also feminist concerns. Over her career, she experimented with a variety of mediums like paintings, drawing, textiles and sculptures. She is known for founding the Pattern and Decoration Movement (1975– 1985) and co-founding the Feminist Art Program with Judy Chicago.

As Noland, Schapiro started her career by creating paintings that drew from the tradition of Abstract Expressionism, producing works that were hypnotic, mystical and revealed her mastery of colour and technique. However, at the beginning of the 1960s, she began to eliminate the brushwork and introduce a variety of geometric forms. Between 1961 and 1963, she created a body of work called the Shrines, a quasi-Surrealist, geometric compositions which contained figurative references to femininity and art history. Although being quite innovative and gravitating towards the new trends, these works did not fit in any of the movements that were going on at the time.

The turning point for Schapiro was when in 1967, she moved to California. There, with the help of her close friend David Nalibof, a physician at the University of California, Schapiro discovered the potential that computers had in assisting artists with preliminary sketches. Being already interested in hard-edged, abstract and minimal imagery Schapiro realised that she could employ this technology to adjust her sketches until the perfect image emerged.

Although at the time Schapiro was not yet directly linked to Feminist art, she employed the computer to create geometries that resembled apertures and passage ways that evoked the female body. Her first computer-aided body of work, Big Ox #1 (1968) depicts an ‘O’ at its centre, evocative of the female womb.

Between 1967 and 1971, Schapiro was considered as the pioneer of the then rising field of computer-aided art, showing that her art did not only lean onto feminist issues but also contained formal concerns.