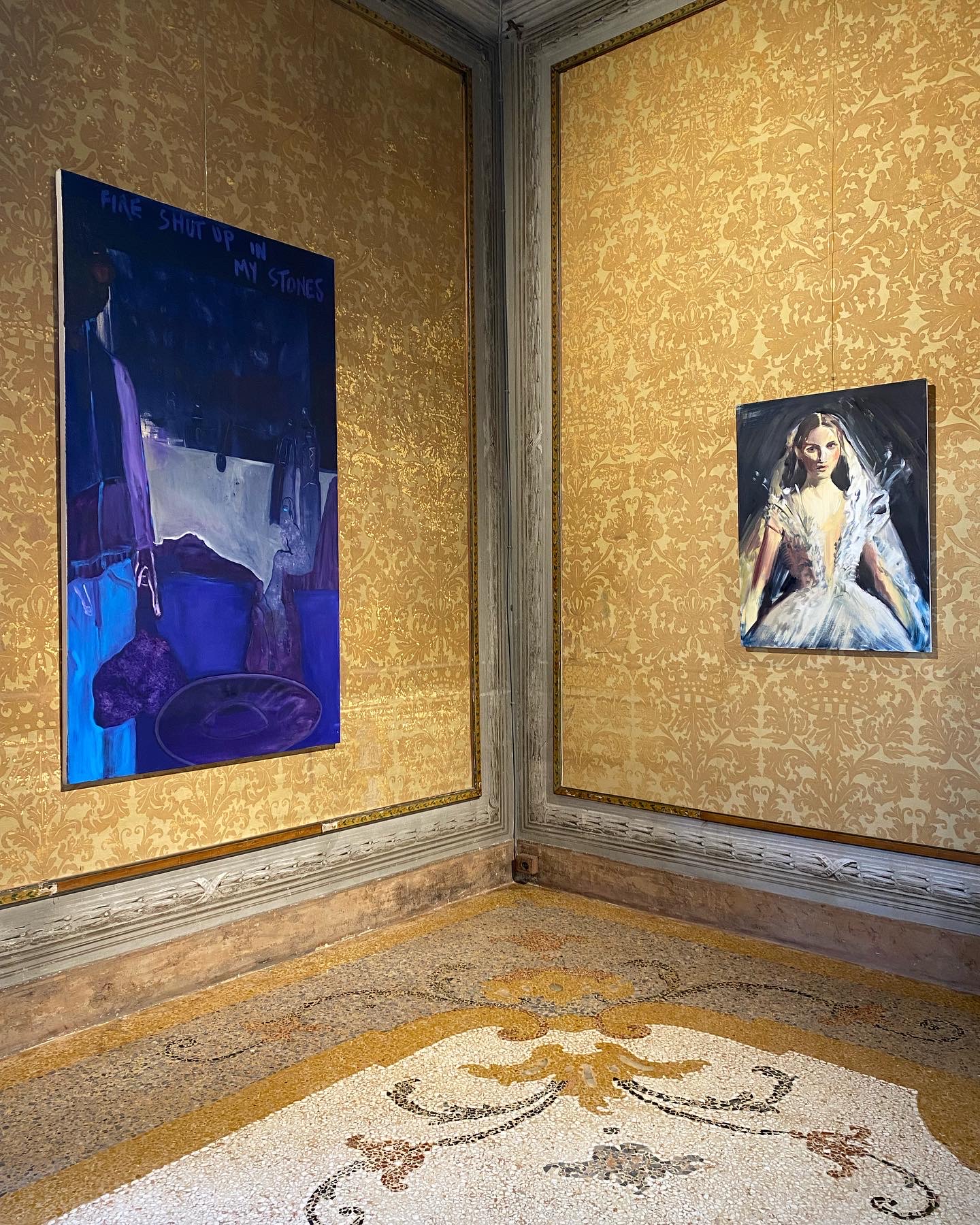 In rhythm with the theme of this year’s Biennale, our exhibition Corpo e Mente is a contemporary representation of the human form, exploring the different ways in which artists today depict ideas of identity. At Palazzo Barbaro in Venice, the exhibition brings together an array of critically acclaimed artists whose work delves deep into the human psyche to convey notions of gender, race and sexuality.

Using the body as a means to express their minds and sentiments, the artists in this exhibition approach the portrayal of the human body in a raw and audacious way; where soul and anatomy fuse together to configure a plethora of personalities. Flirting between abstraction and figurations, these characters are often too allegorical, often too explicit; but all powerfully relatable. Challenging the ways in which the human form has traditionally been depicted in art history, each of the artists exhibited presents through their work an alternative way to see oneself in relationship to the world around us, allowing the viewer to reflect on notions of both individual and collective consciousness.

On the occasion of the exhibition opening, we speak to the artists Ellie Pratt, Jenny Morgan, Andrew Pierre Hart and Alex Foxton about how they approach the depiction of the human figure how does it relate to their own persona.

Ellie Pratt’s works draw upon the psychological tension of women fulfilling a directed role in fashion photography. In Pratt’s work the objectification of women is heightened by exposing the dynamics of the male gaze as perpetuated through the published image.

"Painting is naturally a reflection of the self and the image of the female figure holds so many historical and cultural complexities but what is most important to me is the lightness and immediacy within the act of painting. To be able to leave behind the weight of context and enable the painting to hold a moment is such an empowering gesture. Perhaps what I'm seeking from depicting the female form in this way is an intimate space to unconsciously gather, harness and abandon an emotive energy within myself." -Ellie Pratt

Born 1982 in Utah. Lives and works in Brooklyn, New York.

Technically intricate with a haunting quality, Morgan’s paintings experiment with psychological visual realism, obscuring the physical to expose the spiritual. She obfuscates the portraits’ meticulous details by annihilating their likeness, stripping away layers like physical and spiritual wounds, while retaining a striking intimacy. Like an archeologist, she digs to discover the subject’s identity. Her corporeal but also ethereal portraits become almost supernatural portrayals, hovering between the spheres of the known and the unknown. Her intensely personal work examines the complexity of human relationships and the multiplicities of self-awareness. Her subjects sometimes hold objects as metaphors for their personalities.

“My approach to depicting the human body is grounded in presence and realism. I have a deep curiosity for the psychological nature of my subjects, and place great importance on a portrait’s ability to possess a human spirit or a sense of aliveness. I view the concept of persona as a tool—the persona, or mask, can disguise identity, especially as it relates to the self. I often work with a subject who I consider to be my doppelgänger: she is her own being, but also acts as a malleable mirror. Working with the body is often a heavy, self-reflective journey filled with light and dark material, both of which require emotional processing—the persona offers a mask of protection, which then creates space for deeper exploration into both ends of the optic spectrum.”  —Jenny Morgan

Andrew Pierre Hart explores the symbiotic relationship between sound and painting through ongoing rhythmic research and play between improvised and spontaneous generative processes. The artist’s practice questions the many formalities and dialogues around painting. His works explore somatic responses to ideas relating to sound including acoustic levitation, spatialisation, the human as a vessel of sound and the creation of physical and theoretical space. Deeply influenced by music, Hart’s work is a renegotiation of the visual language and legacies of Western abstraction, probing connections between the phenomena, language and representation of sound in painting. He holds an MA in Painting from the Royal College of Art (2019) and BA inFine Art from Chelsea College of Arts (2017) and he was includedin the show Mixing It Up: Painting Today, Southbank Centre, Lon-don (2021).

“The first thing you will usually notice with the male figures in my work is the signifying form for the black figure being the hair; it really indicates my interest in the idea of a black aesthetics or stylisation, celebrating difference and what it can bring to the dialogue of contemporary art and widening conversations. The female figures are often protagonists and leaders of the sound experiments enacted in the paintings, however, they are placed at junctures, where the position doesn’t always seem to be dominant, which puts into question how we think of positionally, theoretically as well as physically. This all ties back to my understanding of composition and reading painting but also questions what we instantly read or understand when faced with an artwork; a kind of debunking of ideas of what we think we see. In the work, there are three male figures and free female figures, this balance or pairing, is a way of thinking about listening, hearing and reciprocation… I feel we are at a listening phase in life, sometimes it feels like a stage, an opera, a movie or the grand story we call life…” - Andrew Pierre Hart

Born in 1980 in England. Lives and works in Paris.

Alex Foxton’s painting takes traditional images of masculinity, deconstructs their archetypes and reveals their complexity and ambiguity. He explores the personal history of the heroes or mythical figures that inhabit our western culture, painting a new narrative. The figures depicted are stretched, torn be-tween a calm face and an expressive body, tortuous or ecstatic, underlining the tension of each character. Alex tries to get rid of the objective and dominant gaze that shapes these virile male figures to reveal an embodied vision and to let a desire for these bodies come to life. Foxton broadens hips and shoulders and minimises waists and jawlines to create androgynous male figures and sensual portraits that recall Modern masters Picasso and Matisse in their acrobatic forms and flat colours.

"In my work the body is the arena where ideas and impulses play out. The figure is a stand in for the viewer, for myself, or for painting itself. This is why my figures are usually an amalgam of found images, observation and pure imagination. I’m hoping that the viewer connects as fully as possible with the image and the physical presence of the painting. The diptych in the show is an attempt to present two different sensibilities at once - one that is symbolic, dreamy and light; the other representative, graphic and bold. I hope the effect is of a contradiction that is never fully resolved, but is somehow peaceful, the way we live with the two sides of ourselves, the inner self and the outside presentation." -Jenny Morgan