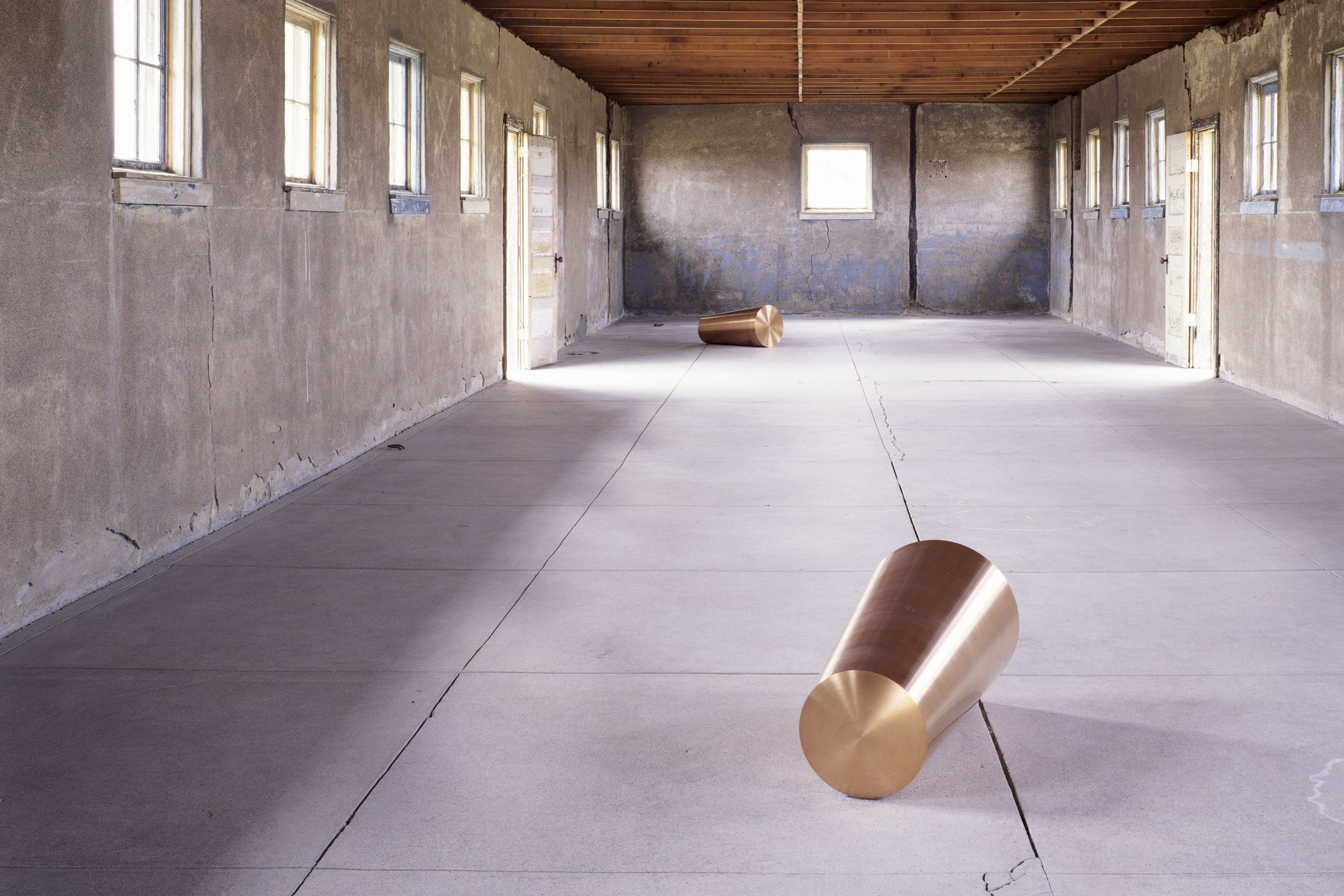 Minimalism emerged in New York in the early 1960s among artists who were self-consciously renouncing recent art they thought had become stale and academic. A wave of new influences and rediscovered styles led younger artists to question conventional boundaries between various media. The new art favoured the cool over the "dramatic": their sculptures were frequently fabricated from industrial materials and emphasised anonymity over the expressive excess of Abstract Expressionism. Painters and sculptors began to avoid overt symbolism and emotional content, instead calling attention to the materiality of the works.

Minimalists created works that resembled factory-built commodities and upended traditional definitions of art whose meaning was tied to a narrative or to the artist. They called for simple, three-dimensional, geometric forms that were stripped of any illusionism, iconography, or personal expression and made using industrial processes and materials like plywood, aluminum, and plastic. The use of prefabricated industrial materials and simple, often repeated geometric forms together with the emphasis placed on the physical space occupied by the artwork led to some works that forced the viewer to confront the arrangement and scale of the forms. Viewers also were led to experience qualities of weight, height, gravity, agility or even the appearance of light as a material presence. They were often faced with artworks that demanded a physical as well as a visual response.

Despite the movement being largely male dominated -with Sol Lewitt, Frank Stella or Robert Morris at the forefront of its ethos and practice- a significant number of female artists pioneered its development and made grand contributions to the genre. Often overlooked, in the list below we shine a light on these women whose minimalist, or post-minimalist, approach to art making made, or is making, a revolutionary impact in the history of art, from the 1960's to the present:

Mary Corse investigates materiality, abstraction, and perception through the subtly gestural and precisely geometric paintings that she has made over her fifty-year career. Corse developed her initial work during the emergence of the Light and Space movement in Southern California. Throughout the 1960s, she experimented with unconventional media and supports, producing shaped canvases, works with plexiglass, and illuminated boxes. In 1968, Corse discovered glass microspheres, an industrial material used in street signs and dividing lines on highways. Combining these tiny refractive beads with acrylic paint, she creates paintings that appear to radiate light from within and produce shifts in appearance contingent on their surroundings and the viewer’s position. Corse’s art emphasises the abstract nature of human perception, expanding beyond the visual to include subtleties of feeling and awareness.

Agnes Martin was one of the most influential painters of her generation and left an enduring mark on the history of modern and contemporary art. Interested in the transcendent potential of painting, Martin was a contemporary of the Abstract Expressionists, and identified her work with the movement. Nonetheless, her oeuvre played a critical role in heralding the advent of Minimalism. Characterised by austere lines and grids superimposed upon grounds of muted colour, Martin’s paintings elegantly negotiate the confines of structure, space, draftsmanship, and the metaphysical.

Carmen Herrera is an American-Cuban Minimalist artist working in both sculpture and painting. Having achieved success late in life—she sold her first piece at the age of 89—she is today considered a major figure in geometric abstraction. “My quest is for the simplest of pictorial resolutions,” she has declared, and her work is characterised by its radically reductive use of forms, reminiscent of Ellsworth Kelly or Josef Albers. Among her most iconic series are the Blanco y Verde (1959–1971) paintings, striking white-and-green compositions that confront both the physicality of painting and its relationship to its surroundings. A master of crisp lines and contrasting chromatic planes, Herrera creates symmetry, asymmetry and an infinite variety of movement, rhythm and spatial tension across the canvas with the most unobtrusive application of paint.

Since the late 1970s, Roni Horn has produced drawings, photography, sculpture and installations, as well as works involving words and writing. Horn’s work, which has an emotional and psychological dimension, can be seen an engagement with post-Minimalist forms as containers for affective perception. She talks about her work being 'moody' and ‘site-dependent’. Her attention to the specific qualities of certain materials spans all mediums, from the textured pigment drawings, to the use of solid gold or cast glass, and rubber. Nature and humankind, the weather, literature and poetry are central to her art.

Adopting the visual languages of science and Minimalism, Ann Veronica Janssens’s work suggests that all perception is fragile at best. Creating installations, projections, immersive environments, urban interventions, and sculptures, Janssens explores the sensory experience of reality. Space, distribution of light, radiant colour, and translucent or reflective surfaces all serve to reveal the instability of our perception of time and space. She explores properties of matter: gloss, lightness, transparency, fluidity) and physical phenomena: reflection, refraction, perspective, balance, waves in order to destabilise ideas about materiality.