Artists We Love For The Outdoors 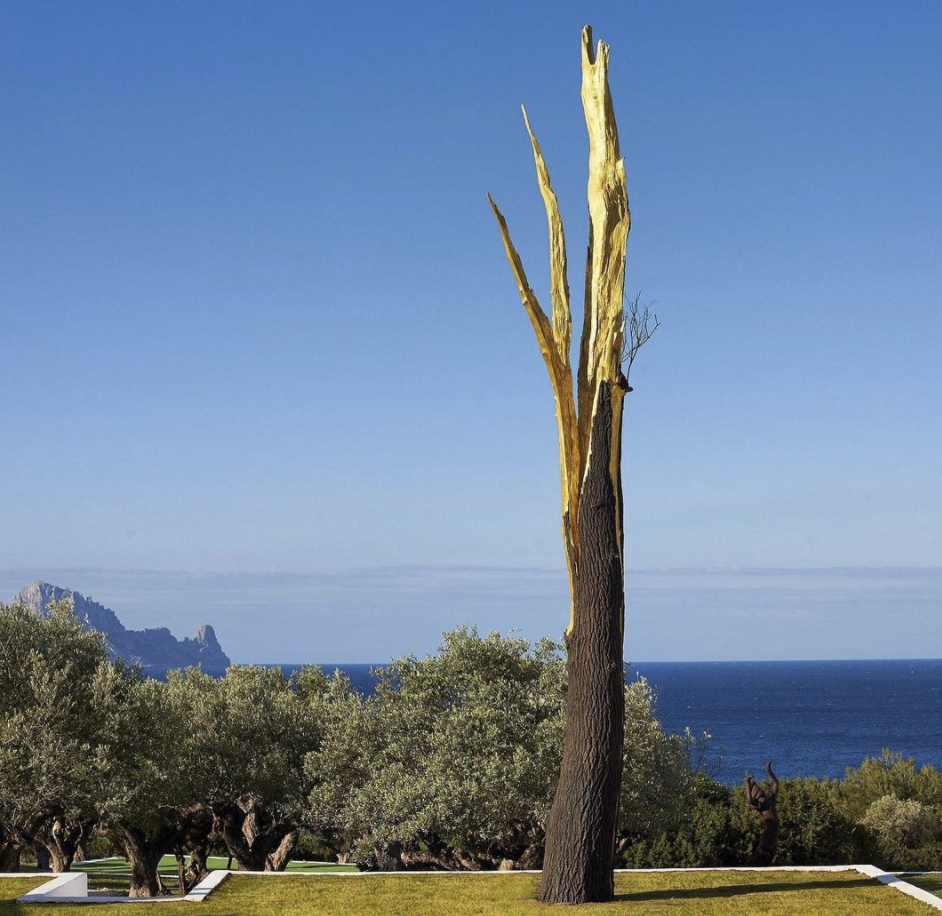 Alicja Kwade’s work investigates and questions the structures of our reality and society and reflects on the perception of time in our everyday life. Her diverse practice is based around concepts of space, time, science and philosophy, takes shape in sculptural objects, video and even photography. Her work was exhibited in multiple solo shows in museums and institutions such as the Langen Foundation, Neuss or the YUZ Museum, Shanghai. In 2019, she was commissioned to create a site-specific monumental installation for The Met’s Roof Garden in New York. She has also taken part in international events all around the world such as Desert X, Coachella in 2021; or the 57th Venice Biennale in 2017.

B. 1974 in Copenhagen, Denmark. Lives and works between Berlin and Copenhagen.

Jeppe Hein is a contemporary Danish artist whose interactive works combine different elements of architecture and art for the viewer to confront. By employing materials such as mirrors, balloons, and benches, Hein invites spectators to activate the exhibition space. “I want to show that the work isn’t anything on its own, it is only what the public informs it with. The viewer’s role brings the piece to the centre of attention,” he has explained.

“I want to show that the work isn’t anything on its own, it is only what the public informs it with. The viewer’s role brings the piece to the centre of attention,” -Jeppe Hein.

Hein’s sense of playfulness towards the history of both Minimalist sculpture and Conceptual Art can be seen in his use of mazes and movable sculptures, which balance humour with structure. Today, his works are held in the collections of the Centre Georges Pompidou in Paris, the Museum of Contemporary Art in Los Angeles, and the Tate Gallery in London, among others.

Encompassing sculpture, tapestry, painting and drawing, Morris’s intuitive use of line weaves between abstraction and representation. Morris’s most recognisable body of work is her ‘Stack’ series, begun in 2014 and inspired by the artist’s grief following a stillbirth.

The sculptures, which are comprised of irregular spheres precariously arranged into tall columns, evoke the swell of pregnancy. Sculpted in plaster or cast in bronze, the forms are painted with hand-sourced, raw pigments in vivid hues such as Ultramarine, Viridian and Ochre, which give Morris's lumpen orbs a rich, vibrant hue. Morris uses the same deep pigments in her drawing and tapestry practice, which combines personal ciphers with abstract mark-making and grid-like structures.

‍
Over the course of his career, Erwin Wurm has radically expanded conceptions of sculpture, space and the human form. His sculptures straddle abstraction and representation, presenting familiar objects in a surprising and inventive way that prompts viewers to consider them in a new light. He often explores mundane, everyday decisions as well as existential questions in his works, focusing on the objects that help us cope with daily life and through which we ultimately define ourselves. These include the material objects that surround us – the clothes we wear, the cars we drive, the food we eat and the homes we live in.

Takuro Kuwata is a contemporary Japanese potter known for his revolutionary style. His work is a contemporary take on “Wabi-sabi,” a traditional Japanese aesthetic theory that centers transience and imperfection as necessary elements of beauty. In his practice, Kuwata seeks to update Wabi-sabi as he creates clay objects that break many rules of the medium all the while allowing an element of chance to play a major part in the final result. Often, Kuwata’s characteristic surfaces are coated with an extremely thick glaze that explodes when baked in the kiln. Kuwata also employs several other experimental techniques, such as adding stones to his clay mix which burst and puncture the outer layer when fired and, in other works, applying needles to catch the glaze on his pieces as it melts over the surface.

His work has been shown extensively in Japan, including the exhibition Japanese Kogei | Future Forward at the 21st Century, at the Museum of Contemporary Art in Kanazawa, which traveled to the Museum of Art and Design in New York in October  2015. He has had numerous solo shows all over the world as well as participating in group exhibitions at Cherry and Martin in Los Angeles, Rhona Hoffman Gallery in Chicago and Salon 94 in New York. Kuwata currently lives and works in Toki City, Gifu, Japan.

The veins of water that pour from the earth flow in trickles that merge, like the branches in the trunk, like the fingers in the palm of a hand, like the bronze in the matrix of a tree. —Giuseppe Penone

Throughout his fifty-year career, Giuseppe Penone has employed a wide range of materials and forms in an exploration of the fundamental language of sculpture. A protagonist of Arte Povera, Penone explores respiration, growth, and aging—among other involuntary processes—to create an expansive body of work including sculpture, performance, works on paper, and photography.

In 1969 Penone created the first of his Alberi (Trees): “stripped” trees made by carving into mature timbers and removing the wood along the outer growth rings to reveal the memory of a sapling at the core of the trunk. This ongoing series has taken on various permutations as Penone refines his techniques and experiments with different sizes and installations. In 1970 he even carved an Albero in the presence of an audience, merging sculpture and performance. This same year he made the Rovesciare i propri occhi (Reversing One’s Eyes) works, in which he wore custom-made mirrored contact lenses and had himself photographed. The lenses, though they deprived the artist of his own gaze, allowed him to objectively record images, literally reflecting his surroundings.

Carol Bove is a contemporary American conceptual artist. Working in a multimedia practice, she creates installations of archival objects gathered from personal experience, literature, art history, and nature. Bove describes herself as an anthropologist carefully categorizing intellectual works and popular culture that have had a lasting effect on contemporary life, including texts such as The Feminine Mystique and Playboy magazine. The unexpected layering of these juxtapositions creates poetic and subtle new relationships between otherwise familiar objects. Born in 1971 in Geneva, Switzerland, Bove grew up in Berkeley, CA before earning a degree from New York University in 2000. Her relational works regularly employ connections to trends and movements in the cultural and societal spheres, connecting aesthetic form and content with broader statistical and relationships. “I'm interested in making room for other people in my work,” she has said. Bove's work has been met with widespread critical acclaim, exhibited at institutions like The Museum of Modern Art, Palais de Tokyo in Paris, Kunsthalle Zürich, and the Institute of Contemporary Art Boston.

Jean-Marie Appriou develops a reflection on sculpture by exploring materials such as aluminium, glass, bronze and clay in unconventional processes. From his experiments of an alchemical nature emerge human, animal and plant figures which meet and complement each other, giving rise to different scenarios. This fantastic and marvellous universe draws on a variety of inspirations, from Egyptian mythology to Pre-Raphaelite painting, from science fiction literature to cinema and comics. His work has been exhibited at the Consortium Museum in Dijon, Central Park in New York at the invitation of the Public Art Fund, the Lyon Biennial, the Fondation Louis Vuitton, Paris, the Palais de Tokyo, Paris, the MAMVP, Paris, the Château de Versailles, the David Roberts Art Foundation, London, the Astrup Fearnley Museet, Oslo, the Vienna Biennial, as well as in the galleries of Jan Kaps, Cologne, Simon Lee, New York, and Eva Presenhuber, Zurich; C L E A R I N G, New York and Brussels.

B. 1983. Lives and works in Berlin and Switzerland.

Claudia Comte is a Swiss contemporary artist known for her use of natural materials set against abstract backgrounds in her mixed media installations and her interest in ecological conservation. Her works explore the lifecycle of natural materials, juxtaposing wooden sculptures against graphic wall paintings. For each piece, she uses her unique measurement system so that every artwork relates to one another. “For me, the work is about bringing people together...allowing us to see and engage with an art installation that embraces all of the senses,” she says.

“For me, the work is about bringing people together...allowing us to see and engage with an art installation that embraces all of the senses,” -Claudia Comte

In 2013, her work was included in a group show at Gladstone Gallery in New York, leading to a solo show later that year at Gladstone Gallery in Brussels. Her career grew from there, leading to exhibitions across the world, including König Galerie in Berlin, Art Basel, and moCa in Cleveland, Ohio. In 2019, she collaborated with the Alligator Head Foundation in Portland, Jamaica to create “The Cacti Series,” a collection of concrete sculptures placed underwater at the East Portland Fish Sanctuary in Jamaica as part of a larger project to help inspire people to learn more about conservation and climate change, protect marine life, and ultimately revive the local coral reef.

Ugo Rondinone is a Swiss contemporary artist working in mixed-media installations that include sculpture, painting, video, sound, and photography. His wide-ranging practice utilizes metaphoric and iconographic images such as clouds, animals, and figures, as well as powerful declarative sayings like “Hell, Yes!” By co-opting the language of psychedelia and advertising, Rondinone conveys his profound interest in the contemplation of everyday life and activities. “I see art-making as a ritual, a meditation for myself,” the artist explains. “It’s to exclude myself from society and to create my own rites…The energy of art is that you can spend time with yourself.” Born in 1964 in Brunne, Switzerland, he went on to study at the Hochschule für Angewandte Kunste in Vienna and moved to New York in 1998. He has represented his home country in the 2007 Venice Biennale, and his work can be found in the permanent collection of the New Museum of Contemporary Art in New York.

Lived and worked in Vienna.

From abstract and interactive sculpture to furniture and collage, Franz West’s oeuvre possesses a character that is at once lighthearted and deeply philosophical. Belonging to a generation of artists exposed to the Actionist and Performance Art of the 1960s and 70s, West instinctively rejected the idea of a passive relationship between artwork and viewer. Opposed to the existential intensity requisite to his performative forebears (such as Actionism), he produced work that was vigorous and imposing yet unbounded and buoyant. In 1973, he began creating compact, portable, mixed media sculptures called Passstücke (Adaptives). These “ergonomically inclined” objects were actualised as artworks only when touched, held, worn, carried, or otherwise physically or cognitively engaged. Transposing the concepts engendered by these formative works, he explored sculpture increasingly through the framework of the ongoing dialogue between viewers and objects, while probing the internal aesthetic relations between sculpture and painting. Manipulating everyday materials and imagery in order to examine art’s relation to social experience, West revolutionised the interplay of concealment and exposure, action and reaction, both in and outside the gallery.