NICOLAS PARTY THROUGH THE LOOKING-GLASS 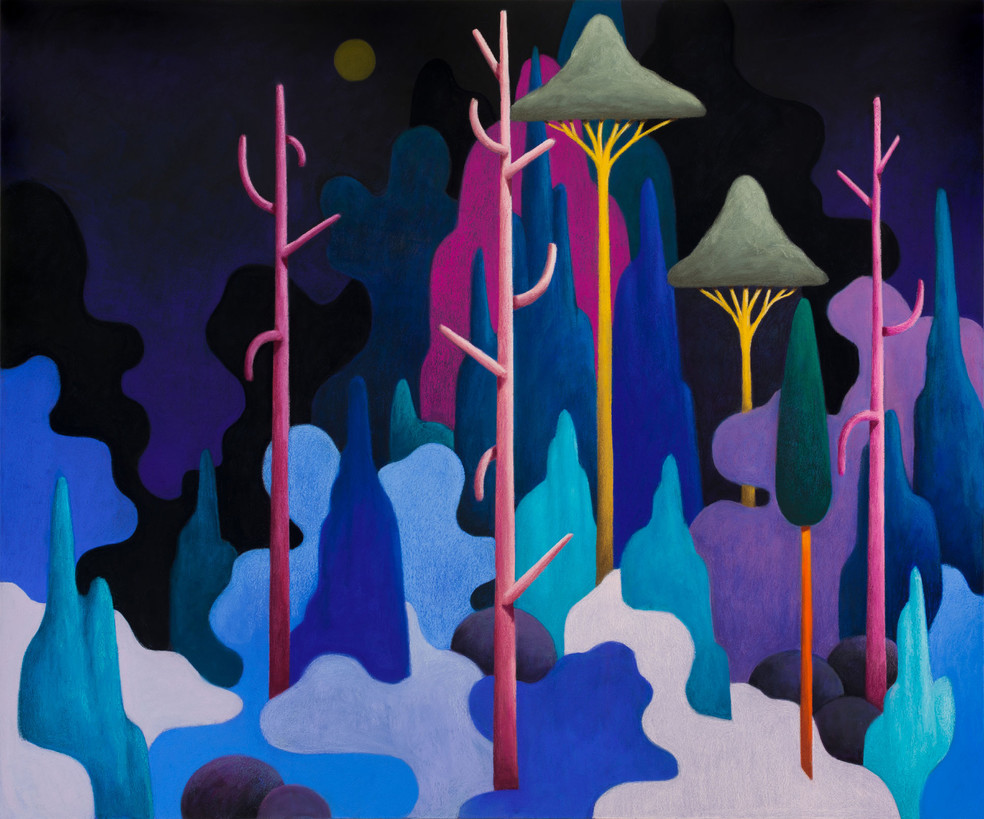 Nicolas Party is our white rabbit, and we eagerly follow him down the rabbit hole of the surreal, into a world familiar yet tantalizingly colourful, fantastical, and strange. A world where trees shimmy to unheard music, the sun burns blue over a golden sea, and the barrette in your hair might suddenly become a butterfly. Party has just turned 40 years old, and in recent years has hit the scene in a major way. This was not unexpected however, as some of his earliest works are iconic pieces in his oeuvre. His signature style and championing of his pastel medium have secured his place in the contemporary art landscape. Crisp lines, saturated colours, and velvety finishes make his work a sensual experience and a pleasure to look at. The Swiss artist can place himself firmly in his native country’s extensive history of landscape painting, with an unbelievably fresh twist; Party grew up as a street artist and traveled Europe decorating anything and everything he could in colour and lines. His work holds the energy of an artist at play and demonstrates a perceived beauty of all things. He removes all extraneous signifiers of the subjects of his work and lets the viewer collaborate in the imaginative questions he poses: what if trees were the soft and pale colours of Easter eggs, and what if we were comfortable enough with animals to wear a snake as a shawl? His works are filled with a buzzing vibrancy, though flattened in depth of field. We see an artist who successfully found away to harness the fearless attitude of on-the-run spray can painting in the streets laid flat on a canvas.

Party is the champion of pastels yet doesn’t limit himself by medium. Since his art school days, Party has courted many mediums, including sculpture, installations, painting and performance art. In 2011, he received his first major attention with a performative event he staged at Glasgow’s Modern Institute. For Dinner for 24 Elephants, 2011, Party invited two dozen guests, an eclectic mix of art world professionals, to a dinner party at a gallery for which he designed every piece, including the plates, the furniture, and the food. He and the gallery directors acted as waiters and served the guests for a four-hour meal. Most notably, the guests were sat on stools painted to appear as if they were riding elephants.

When at a Party exhibition there is always more to see than the works themselves. Party’s “architectural interventions” are part of his curatorial magic and create a comprehensive detachment from reality to surround the otherworldly content of the works. His most recent exhibition at Hauser & Wirth in Los Angeles, his first solo exhibition with the gallery and a show that launched with the second edition of Frieze LA, is a firm example of this magic. The walls of each room were completely saturated with red, blue, teal, and pink, separated by de Chirico-esque narrow rounded archways. Moving through the narrow space from one room to the other created an experience of traveling through worlds. Upon entering the gallery, the viewer is immediately confronted with options of these archways, and immediately seized by the surreal disorientation of the space, this is no white cube.  In the middle of the exhibition space stands the Sottobosco Chapel, 2019, a chapel-like structure that appears to be made of marbles and exotic wood, but is in fact wood panels masterfully painted in the Trompe l’oeil technique, a technique used in the Renaissance to create realistic optical illusions of other materials, such as marble.

Inside Sottobosco Chapel, 2019, is Three Snakes, Lizard, and Toad, 1663 by Otto Marseus van Schrieck, the Dutch artist who made the sottobosco still life famous. Sottobosco means “undergrowth” or “underbrush”, and the sottobosco still life emerged with the scientific developments of the 17th-century Dutch Golden Age, when the invention of the microscope ignited a fascination with all things miniscule. Marseus directed the viewers gaze away from the domestic scenes of art at the time, and downward, toward the dense universe of a forest floor, teeming with life. The microscope allowed detailed viewing of these minuscule flora and fauna and rendering their depictions enlarged, alive and relatable. The inclusion of works my Marseus clues us into Party’s influence and makes his contemporality of the concept even more striking. This historical context reignites the revelation of seeing these tiny life forms as a rare and wonderous event.

The main gallery space comprises the right side of the building and holds three rooms separated by narrow archways. This space is bookended by enormous mirroring wall murals, one in hues of red and one in blue, of a scene reminiscent of grotto whose pillars of melting morphic rocks open up to a sea and an overexposed horizon. Hauser and Wirth is a gallery notorious for exhibiting work that is sold far before the exhibition opening, and this curatorial detail of Party’s is special. These wall murals are artworks made for those visiting the space itself, an inclusive ephemeral experience made just for viewers, most of which who are not in the blue-chip gallery purchasing game. It’s very street artist of him.

The first and last rooms of the main gallery hold portraits, on walls of deep sapphire. Party’s portrait subjects are stoic and glamourous. Their faces are poised, and their hair pristinely coiffed in smooth updos. They are fantastically dressed, in elements of nature. In Portrait with Roses, 2019 a woman is gowned in blooming pink roses. In Portrait with Mushrooms, 2019 large assembled mushrooms conceal a woman’s teal skin from the chest down. Portrait with Snakes, 2019 show a proud woman facing the viewer head on with a snake coiled loosely around her, draped as if a shawl, and a singular moth adorning her hair. Two giant frogs shape the coat of a man in Portrait with Frogs, 2019 with a lone butterfly fluttering near his blue skinned face and unbothered expression. The viewer moves through an archway and the walls of the middle room are painted in cameo pink. This room holds Landscape, 2019 an assemblage of tall skinny trees, with trunks of blues, reds, and orange with bushy canopies of canary yellow. Across from Landscape, 2019 is Sunset, 2019 a moody depiction of a yellow sun lowering towards a lagoon-esque sea of deep greens and teals. This work is complementary to Sunset, 2020 which depicts a robin egg blue sun setting over a liquid gold sea with shades of deep red and orange.

In the upstairs space of the gallery we are introduced to Party’s sculptures. They are four chest high yellow busts, with delicate lips and features of a lady. Each bust, in place of hair, wears a cap of Party’s flora and fauna: mushrooms, roses, frogs, and a snake. They appear as if the enlarged pawns of a chessboard, stout and stoic. The viewer is welcome to walk around the busts and admire them closely, another possible iteration of the modern ability of viewers to get up close and personal with microscopic organisms in the world of nature. The last room holds a subject unlike any of the previous. The walls of this room are of deep burgundy and matte black, and the contents of the works depict macroscopic views of folds pinky grey flesh spotted with flies. All four works of this series are titled Creases 2019-2020 and take his approach of a macroscopic view of the familiar to what is most familiar to all, the human body. Some works in the series depict the flesh with large unnatural bumps and may also refer to Party’s theme of the uncanny and the surreal.

Party’s latest exhibition for Hauser and Wirth is “Canopy” a show of works in the medium of watercolours. The show is currently on view as an exclusively online exhibition and opened May 8th. The works are landscapes exclusively of trees in his signature palette of unexpected colours. This collection is prominently in muted jewel tones, with the occasional pop of a neon pink. On the subject of trees Party states:

“One of the first things you draw as a child are trees… trees are natures alphabets. The infinite flexibility of the visual language of the tree makes its execution endlessly playful”. - Nicolas Party

From the forest floor to the treetops, Party continues to surprise us with familiar scenes through a vibrant new lens. We put on his kaleidoscope eyes and the world is a wonderland. Party’s work is a celebration of nature, and the beauty of rediscovering the tiny and large familiarities of the natural world and revolutionizing them in the modernity of colour. Party’s world is a wonderland, and one where even a moth or a mushroom becomes radiant and remarkable.