A LOOK INSIDE ONE OF THE MOST IMPRESSIVE NFT ART COLLECTIONS 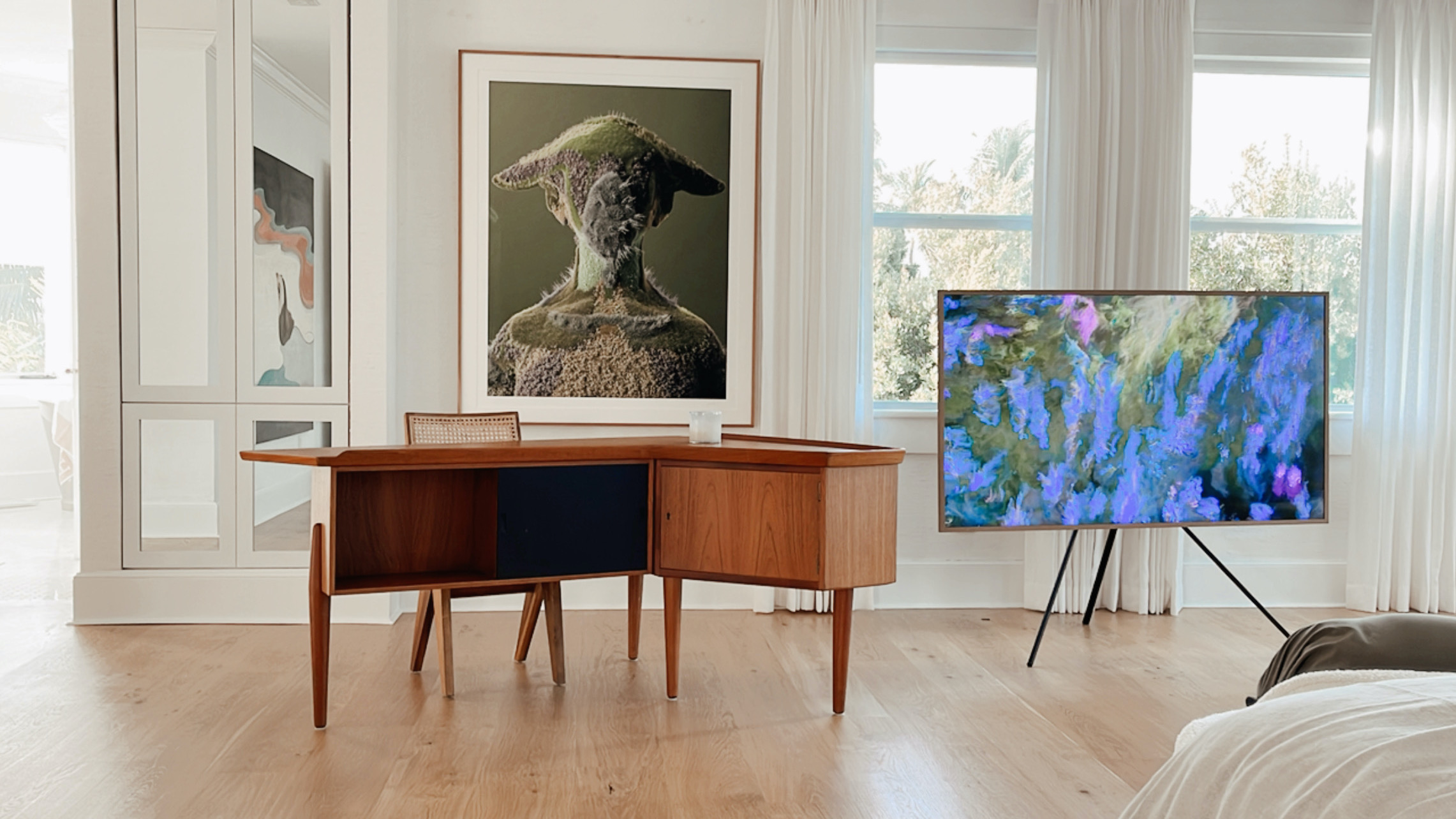 Included in Apollo's 40 under 40 in 2021, Pablo Rodriguez-Fraile has become one of the biggest names in the NFT art world. Considered one of the most influential collectors of NFTs alongside his architect and interior designer wife, Desiree Casoni, their collection boasts more than 500 NFTs, including household names such as Beeple, Pak, Refik Anadol and Andres Reisinger. Last December, I was fortunate to visit their wonderful home in Key Biscayne in Miami, where I discovered how this power couple has made an effort to find unique, innovative and tasteful ways to showcase their unparalleled NFT collection. More recently, we sat down together via Zoom to discuss their collecting habits, how to showcase digital art, and the future of NFTs.

From speaking with Pablo and Desiree, you get a sense of real synergy. His passion for NFTs comes from a professional background in maths, economics and crypto while hers is rooted in her creative career. Having grown up surrounded by art, she followed her mother’s footsteps to pursue architecture and design. The college sweethearts (“not many of those left!” Pablo jokes as he tells the story) had met during their studies at Columbia University in New York.

It was Pablo’s work in the blockchain space and his keen interest in the future of this technology that led him to the discovery of NFTs. “I was lucky enough to be drawn to the NFT ecosystem very early on. Back then it was literally made up of two buyers, me and somebody else.” It was then that the couple found common ground and realised they had real potential to create something special together. “We understood the implications of this technology in the long term, so we decided to get very active.” When it comes to collecting NFTs, Pablo and Desiree bring the best of their worlds into the mix.

“I was lucky enough to be drawn to the NFT ecosystem very early on. Back then it was literally made up of two buyers, me and somebody else.” - Pablo Rodriguez-Fraile

When I ask Pablo how he would define an NFT artwork, and whether it was safe to assume that when we discuss NFT art we are actually referring to digital art, his response is clear: for him what he collects is simply ‘art’. “Saying NFTs when referring to art is confusing and a mistake, in my opinion,” he explains. “Using the word ‘NFT’ is synonymous to the word ‘asset’. It is very important that we start differentiating between the array of asset classes that exist under the wide umbrella of NFT technology. In the world of NFTs there’s art, of course, but there’s also collectibles, there’s gaming, there’s land, financial applications, and the list goes on to things we have not even begun to imagine. I think that it is very important to distinguish what is actually art in all of this.”

"In the world of NFTs there’s art, of course, but there’s also collectibles, there’s gaming, there’s land, financial applications, and the list goes on to things we have not even begun to imagine. I think that it is very important to distinguish what is actually art in all of this."- Pablo Rodriguez-Fraile.

Pablo believes there are some key differences between the ‘traditional’ art world and the NFT world. One of them lies in the interaction between the collector and artist. “Artists in this new movement are living artists, they are often young, and most of them are extraordinarily active with their communities and audience.” He believes that though a direct dialogue between artist and collector may exist with other art forms, it is not as common and as strong as the NFT space. Another difference is a lack of support system, such as gallery representation. For Pablo this is detrimental to both the artist and the potential collector. “In general, this means that, as a collector, you really need to do your due diligence to find the right artists and the right projects and you need to be blockchain technical. This is the unfortunate current state of the industry but it will evolve over time.”

From the start, Pablo and Desiree were able to foster strong relationships with the artists who were already active in the space. “The artists were really good at putting things on the blockchain, but lagging behind in everything else,” Pablo explains, referring to all the elements necessary to sustain a creative career. So the couple began offering free advice to support the artists they were passionate about. “We helped the artists with everything. From pricing, structuring, introductions to collectors, even PR and communications. Sometimes with personal things like accounting, fiscal recommendations, even some family matters! Many of these artists are now close friends. We travel together and they stay at home when they come to Miami.” He concludes that this closeness and trust derives from the fact that the couple never wanted to take a cent from the artists. They were always driven by a passion for the art and the space.

The result? “We were able to build what is now considered the most important collection of tokenised digital art in the world. We have an extensive collection including many of the top digital artists in the space, and in many cases, their most iconic works.”

Desiree describes their collection as an extension of their personalities. Pablo’s “structured, mathematical and strategic” mindset and her “passion for aesthetics and art and everything that is visual” come together clearly in the choice of artists. “You can see it very clearly in our collection because we love to work with artists who are very precise, very in tune with their craft, and who are not just making beautiful pieces for the sake of it but because there is an intent behind them.” Later in the conversation she adds, “the magnet that leads us to an artist usually is in how they are using the blockchain, how they are pushing boundaries with this new technology.”

“It is so exciting to see the new possibilities that are offered with VR, or by installing videos in a way that they become a source of illumination for a space. I am starting to incorporate these aspects into my interiors." -Desirée Casoni.

Finding ways to showcase digital art is a source of great excitement for Desiree and she has been using her house as a place for experimentation. “It is so exciting to see the new possibilities that are offered with VR, or by installing videos in a way that they become a source of illumination for a space. I am starting to incorporate these aspects into my interiors. It is so fun because I am no longer dealing with art as a static piece on a wall; I am working with installations. For example, Andres Reisinger’s works are composed of a piece of furniture that goes with a digital landscape. To showcase them, I need to consider how to place the furniture alongside the digital to create a dialogue.” The hardware available today, however, is not yet fully compatible with this new art movement. “Especially with artworks that are connected in real-time to the blockchain,” she explains. “The screens or frames that exist today are unable to connect directly to the blockchain, so the artwork does not evolve as it is meant to and needs to be manually updated.”

When asked about their collecting habits, Pablo explains they “never purchase standalone work because there always needs to be some sort of long term engagement with the artist.” They consider themselves art patrons first and foremost and when they acquire an artwork their intention is to support the artist’s career. Thanks to the extensive groundwork they did at the beginning, discovering new artists and projects today happens quite organically for them. When I ask them for some names in the collection, Pablo lists the stars. Quayola, Beeple, Pak, Refik Anadol, Andres Reisinger. “Make no mistake,” he adds, “these artists did not just get ‘lucky’. They did not just appear out of nowhere. These artists come from decades of experience and the arrival of this technology simply allowed them to expand their practice and build strong communities. They are incredible artists, disciplined, thoughtful, and often very funny!”

“Make no mistake,” he adds, “these artists did not just get ‘lucky’. They did not just appear out of nowhere. These artists come from decades of experience and the arrival of this technology simply allowed them to expand their practice and build strong communities. They are incredible artists, disciplined, thoughtful, and often very funny!”- Pablo Rodriguez-Fraile.

Last December, Pablo launched Aorist, a next-generation cultural institution supporting artists creating at the edge of art and technology, with co-founders Ximena Caminos and Andrea Bonaceto, starting to tackle what he considers the three biggest problems in the space: poor user experience, a lack of curation, and the industry’s carbon footprint. “At Aorist, we are fully focused on the art. For us it is not about art as a commodity or a financial asset or a tool for speculation. Our vision is to realise incredible, digitally-native art experiences in the physical world.” He has built a strong team with key personalities from the contemporary art world to help him in this ambitious endeavour. “I always say that I should’ve listened to Pablo earlier!” Desiree tells me, with a laugh. “I spent a long time going against the current,'' Pablo adds. Pablo’s passion and persistence are finally paying off.

10 Artists Defining Portraiture in the Context of Contemporary Art