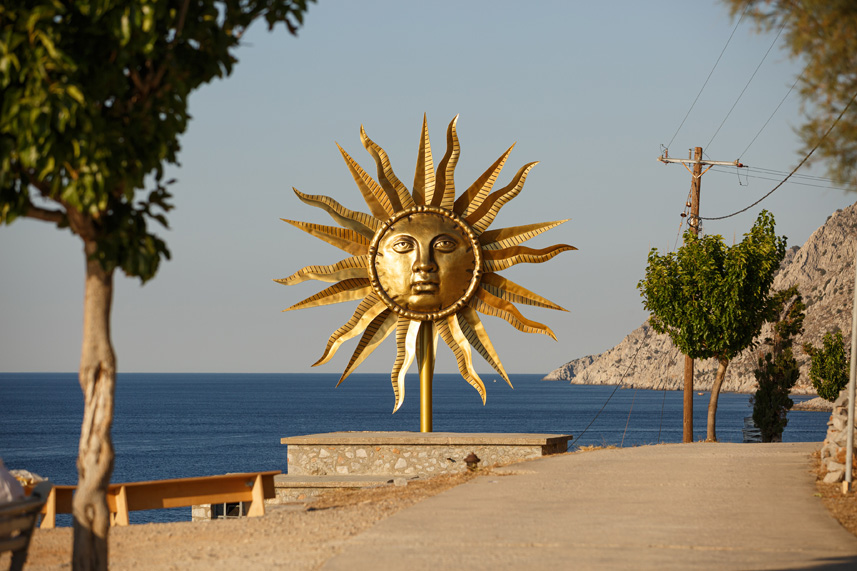 This Summer, a wealth of art filled destinations lands in our travel plans. On the shores of the Mediterranean sea, from Antibes to Arles, or Menorca to Hydra, some extraordinary art exhibitions give us yet more reasons to explore the European coastline rather than just its pristine beaches, clear waters and charming towns. Here is LVH Art Travel Guide for Summer 2022.

Château La Coste is a centuries old wine producer nestled in the heart of Provence. Part winery, restaurant, event space and bookshop, the company is constantly expanding to have included a Tadao Ando-designed cultural art center, along with its most recent building, which is said to have been one of the final designs drawn up by Oscar Niemeyer.

To accompany a range of exhibitions ongoing at Château La Coste, the latest pavillion is hosting a series of new work by British visual artist Annie Morris. Well-known for her spherical totemic sculptures, also known as Stacks, Morris’ vibrant assemblages serve as a metaphor for resilience and hope against the uncertainty that life throws at us.

Morris has said in the past that she first created this body of work as a way to cope with the tragic stillbirth of her first child back in 2014. The series has since developed into a joyous study to which has become a hallmark of her practice. Also on view are the artist’s lesser-known, but just as vibrant set of tapestry paintings. Co-curated by Georgina Cohen, Annie Morris is on view at Château La Coste until September 2022.

Jeff Koons at the Deste Foundation in Hydra

The DESTE Foundation Project Space Slaughterhouse presents this Summer Jeff Koons: Apollo, a solo exhibition, on view until October 31. The exhibition is an installation presenting new sculptures by Jeff Koons along with readymade objects selected by the artist to engage the viewer in a metaphysical dialogue between the contemporary and ancient. The show marks over twenty years since Jeff Koons’s last solo exhibition in Greece. At the center of the installation, within the Slaughterhouse, is the sculpture Apollo Kithara. The Apollo is playing a kithara, which is considered the origin of today’s guitar. The polychromed animatronic sculpture stands over 2.3 meters tall. The walls within the Slaughterhouse have been transformed by using as the base the ancient frescoes from Boscoreale, near Pompeii.

The exhibition includes several other new works including a pair of bronze Nike sneakers, Gazing Ball Tripod, and Plato's Solid Forms Wind Spinners. There are other elements that are corresponding to this installation, ranging from burning candles to a Duchampian reference of a urinal. Above the Slaughterhouse is Apollo Wind Spinner, a 9.1 meter (30-foot) wide reflective wind spinner that greets people entering the port of Hydra on one side and, on the other, welcomes people walking to the building housing the installation. The face of the wind spinner is that of Apollo. The exhibition activates the senses through music, sage burning, and baked offerings reminiscent of ancient times. With the sounds of the ancient kithara playing alongside contemporary songs, the two musical formats are at times disjointed and at other moments find sublime beauty. The overall exhibition is metaphysical and celebrates human history and aspiration.

Illa del Rei, a beautiful island in Mahon harbor, is home to Hauser & Wirth Menorca where this Summer, Rashid Johnson's show Sodade marks the artist's first solo exhibition in Spain, where he continues to work with a complex range of iconographies to explore collective and historical expressions of longing and displacement, while speaking to the times we live in.

‘Sodade’ is the title of a Cape Verdean song from 1950s, popularized by Cesária Évora, that narrates a profound emotional state of longing on ‘the long way’ to São Tomé. Originating in the Portuguese ‘saudade,’ the term signifies a feeling of melancholy and missing, and becomes hybridized in the Cape Verdean use with a shift in the spelling. In ‘Sodade,’ Johnson continues to draw from critical history and narratives around migration and journeys, with a similar gesture of hybridization.

The exhibition presents a newly developed series of bronze sculptures and Seascape paintings, alongside Bruise Paintings and Surrender Paintings, the latter of which is the latest offering to evolve from the iconography of his long-established Anxious Men series. The works are accompanied by the Education Lab, which provides a creative learning programme for diverse audiences throughout the duration of the exhibition.

Besides the Luma Art Foundation, which opened last Summer driving visitors to this charming region in the South of France, minimalist Korean artist Lee Ufan opened this May his own art center in Arles—his third after solo spaces in Japan and Korea. The new location is in a 17th-century mansion in the city’s historic quarter, converted by the artist's friend and architect of choice, Tadao Ando.

The mansion will house a permanent collection of Lee’s work, with ten sculptures from his series “Relatum” installed across the ground floor, where there is also a library and shop. Some 30 paintings hang on the second floor and three site-specific installations at the lower level are open to visitors by appointment only. There are temporary exhibition spaces for other artists on the third floor.

Arles has long been a region that has inspired artists, among them Van Gogh and Gauguin. Lee’s own interest in the area stems from its ancient past. Towards the end of 2021, the artist staged “Requiem”, a special exhibition celebrating the 40 years since Arles was named a UNESCO World Heritage site. Inspired by the picturesque ruins of Alyscamps, a large Roman necropolis, he presented 13 new works in conversation with the surviving sarcophagi. And in the new art center, visitors will be able to see a ancient portrait bust believed to be of the Roman emperor Antoninus Pius, which was discovered in a wall during the building’s restoration

Anselm Kiefer’s vast studio complex in Barjac in southern France, which has been likened to a “human ant hill”, has finally opened to the public this Summer after years of planning. Visitor numbers to the site, known as La Ribaute, will be capped. “The objective of the Eschaton-Anselm Kiefer Foundation, which runs La Ribaute, is to ensure access to the public—rather than mass tourism—over the years to come,” says Janne Sirén, the president of the foundation’s board of trustees. “There is a lot of walking involved in visiting La Ribaute; it’s over 40 hectares,” he says. In 1992, having left Germany, Kiefer acquired La Ribaute, an old silk factory in Barjac. The site developed organically, comprising buildings, outdoor art installations, subterranean chambers and a five-level concrete amphitheatre. The artist lived at the 40-hectare site, 70km north-west of Avignon, until 2007, after which he relocated to a new studio space at Croissy on the outskirts of Paris.

“There are several art installations in the landscape interconnected by paths as well as underground tunnels that the artist has designed,” says Sirén. “Barjac has continued to be a secondary studio, especially in the summer season. You might compare the foundation in concept to Marfa [the small city in Texas that has become an arts hub]; it’s an artist space now owned by a foundation, the purpose of which is to preserve it for posterity.” La Ribaute has grown, with more than 60 buildings and art areas, known as pavilions. “Mr Kiefer added his own touch with these art spaces; some of them have sculptures, some have paintings,” Sirén says. “In recent years, he has welcomed artists he feels kinship with to contribute permanent installations to the ecosystem of La Ribaute, starting with Wolfgang Laib in 2014. Monica Bonvicini, the latest contributor, will unveil her work in July.” Laurie Anderson and Valie Export have also provided works.