SYMPTOM AND CURE: THE ART AND TRAUMA OF YAYOI KUSAMA AND LOUISE BOURGEOIS 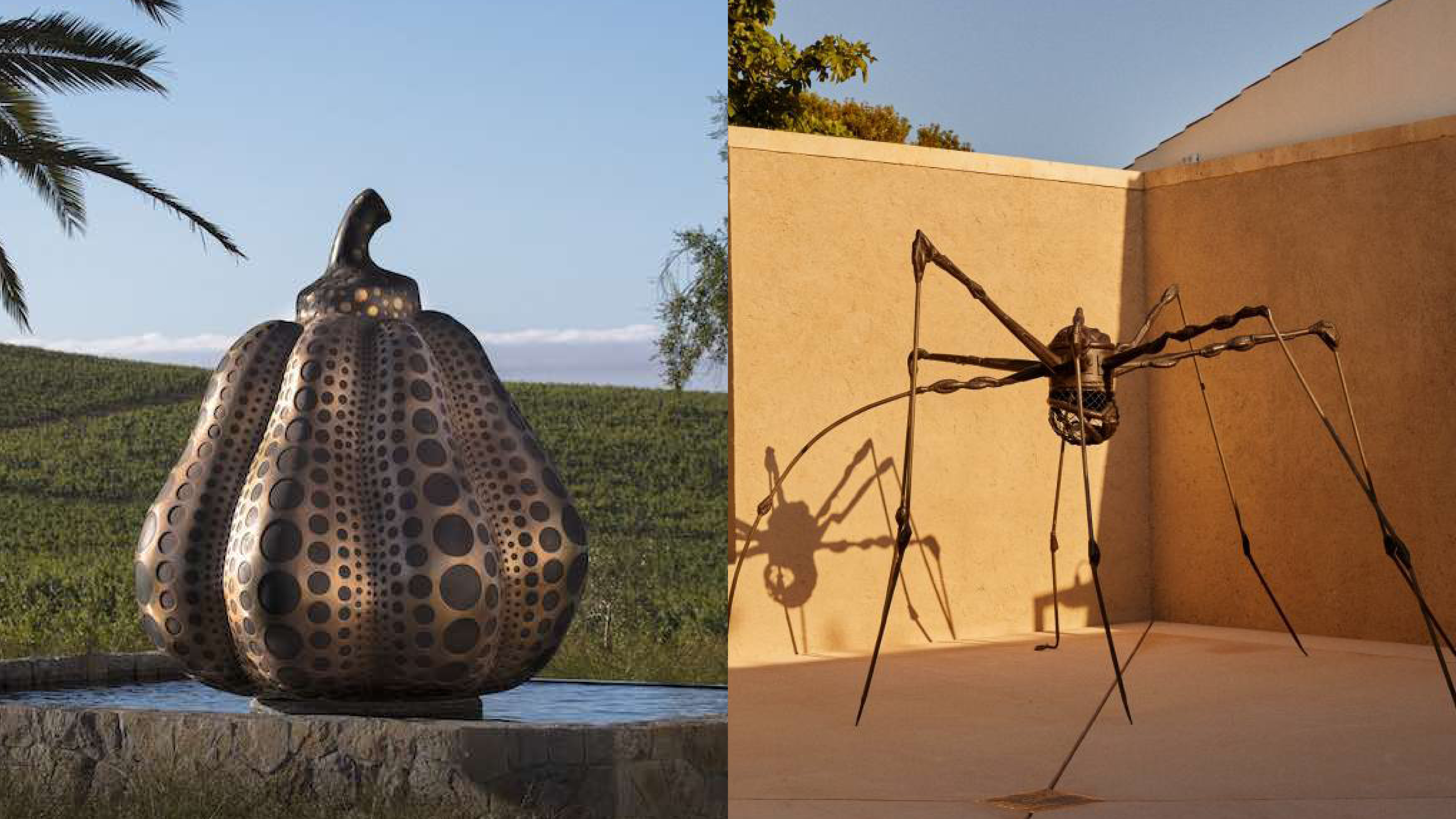 Many of art history’s great female artists have battled psychological traumas throughout their careers. From Frida Kahlo to Aloïse Corbaz, history has taught us that, despite the pain, hardships provide a great source of inspiration. However, many of these grand dames of contemporary art began producing art at a time when mental health issues were far more stigmatised than they are today.

This makes for an interesting case study on the work of both Louise Bourgeois (1911-) and Yayoi Kusama (born 1929), making their practice all the more inspiring. Both now revered as central figures of 20th century art, Kusama and Bourgeois shared a profound interest in psychoanalysis, using personal trauma as their main source of inspiration, and conversely, using their art making practice as a way to heal from it. Foreign-born, burdened by childhood trauma and given to intense psychological states, both artists found some measure of relief in New York City, where they achieved recognition as major artistic figures. For these exceptional women, making art was always the way to salvation.

Throughout her career, the Paris-born Bourgeois created art that dealt with the emotions resulting from the discovery of her domineering father’s affair with her live-in tutor. Known for her autobiographical, brutally honest sculptures and paintings, she titled one of her pieces Art is a guaranty of sanity and once said, "art is restoration… the idea is to repair the damages that are inflicted in life."

Kusama – born to a prosperous family in Matsumoto, Japan – had a difficult upbringing. Her mother’s contempt of a weak husband (who was prone to long absences and serial womanising) and her vehement and violent opposition to Kusama’s wish to become an artist exacerbated her nascent hallucinosis: a psychological condition that would become the lifelong well-spring for her obsessive-compulsive work. "By continuously producing the forms of things that terrify me, I am able to suppress my fear… I'm able to revel in my illness in the dazzling light of day."

Born in France in 1911, and working in America from 1938 until her death in 2010, Louise Bourgeois is recognized as one of the most important and influential artists of the twentieth century. For over seven decades, Bourgeois’s creative process was fueled by an introspective reality, often rooted in cathartic re-visitations of early childhood trauma and frank examinations of female sexuality. Articulated by recurrent motifs (including body parts, houses and spiders), personal symbolism and psychological release, the conceptual and stylistic complexity of Bourgeois’s oeuvre – employing a variety of genres, media and materials – plays upon the powers of association, memory, fantasy, and fear.

Bourgeois’s work is inextricably entwined with her life and experiences: fathoming the depths of emotion and psychology across two- and three-dimensional planes of expression. ‘Art,’ as she once remarked in an interview, ‘is the experience, the re-experience of a trauma.’ Arising from distinct and highly individualized processes of conceptualization, Bourgeois’s multiplicity of forms and materials enact a perpetual play: at once embedding and conjuring emotions, only to dispel and disperse their psychological grasp. Employing motifs, dramatic colors, dense skeins of thread, and vast variety of media, Bourgeois’s distinctive symbolic code enmeshes the complexities of the human experience and individual introspection.

Rather than pursuing formalist concerns for their own sake, Bourgeois endeavored to find the most appropriate means of expressing her ideas and emotions, combining a wide range of materials – variously, fabric, plaster, latex, marble and bronze – with an endless repertoire of found objects. Although her oeuvre traverses the realms of painting, drawing, printmaking, and performance, Bourgeois remains best known for her work in sculpture.

Bourgeois’s early works include her distinct ‘Personages’ from the late 1940s and early 1950s; a series of free-standing sculptures which reference the human figure and various urban structures, including skyscrapers. The ‘Personages’ served as physical surrogates for the friends and family Bourgeois had left behind in France, while also highlighting an interest in architecture dating back to her childhood. Her installation of these sculptures as clustered ‘environments’ in 1949 and 1950 foreshadowed the immersive encounters of installation art twenty years before the genre’s rise to prominence.

Over the course of her distinguished career, Yayoi Kusama has developed a practice, which, though it shares affiliations with Surrealism, Minimalism, Pop art, Eccentric Abstraction, the Zero and Nul movements, resists any singular classification. Born in Matsumoto City, Japan in 1929, she studied painting in Kyoto before moving to New York in the late 1950s, and by the mid-1960s had become well known in the avant-garde world for her provocative happenings and exhibitions. Since this time, Kusama's extraordinary artistic endeavours have spanned painting, drawing, collage, sculpture, performance, film, printmaking, installation and environmental art as well as literature, fashion (most notably in her 2012 collaboration with Louis Vuitton) and product design.

An enduring feature of Kusama’s unique art is the intricate lattice of paint that covers the surface of her Infinity Net canvases, the negative spaces between the individual loops of these all-over patterns emerging as delicate polka dots. These motifs have their roots in hallucinations from which she has suffered since childhood, in which the world appears to her to be covered with proliferating forms. Forging a path between abstract expressionism and minimalism, Kusama first showed her white Infinity Nets in New York in the late 1950s to critical acclaim. She continues to develop their possibilities in monochromatic works which are covered with undulating meshes that seem to fluctuate and dissolve as the viewer moves around them.

Another key motif is the pumpkin form, which has achieved an almost mythical status in Kusama’s art since the late 1940s. Coming from a family that made its living cultivating plant seeds, Kusama was familiar with the kabocha squash in the fields that surrounded her childhood home and the pumpkin continues to occupy a special place in her iconography. She has described her images of them as a form of self-portraiture.

From these to Accumulation sculptures, where everyday objects are made uncanny with a covering of soft-sculpture phallic forms or dried macaroni, to monumental outdoor sculptures and installations, such as Narcissus Garden, originating in 1966 when Kusama first participated in the Venice Biennale, and to the entrancing illusions of recent experiential mirrored room installations, Kusama’s work is far-reaching, expansive and immersive. Simultaneously infinitesimal and unlimited in scale, immeasurable yet intimate, it allows the viewer to enter into a fully realised world.

It is with characteristic dynamism that Kusama’s My Eternal Soul series, first began in 2009, has grown far in excess of the hundred works originally conceived by the artist. Distilled within the My Eternal Soul paintings are the themes and obsessions that characterise Kusama’s art, encapsulating a surreal and humorous, as well as instinctual approach to art making. Each new work of the ongoing series abounds with imagery including eyes, faces in profile and other more indeterminate forms recalling cell structures, often in pulsating combinations of colour. Some appear psychedelically primordial, other examples bring to mind ancient landscapes and grand geological patterns. This is Kusama, a pioneer in her command of a variety of media, at her most personal and direct, relying on brush, paint and canvas alone. They reveal an artist overflowing with ideas and undiminished in her desire to depict the apparently contradictory, unpredictable and undepictable, well into her ninth decade.