The Socially Meaningful Dimension Behind The Success of Kiefer, Richter and Baselitz 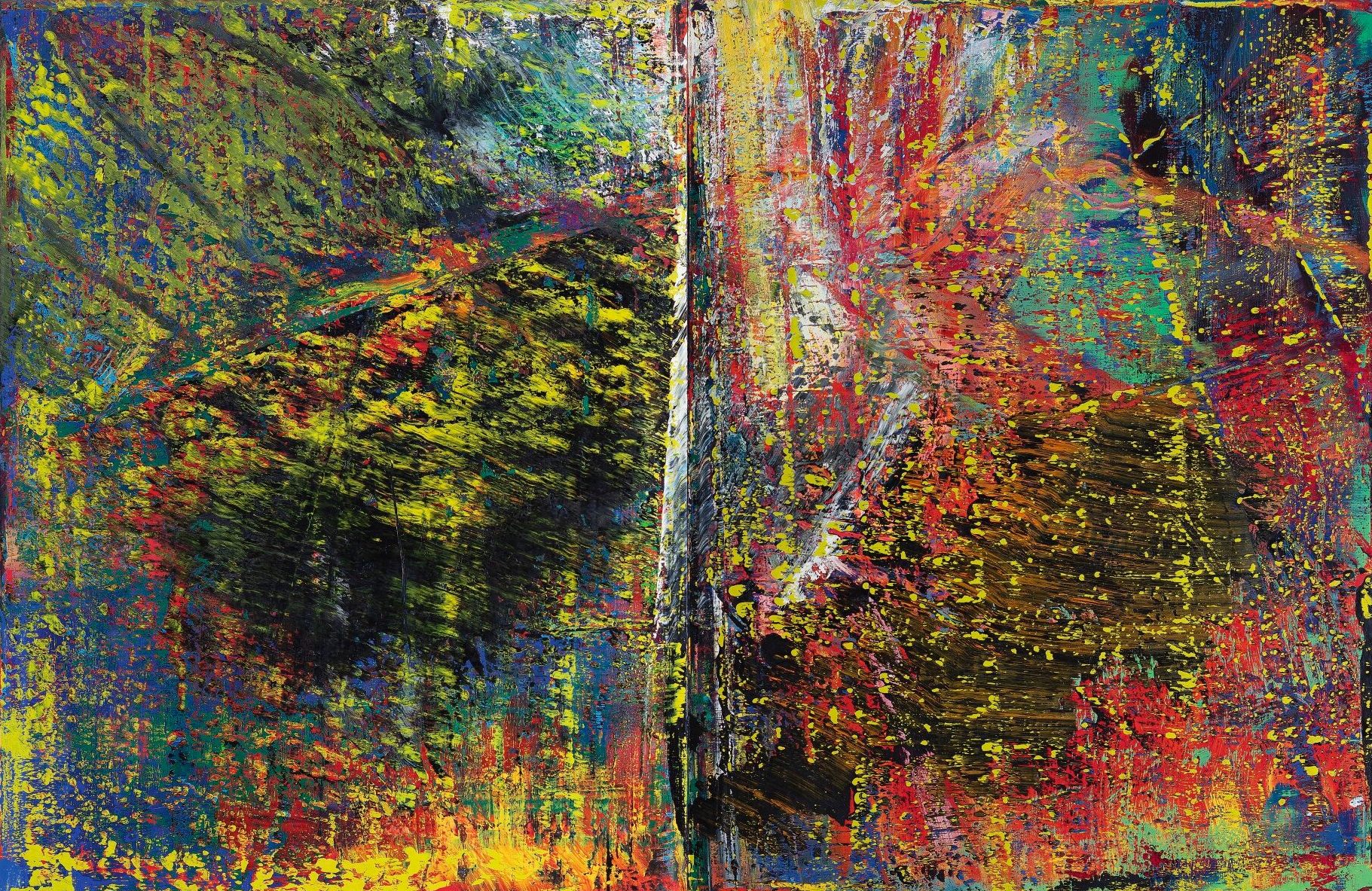 The German philosopher Theodor Adorno said that there would be no poetry after Auschwitz. If poetry was to be unthinkable, imagine art. Following the events of the Second World War, Adorno’s claim described a problem faced by German artists of every genre. How could one confront something as inhuman as the Holocaust? How could one ignore it?

In order to understand the cultural, political and visual context of post war Germany one must look back. During the Second World War, the Nazis had exploited the influence of the arts: from torch marches, to Albert Speer illuminated buildings in the night, to the propagandistic imagery of the party's film industry. In particular, they had most proficiently abused the power of the visual and colossal monumentalism with a central-point perspective, turning national iconography into ornaments of power and control and thereby leaving a post 1945 country culture with a tabula rasa that was certain to instigate a flaming crisis of identity. And yet, over the consequent years after the end of World War Two, German art was very much evasive: the subject of the country’s fascist history was out of bounds.

The country that had created a wealth of avant-garde art during the 1920s was left image dead for about twenty years: a ground zero from a somehow enforced visual amnesia and a need to invent new imagery to recreate a national identity; a project which seemingly fuelled the artistic mission of three painters in particular: Georg Baselitz, Anselm Kiefer and Gerhard Richter; artists whose practice has stood out beyond the efforts of any other recent painter longing for appreciation of national essence; not to exhume history’s painful memories, not to redeem their country, but to do a collective act of memory for a society that didn’t want to forget, but didn’t know how to remember.

Consciously placing their work after conceptualism and minimalism, these artists’ denial to curtsey to the hypocrisies that conceived representational painting as a form of regression allowed them to experiment with the medium and the canvas whilst dealing directly with the ghosts of the motherland and the citizens’ relationship to their collective past, providing a compelling form of visual expression to the spiritual plight of humanity of the late twentieth century.

According to the German philosopher Jürgen Habermas in order for public and inclusive memory work to be realised, what Germany needed was an unrestricted and non-coercive discourse. It is necessary to mention the name of their predecessor Joseph Beuys, who explicitly referred to the Holocaust in a number of his artworks. However, it is Kiefer, Baselitz and Richter who, significantly over the course of the post-war years, achieved this precise type of discursive and pluralistic practice by adapting neo-avant-garde strategies to the “regressive” practice of representational painting. Indeed, their work could very much promote a critical discourse and collective reflexivity due to the fact that it was also concerned with a transformation of the medium, engaging with the public sphere and therefore performing an existential, collective and creative act of memory.

As described by Andreas Huyssen in his 1989 essay The Terror of History, the Temptation of Myth, there is a visual pleasure in Kiefer’s representation of fascist architecture:

“Being confronted with Kiefer's rendering of the interior of Albert Speer's Reichs Chancellery is like seeing it for the first time, precisely because "it" is neither Speer's famous building nor a "realistic" representation of it.” - Andreas Huyssen

What Kiefer wants us to see is an image of ruin, the ruin of fascism in the form of allegory. Somber as they are, these paintings lure the viewer into the fascination with fascist imagery so eloquently analysed by Walter Benjamin of turning politics into an aesthetic spectacle. Despite being images of fascist ruins, these paintings are monuments to the manipulative representation of power, and they affirm, through their overwhelming monumentality and persistent use of central-point perspective, the so questioned power of representation that modernism had done so much to critically reflect on. Perhaps Kiefer’s intentions were to force us to meet with the possibility that we ourselves are not invulnerable to what we so rationally condemn, while simultaneously conceiving a memorial to the lethal link between art and violence.

Parallel to his critical intentions, Kiefer’s necessity to place himself efficiently at the end of a genealogy of German art and thought gets in the way. In this specific context, Kiefer’s reworking of painterly vocabulary through multiple layered surfaces and materials such as emulsion, straw, thick oil paint and shellac seemingly weakens the paintings’ monumentality and provides a sense of melancholy; drawing in the problematic conceit that saw fascist politics as the ultimate Gesamtkunstwerk: Hitler’s infatuation with Albert Speer's illuminated buildings and his party's fanatical devotion and attempt to appropriate the music of Opera composer Richard Wagner.

Throughout his six-decade career, the German artist Gerhard Richter (b. 1932) has also explored the material, conceptual, and historical implications of painting. Like with Kiefer’s, at the heart of Richter’s practice there is a profound engagement with the titanic events of the 20th century, in particular with the atrocities of the Holocaust. What is more, at a time when painting was seen as, again, “regressive” -or even dead, to some critics- both his abstract and his representational -also known as “photo realistic”- paintings successfully granted Richter the status of the Postmodern saviour of painting for which he is internationally recognised and celebrated for. Indeed, Richter achieved to make his painting practice both self-conscious and self-referential by both criticising it and diminishing it.

As an allegorical representation of both his avow to the medium of painting and his commitment towards the victims of Nazism, the Birkenau series, which the artist created in 2014, consists of four heavily worked abstract paintings based on four photographs secretly taken by a Greek prisoner in the death camp of Auschwitz-Birkenau in August 1944. The photographer's name was Alex, and his pictures depict naked corpses in open-air incineration pits at Birkenau crematorium and naked women slouching towards a gas chamber.

As the art historian Benjamin H.D. Buchloh observed in his catalog essay of the Birkenau series, Richter’s life long preoccupation with whether “any artist, and more improbably any German painter, could possibly construct a credible mnemonic representation” of the Holocaust, is successfully encapsulated in the Birkenau series through the medium of painting because, whilst evoking a poetic meditation around its subject matter, it also gives form to the uneasy relationship between representation and abstraction, and the dichotomies between reconstruction and destruction, revealing how Richter covered his initially figurative representations of the snapshots -blown up to mural scale- with layers of paint in a somber coloured palette, reflecting his struggle to address the historical trauma embedded in the initial photographs, and hence comprising one of Richter’s most ambitious and important bodies of work.

The German pavilion at the 1980 Venice Biennale was what brought German artist Georg Baselitz to an international audience. The artist says:

"I was in the German pavilion with Anselm Kiefer, another provocative artist, and it never occurred to me that my sculpture was doing a Hitler salute. But when a German TV channel reported on it they played the "Horst Wessel Song" (the Nazi anthem) to accompany their story. It was outrageous. But within a week I was getting approaches from all over the world to collaborate.”- Georg Baselitz

Since his scandalous intervention at the Biennale in 1980 -the artist presented a monumental carving of a man resting his left arm between his legs as if pleasuring himself, whilst making a gesture with his right arm that could be mistaken for a straight, open palmed Hitler salute- Georg Baselitz has been regarded as one of the most important European artists of the post war era. He is internationally acclaimed for his upside down paintings, but in 1965-66, when he painted his now widely known series Helden, "Heroes" or "New Types", he was very young, and he had made very few, although intensely provocative, appearances on the international art scene. At a time when history was a touchy subject in Germany, Baselitz’s paintings delved deep into the past.

Refusing to accommodate himself to the conventions of the international art scene of the time that saw Tachism  - European version of abstract expressionism – as the new orthodoxy through which to experiment with painting, Baselitz began to introduce figures and national archetypes in his work in a representational way, painting men in landscapes in a way that resonated with German folklore. Dressed in dull coloured uniforms, Baselitz's painted his series of Heroes, men who, paradoxically, instead of appearing as what society would consider conventionally heroic, seem vulnerable, wounded and disoriented, filled with postwar tension. It is because of this paradox perhaps, that these paintings escape cliche; the contradictory subject matter is arrestingly obvious: a German hero brought down by defeat, vulnerable and powerless; an allegory for post war Germany and a metaphor for the dismissal of the house of painting itself. Indeed, albeit many of the paintings being titled "Rebel", there is one in particular that Baselitz called "A Modern Painter", conceiving a parallel between the wounded warrior and the overthrown painter that is both romantic and complex.

"What I wanted to do was something that totally contradicted internationalism: I wanted to examine what it was to be a German now. My teachers were the first to tell me that I was wrong. They said it was anachronistic. We had lost the war, but now we were free and liberated and there were wonderful times ahead in a wonderful world. But I disagreed. I had another view." -Georg Baselitz

Like Kiefer and Richter, Baselitz took on the project of rebuilding national identity and, instead of adhering to international artistic tendencies, and instead of avoiding to refer to Germany's past, he chose, like they did, to address the subject boldly and commandingly. Nowadays, Gerhard Richter is 88 years old, Anselm Kiefer is 75 and Georg Baselitz is 82. They are arguably three of the most successful living artists in the world today: their legacy extends not only to their paintings' materiality and their influence on younger generations of artists, but also to the German people, and far more, the human psyche.