What's Up This Week 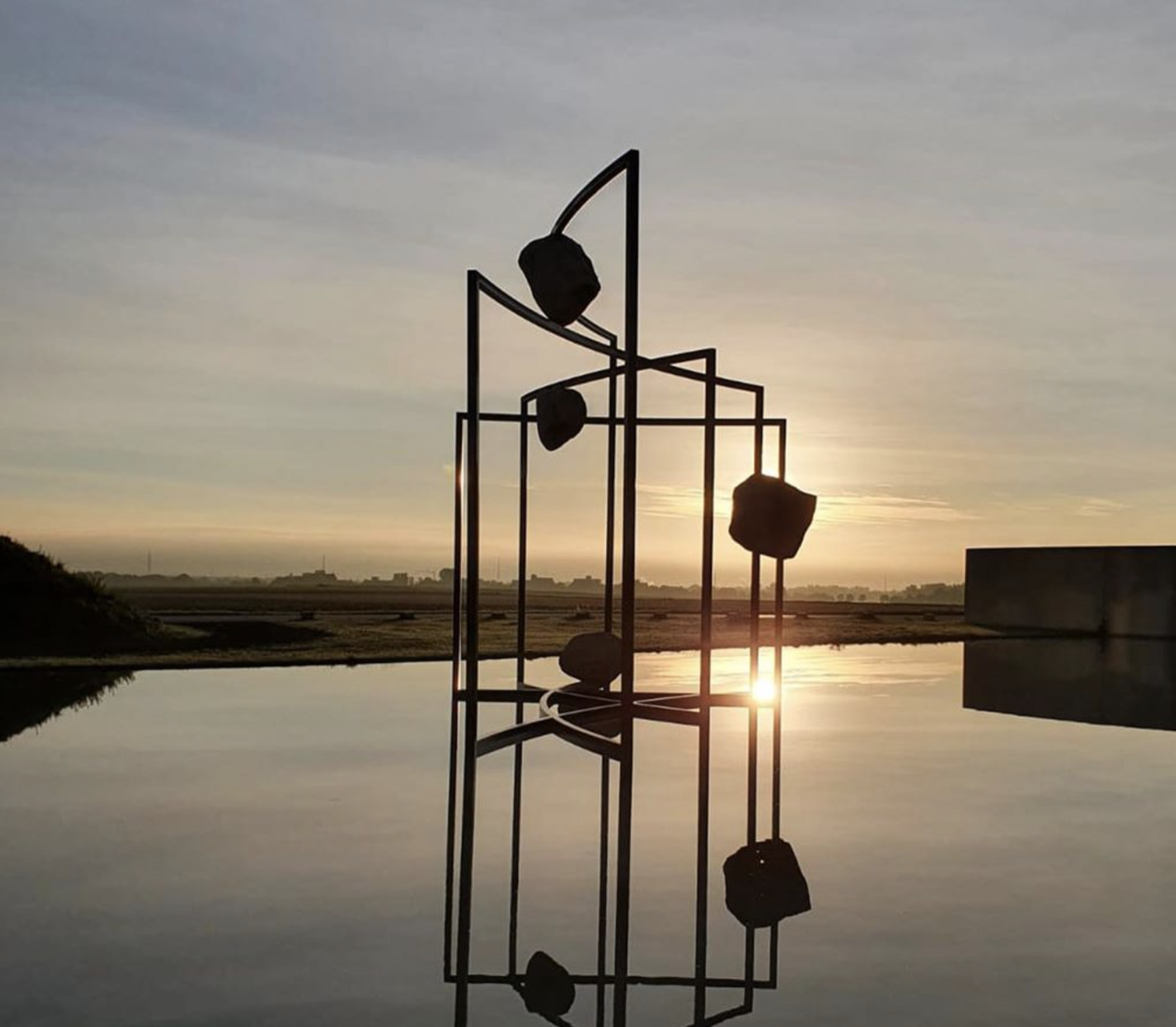 at The Langen Foundation in Düsseldorf, Germany

Engaging with Tadao Ando's architecture, the Berlin based What's Up artist Alicja Kwade has conceived this extensive solo exhibition in the vast premises of the Langen Foundation in Germany. Known for confronting the laws of physics, Alicja Kwade's practice questions the concepts of space, time, science and philosophy. In Kausalkonsequenz, symbolically charged everyday objects like clocks and lamps, together with elementary materials like gold, wood or copper are combined in precise and poetical artworks which succeed in presenting the seemingly obvious as deceptive, challenging the viewer's perception in Kwade's ever magical style.

The legendary Berlin nightclub Berghain, currently closed because of the pandemic, has teamed up with the collector Christian Boros to show art produced in the city’s studios during the lockdown. The exhibition will include works by more than 80 artists, such as Olafur Eliasson, Rirkrit Tiravanija, Wolfgang Tillmans, Anne Imhof and Isa Genzken. The new works will be shown over the 3,500 sq. m space in Berghain—on the dance floors and in the Panorama bar, and for the first time ever, everyone over 16 years old will be allowed into the premises. The link between Boros and Berghain has its roots in the 1990s, after the fall of the wall, when artists and D.J.s descended on this seemingly lawless city to organize exhibitions and raves in cavernous empty buildings. At that time, Berghain's owners set up their first nightspot in the Second World War bunker that now houses the Boros Foundation collection. In this mixing of club culture and visual art reminiscent of the golden days of the 1990s, “Studio Berlin” shows what’s possible under adverse conditions, which is when Berlin’s culture is so often at its best.

On the occasion of Berlin Gallery Weekend, the second edition of the art fair MESSE IN ST. AGNES will showcase over 200 artworks from both the primary and secondary market in König Galerie in Berlin. The fair will include works by internationally renowned artists such as Rita Ackermann, Daniel Arsham, Georg Baselitz, Nicole Eisenman, Katharina Grosse, Man Ray, Tomas Saraceno, Lee Ufan and many others.

What's Up artist Georg Baselitz new ‘Darkness Goldness’ paintings either continue or disrupt the artist's signature inversion of his subject matter, which he began in 1969 as another strike against naturalism. Quite literally hand-prints, these paintings are at once familiar and fantastical, rich with uncanny bodily and painterly gestures. The exhibition also features new sculptures, the artist’s first since 2013. Although they are named for artists Baselitz admires, including Wols, de Kooning and Fontana, Baselitz says these hands represent nothing but themselves – ‘emblems’ of identity like the hands in cave paintings or ‘fingerprints in a passport.

A Focus on Painting

Curated by Julia Peyton-Jones, this exhibition will feature four artists from different generations and at different points in their careers: Alvaro Barrington, Mandy El-Sayegh, Rachel Jones and Dona Nelson. A Focus on Painting explores the artists’ unique approaches to painting – whether through an innovative approach to modes of display. The individual artists’ presentations on display throughout the gallery will demonstrate the wide-ranging possibilities of painting today, while exploring themes such as the formation of identity, the communication of meaning and the subjectivity of interpretation, as well as the boundaries between personal expression and collective experience.

White Cube is pleased to present an exhibition of new work by What's Up artist Danh Vo exploring the seduction and violence of Catholicism; the parallels between the export of Christianity and the contemporary travel of multinational brands; and the interconnected nature of life. Vo’s pastoral exhibition appeals to a basic human desire to escape or perhaps retreat. This is the Garden of Eden after the coming of knowledge, where stained glass windows and religious statues inhabit plant gardens with remnants of banal packaging and cardboard boxes have Coca Cola logos painted with gold leaf, elevated to the status once occupied by Eastern Christian icons. As such the exhibition smacks of nostalgia, a pastoral longing for Creation itself, but also of self-aware presentness, an ability to plant and create optimistically, searching out new forms for us to test.

Gagosian is pleased to present an exhibition of new paintings by African American What's Up artist Stanley Whitney, the artist's first major exhibition in Rome, where he lived for five years during the 1990s: "Rome always clarifies and inspired my work" the artist says. Whitney’s vibrant abstract paintings unlock the linear structure of the grid, imbuing it with new and unexpected cadences of color, rhythm, and space. Deriving inspiration from sources as diverse as Piet Mondrian, free jazz, and American quilt making, Whitney composes with blocks and bars that articulate a chromatic call-and-response within the bounds of each canvas.

David Zwirner is pleased to present an exhibition of new work by the Belgian-born, New York–based What's Up artist Harold Ancart. On view in one gallery space will be a new series of paintings that depicts trees. Pointing to references as varied as René Magritte, Egon Schiele, Gustav Klimt, and Piet Mondrian, who approached this subject matter in distinct ways, Ancart’s tree paintings blur form and color, figure and ground, and figuration and abstraction. In the adjoining gallery space, there will be two multipanel canvases that situate the viewer between a mountain-scape and a seascape, both monumental in scale.

Curated by What's Up artist Stefan Brüggemann, this exhibition reminds us that the extreme pace of modern life triggers a cascade of questions and counterpositions. Brüggemann's work is exhibited along with three internationally renown artists, Oriol Vilanova, Jay Rechsteiner, and Gardar Eide Einarsson. Each artist has a different background and style; however, the commonality is their insightful observation of the ever-accelerating information overload of the modern world. This show wishes us to tear down the cultural, political and economic monuments of late capitalism. The addendum (MISFITS) reflects the artists’ embrace of their outsider status in the art world and gives a passing nod to Foucault’s conception of the ‘monster’ as ‘the fundamental figure around which bodies of power and domains of knowledge are disturbed and reorganized’. This show stands as a sociological record of human behaviour in the age of capitalism.

The Hall Art Foundation is pleased to announce the opening of their exhibition by German What's Up artist, Katharina Grosse at its Schloss Derneburg location. Considered to be one of the most important painters working today, Grosse’s sprawling, multidirectional paintings and installations overflow with the pigments used to render them. Sometimes a painting dissolves into fields of color, while a few paintings are infused with a glowing, pastel-like fleshiness that lends their contours a playful quality. Grosse’s heavily layered works seem to be at odds with themselves, and it is through this juxtaposition that one can understand the authentic meaning of the artist’s creative conscience: the active destabilization of perspective. This has little to do with effacing the tradition of painting, but rather concerns the realization of surrounding structures that transform particular sites over particular durations of time.

The young British-Kenyan painter Michael Armitage (born 1984 in Nairobi, Kenya) has quickly become one of the most exciting voices in contemporary painting. In his large-format, nuanced oil paintings, he combines East African and European motifs and painting traditions. He draws inspiration from political events, pop culture, folklore and personal memories, weaving these into mythically charged and dreamlike images. With “Paradise Edict” Michael Armitage, who will be awarded the renowned Ruth Baumgarte Art Award in the fall, celebrates his first major presentation in a museum setting and his first show in Germany.