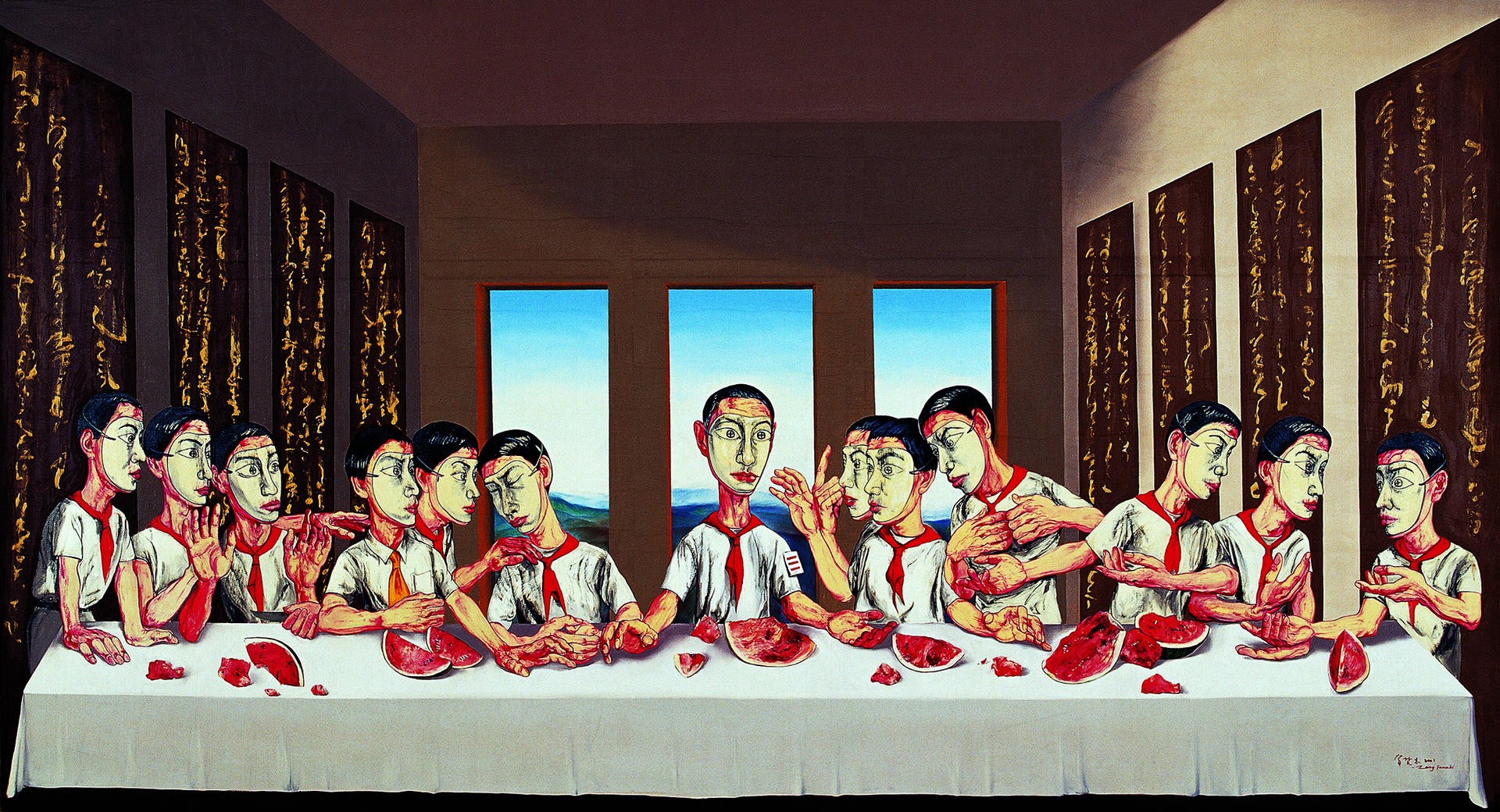 In 1989, Chinese contemporary artists entered the international art scene with the exhibition Magiciens de la terre in Paris, soon followed by the China’s New Art post ’89 in Hong Kong and China Avant Garde in Berlin, rapidly encountering public favour and interest from collectors. From the late 1990s, China’s economy began to flourish, and the country became a member of the World Trade Organisation. The Chinese Art ecosystem was positively affected by this: Beijing’s galleries grew from only 5 in 2000, to a total of 300 in 2008. This increase was due to a “Museum boom” during the late 90s: most notably the Guanfu museum of classic arts inaugurated by Ma Weidu and the Poly Museum founded in 1999. In spite of the new attitude of the Chinese government towards museums, it must be said that the “cultural institutions validating model”, typical of Western countries, cannot be applied to the Chinese art market. Chinese auction houses successfully sell new artworks straight out of the artist’s studio, which would be unusual both in Europe and the US. This brings the spotlight on the “uniqueness” of the domestic Chinese art market, which is increasingly detaching itself from its Western counterparts.

In 2005, Chinese contemporary art was featured as a category for the first time at Christie’s and in 2006, Sotheby’s and Christie’s combined made $190 million revenue from ‘the Asian sale’, of which most of the artworks sold were by Chinese artists. In 2014, 47 Chinese artists ranked among the top 100 contemporary artists by turnover, compared to only 19 from the US. The display of Chinese contemporary artworks at the prestigious China Club in Hong Kong, a popular meeting hub among wealthy expatriates and business people, acted as a turning point for Chinese contemporary artists, that started becoming increasingly known to a broader audience. The curatorial suggestions of Johnson Chang, a friend of China’s Club owner David Tang, also played a fundamental role. Throughout the years, in spite of the 2008 global Economic crisis, the Chinese art market’s performance has managed to remain relatively stable, keeping the interest of both Chinese and international collectors, as it can be noticed by the market performance of artists such as Zhang Xiao Gang and Zeng Fanzhi, whose market record prices and sensational turnover annually.

Contemporary Chinese art in the context of the auction market across the first two decades of the twenty-first century relates to a genre of art that, during the 1980s and 1990s, was referred to as “Avant-garde”,  “experimental” or “unofficial” art.  These artists grew up during China’s Cultural Revolution, the socio-political movement initiated by Mao Zeodong in 1966 which lasted until 1976. During these years, the peasant class started to receive an art education, finalised at the production of imagery that had to respect the “orthodox style” established by the Propaganda. Such an artistic production would have ultimately resulted into the, to use Mao’s words, “military and cultural victory” of the Public Republic of China.

The environment in which Chinese contemporary artists commenced their careers, therefore, was entirely composed of radically mainstream subjects and techniques and was certainly not the most favourable to create works characterised by a more personal touch. Although Maoist ideologies must have certainly affected these artists’ life, they completely failed to weaken their subjectivity, as noticeable by the powerful emotional nature of their works. Art should never be a servant of Politics, and after having painted those models required by the curriculum in class, artists such as Zeng Fanzhi, Liu Xiaodong, Fang Lijun, Yue Minjun and Zhang Xiaogang immediately implemented their own subjects and artistic techniques in their works.

“At that time, what I desired to express was my feelings: I always get a special feeling when I see the emotions of people in pictures.” - Zeng Fanzhi

Escaping from the strict norms of Social Realism, Zeng Fanzhi found great inspiration in the German Expressionism, of which he mastered the thick and emotionally charged brushstrokes and the implementation of a darker palette, as can be noticed from his early works such as the Hospital and Meat series. In 1993, Zeng relocated to Beijing, where the unfamiliar environment left him feeling isolated. It is during this time that he started his new Mask series, shifting from the “brutality and rawness” of his past works towards apathetic subjects. The artist produced his Mask works from 1994 to 2004, and they are dominated by the sense of alienation and solitude that was affecting the artist in that particular period. The large and scary eyes of his masks, deprived of any particular expression, provokes a deep sense of discomfort in the viewer: in fact, the artist aims at denouncing the profound social transformations of our times, due to the excessively accelerated development of the society, eventually leading to the loss of human contact.

It is worth mentioning the skyrocketing price achieved during the 2013 auction at Sotheby’s Hong Kong: at the Asian Contemporary 40th Anniversary Sale, Zeng Fanzhi's The Last Supper was sold for US $23.3 million, setting a new record for a contemporary Asian artwork.

Liu Xiaodong is another artist who refused to follow the rules of Socialist Realism in Chinese art, according to which figures had to be represented as "decent, grand, and deprived of any imperfection". The artist’s oeuvre is, in fact, characterised by an “honest” style and daily life subjects. As the artist himself recounted in many interviews, he usually takes photographs and videos of people around him, to then depict them on his canvas in a sort of ‘recollection in tranquillity’, as the Romantic poet William Wordsworth may say, producing works characterised by brushstrokes layered with meaning. As mentioned above, ordinary people coming from all around the world are the protagonists of his canvases: the 2015 exhibition “Painting as shooting”, organised at the Fondazione Giorgio Cini in Venice during the 56th edition of the Venice Biennale, may be the best example of it. The paintings on display flew the visitors to the rural corners and urban centres of the artist’s motherland, China, including the autonomous regions of Tibet and Xinjiang, as well as around the world, from Cuba to Greenland, Iceland to Thailand.

Fang Lijun’s work aims at conveying a message of denouncing towards the oppression of human rights in contemporary society: protagonists of this works are shaven headmen who, similarly to the masked men represented by Zeng Fanzhi, seem to be incapable of expressing any real emotion or to establish a dialogue with each other. Other elements which are greatly present in his works are water and flowers: in his Swimming series, Fang Lijun depicts a man drowning into the water, representing the sense of impotence he felt during the oppressive times he was living, and that is still affecting the contemporary society, as reported by the artist himself during a recent interview:

“One could say that our society is progressing at a runway pace, like an express train. Do you know the high-speed trains in China? We launch these trains without installing a breaking- systems. In traditional Chinese philosophy, and even in contemporary society, one is always conscious of the smallness of people and their powerlessness.” - Fang Lijun

According to Marcello Kwan, a specialist in Asian contemporary art at Christie’s, the Chinese contemporary artist Yue Minjun is, with his works, directly answering to Mao Zedong, who used to be the idol: with his ever laughing men, (a depiction of the artist) he is using himself as the basis for a new idol through a rather unique subversion:

“To laugh is an expression of pain. When you have endured the maximum level of pain you can tolerate, all you could do is to laugh” - Yue Minjun

The artist defines himself as a pessimist, and the laughter which populates all of his oeuvre is, in truth, the scream of grief of the whole mankind, of which artists must carry the weight and translate it in something incredible in their works.

If for Yue Minjun the starting point for producing art is his himself, on the other hand, Zhang Xiaogang found the theme for his oeuvre after discovering his family photos, which reminded him of the memories destroyed by the contextual cultural setting of the Cultural Revolution in Chinese history. According to the artist:

“There was a complex relationship between the state and the people that I could express by using the Cultural Revolution. China is like a family, a big family. Everyone has to rely on each other and to confront each other. This was the issue I wanted to give attention to and, gradually, it became less and less linked to the Cultural Revolution and more to people’s states of mind.” - Zhang Xiaogang

Inspired by these old photographs, therefore, he started producing his Bloodline series, that made him one of the favourites contemporary Chinese artist among western collectors. It is worth mention the 2014 auction result of Bloodline: Big Family No. 3, sold at Sotheby’s Hong Kong for more than $12 million.