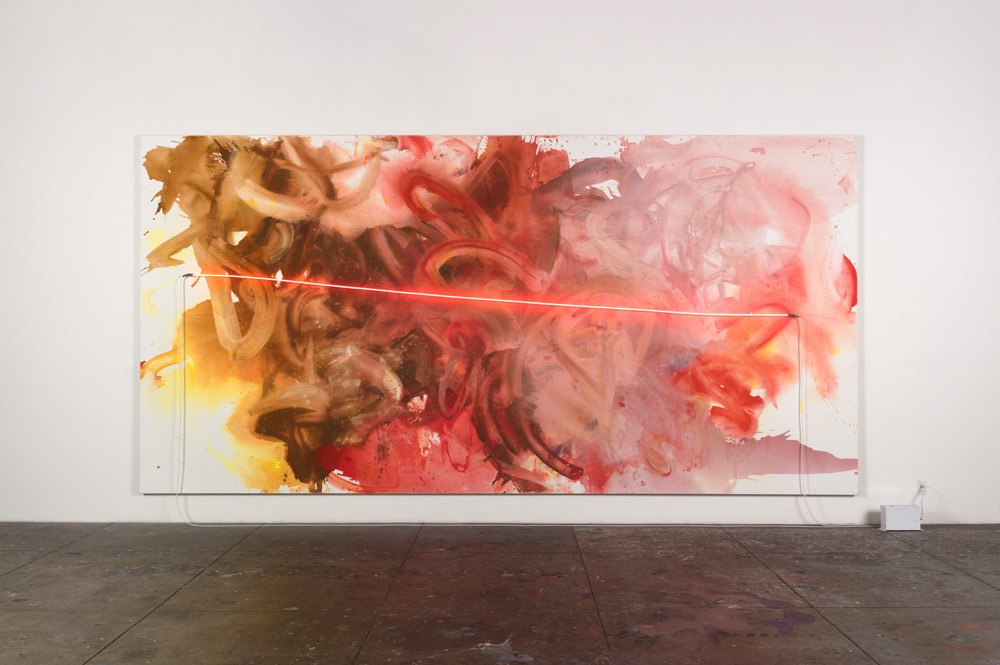 Employing an array of artistic mediums, the artists in this curation redefine the genre of Abstraction and confirm its enduring relevance in today’s contemporary art scene. Influenced by their great predecessors, their works revive the decades long tradition by adapting the subject matter to focus and explore contemporary ideas of collective significance. Exploring the plurality and malleability of the genre, the distinctive language of their work, simultaneously ethereal and dense, alludes to narratives and ideas outside the picture frame.

Mary Weatherford (b. 1963, Ojai, California) has become increasingly recognised as one of the leading painters of her generation, as well as one of the most astute and daring practitioners taking on the legacies of American abstraction. As she explores and expands the medium’s possibilities, she honours its history by seizing opportunities to break with tradition at every turn. Over the course of her career, she has produced feminist revisions of large-scale Color Field painting, posited new directions for the landscape genre, and explored the social histories of California. Her notable incorporation of sculptural elements—including the neon tubes that have been a presence in her work since 2012—as well as her fearless and physically embodied approach to painterly gesture, have allowed her to employ abstraction as both a formal language and a poetic, highly personal mode of engagement with the world outside the studio.

The interdisciplinary practice of Donna Huanca evolves across painting, sculpture, performance, choreography, video and sound, crafting a unique visual language based in collaboration and innovation. At the very heart of her oeuvre is an exploration of the human body and its relationship to space and identity. Her live sculptural pieces, or in the artist’s words, ‘original paintings’, work primarily with the nude female body, drawing particular attention to the skin as a complex surface via which we experience the world around us. By exposing the naked body, while at the same time concealing it beneath layers of paint, cosmetics and latex, Huanca and her performers urge the viewer to confront their own instinctive response to the human form, which, in the artist’s hands, is both familiar and distorted, decorative and abstract.

Cerith Wyn Evans' conceptual practice explores the way that ideas can be communicated through form, incorporating a diverse range of media including installation, sculpture, photography, film and text. He began his career as a filmmaker producing short, experimental films and collaborative works, but since the 1990s has created artworks that deal with language and perception, focusing with precise clarity on their manifestation in space. Evans employs strategies of exhibition making that are often site-specific, viewing exhibitions as a catalyst to produce a reservoir of possible meanings and discursive experiences.

His poetic work derives its refined aesthetic from a wide range of influences including film, music, literature and philosophy. Visual or textual sources and ideas are often repeated across different bodies of work, an indication of his desire to keep ideas in play or to bring them back to life as raw material for future use. He harnesses the potential of language to create moments of rupture and delight, where desire and reality conjoin, evident in his series of firework sculptures where wooden structures spell out open-ended texts and fleetingly burn over a designated period of time. These performative sculptures exist only as a durational event, but take on new life when documented through photographs or film. Likewise, in an ongoing series of neon text sculptures, he uses favourite passages of text or the subtitles from films to create open-ended, powerful works that produce a retinal after-image in the viewer.

Lucy Dodd has created a painterly universe that can be understood as a radical reinterpretation of lyrical abstraction and action painting. Her works—biomorphic topographies of random and intentional marks—resemble painted evocations of cosmological and spiritual landscapes. They are characterised by an emphatically process-oriented approach to painting and the use of unusual colour pigments, which often derive from nature and Dodd’s personal environment, often incorporating elements of ritual and theater.

Dodd’s works convey a profound freedom, confidently balancing painterly control and the relinquishing of that control. Circular contours left by kombucha cultures merge with arborescent colour structures created in the chemical interplay of certain colouring agents with the canvas. These elements are embedded in moving, organic whirls of colour attained through the application, smudging, subtraction and re-addition of pigment extracts. The result are biomorphic colour fantasies and atmospheric compositions made of mineral patterns, spots, smears and traces recalling fossils, corals, sky constellations or rock formations. Dodd’s works advance the pictorial repertoire of abstraction in unexpected ways. Possessed of an ethereal, fearless beauty, they are the product of an aesthetic vision that expands the legacy of high modernism to include archaic and cultic aspects.

Born 1986 in Colombia. Lives and works in various locations.

Oscar Murillo leaves his calligraphic, mixed-media canvases on his studio floor to gather dirt and dust; the resulting paintings explore incompletion, transformation, and the realities of maintaining a studio practice. Murillo repurposes discarded scraps of previous works, turning his gestural abstractions into layered palimpsests that meditate on time and process. The artist’s inventive, itinerant practice also spans drawing, sculpture, installation, video, and performance and often considers notions of circulation and globalization. Murillo has exhibited in New York, London, Paris, Berlin, Hong Kong, Bogotá, and Los Angeles. His work has sold for six figures at auction and belongs in the collections of The Broad, Moderna Museet, Fondazione Prada, the Museum of Modern Art, the Rubell Museum, the S.M.A.K. Museum of Contemporary Art, and the Museum of Contemporary Art, Los Angeles.