ELEVEN RISING ARTISTS ON OUR RADAR 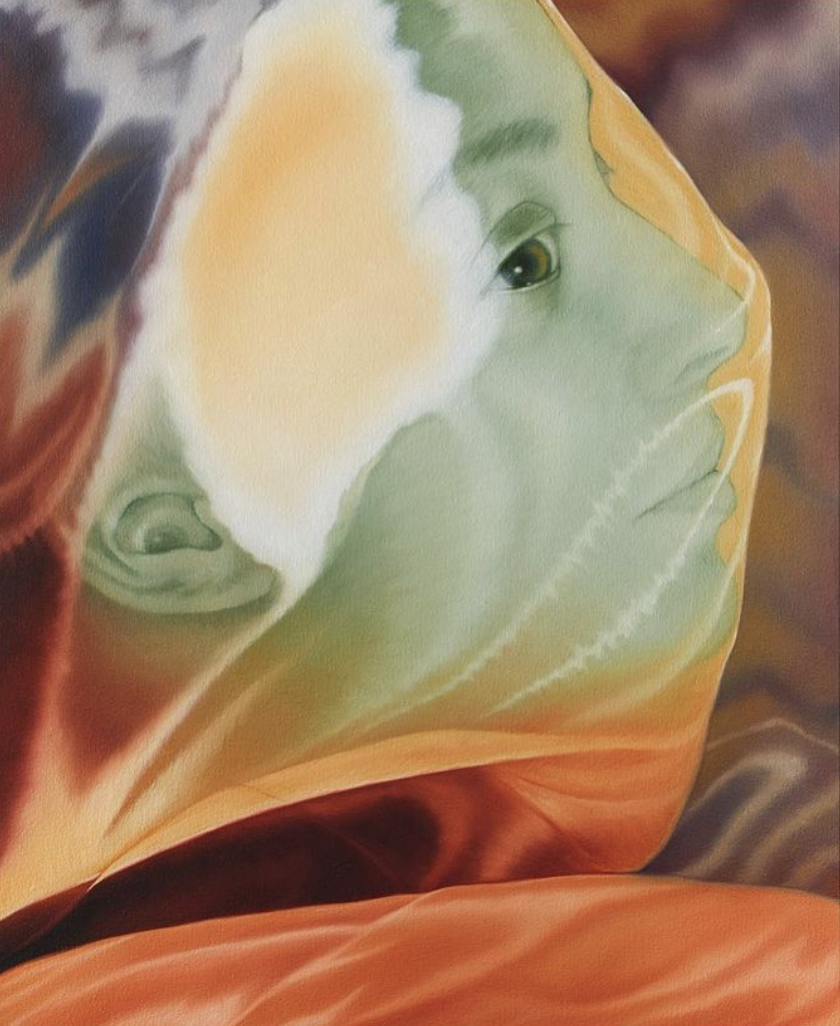 Jenny Morgan’s diaphanous paintings are inhabited by hyper-realistic figures that ebb in and out of focus—sometimes merging into the landscape or diffusing gently into a painterly fog. The artist’s compositions sometimes draw inspiration from medieval painting and historical landscape, using symbolism to expand on the idea of ‘heaven on earth.’ Morgan’s work examines the elemental relationship between human connection, collective power and the natural world.

Jenny Morgan holds a MFA from the School of Visual Arts in New York City and a BA from the Rocky Mountain College of Art and Design in Denver, Colorado. Solo exhibitions of Morgan’s work have taken place in: New York City; London, UK; Colorado; Utah; Indiana; and New Mexico. The artist’s first solo museum exhibition, Skin Deep, took place at the Museum of Contemporary Art Denver in Colorado in 2017. Her 2013 solo exhibition How To Find A Ghost was named one of the top 100 fall shows worldwide by Modern Painters.

B. 1989 in Pennsylvania, USA. Lives and works in Brooklyn, New York.

Inspired by the artistic trend of Biomorphism, Alicia Adamerovich’s practice studies the anthropomorphic nature of objects, sensations, and emotions, and highlights their creative potential. Her work takes form from her unconscious, from her interior thoughts and her psychic evolution. The artist divides her body of work into two distinct entities: “diurnal thoughts” and “nocturnal thoughts.”

The artist’s graphite drawings and paintings represent a bridge between the real world and a fictional space. In the manner of her predecessors, like the couple Kay Sage and Yves Tanguy, who painted dream landscapes and underwater scenes populated with strange biomorphic forms, Alicia Adamerovich, illustrates a certain tension within a phantasmagorical architecture situated within an infinite horizon. She creates a balance of power between these hybrid organisms stacked upon each other or surging to the front of the pictorial composition. The handmade frames are for Alicia Adamerovich a way of leaving paper behind and exceeding drawing’s limitations in dimension. They reinforce the pictorial composition of the subject and play with hierarchies by conferring upon them the status of icons.

Cudahy is a figurative painter whose tender scenes reveal the nuanced complexities of life. In masterful compositions he creates a world for unspoken stories, intimate moments and romantic gesture. Personal and poetic, Cudahy’s figures coalesce with the atmosphere of their environments in fluid brushstrokes.

At once dark and luminous, Cudahy’s paintings often have a phosphorescent quality to them, as though they are lit from within. For the artist, how the paint is handled has its own narrative potential – the thick textures, light airy space, patterning and delicate marks are all active in the story he is creating. Alongside painting, Cudahy makes incredibly detailed colored pencil drawings, in an all-consuming process of mark making. Unlike his paintings which transform throughout the making, the challenging medium calls for the compositions to be decided beforehand.

Brice Guilbert’s canvases are heavily built up applications of paint which he makes himself. Guilbert’s paintings—all titled Fournez, the local pronunciation of the Piton de la Fournaise volcano on La Réunion, referencing his Creole roots and upbringing in Reunion Island, off the southern coast of Africa. —use impasto to create the illusion of an erupting volcano. Teetering on the edge of abstraction, Guilbert’s paintings are all created from memory as he attempts to capture his unique experience of the volcanic landscape of his home, using abstraction as a means of engaging with meditative, spiritual and philosophical understandings of nature.

The volcano motif repeated in these works is sculpted by use of a unique process involving heated wax and oil paints. The rigorously crafted surfaces imbue a certain sense of sensuality and laboured intensity. Luminous and layered, they change greatly depending on the position of the viewer. The subtle details and color shifts only expand in richness and fullness when studied more at length and at alternate depths.

Brice Guilbert has shown in multiple exhibitions throughout Europe. Guilbert has mounted solo shows in Brussels, Berlin, and Grenoble and has shown in group shows in New York, Bucharest, Ghent, and beyond. In addition to his painting practice, Guilbert co-founded Island in Brussels, and has published two books. His Creole songs and performances are highly regarded for their poetic and harmonious nature.

Sourced from screenshots captured across various media – from Olympic competitions to film stills and online newspaper articles – his artworks explore the boundary between sincerity and irony, drama and melodrama, pathos and bathos. Each painting gives a feeling of deja vu, as though distant memories are quickly bubbling to the surface as we look back on our lives.

The subjects of Joseph Yaeger's paintings are tightly bound to the American artist's upbringing and are full of references to American popular culture.

Poppy Jones graduated from the Royal College of Art (MA Fine Art printmaking, 2010). Jones has shown work in solo and group exhibitions including the Bluecoat, Liverpool and Newlyn Gallery, Cornwall. Recent residencies have included KK Museum (Denmark), West Dean (Sussex) and the Horniman Musuem Library (London). Her work has been awarded by the Arts Council, the Alf Dunn Award, The Lynn Painters Stainers Young Artists Award and Falmouth Universities Graduate Pre-incubation award. Since graduating, she has been a Visiting Lecturer at Falmouth university, University of Brighton and currently at West Dean, Sussex.

Poppy's distinct process of printing results in images which she transposes on to identically sized panes of recycled suede, silk or leather. Distilling familiar sights from the home in unfamiliar close-up – an empty wine glass, a jacket collar, blooming flowers, the shadow from a window - Poppy uses one-off printing and photographic processes to then indelibly imprint these passing moments in time on to surfaces common to clothing. Her work is resonant of Cy Twombly's polaroids, but with a contemporary aesthetic and a distinctive materiality.

B. 1981 in Montgomery, Alabama. Lives and works in New Jersey.

Danielle Mckinney (b. 1981) creates narrative paintings that often focus on the solitary female protagonist. In these intimate portraits, Mckinney captures the figure immersed in various leisurely pursuits and moments of deep reflection. Engaging with themes of spirituality and self, her paintings uncover hidden narratives and conjure dreamlike spaces, often within the interior domestic sphere.

With a background in photography, Mckinney paints with an acute awareness of the female gaze, employing deeply colorful hues and nuanced details with cinematic effect. Mckinney received her BFA from Atlanta College of Arts and holds an MFA in Photography from Parsons School of design.  Her work has most recently been presented in exhibitions at Fortnight Institute, New York; Half Gallery, New York and FLAG Art Foundation, New York. The artist lives and works in Jersey City, NJ.

Eliot Greenwald is a self taught artist whose work speaks to the absurdity of the human mind. His sculptures are a rejection of reality, and a rebellion against the banal. Skillfully crafted, teetering on hyper-real, Greenwald draws the viewer into his world with a twist of warped and exaggerated illogicality.

In his Night Car series,  each work depicts a car in the dark of the night, its headlights beaming and illuminating its travels through strange, uncanny sceneries. Vibrant but simply composed, each piece depicts tall, vacant forests, illuminated by the glow of twin planets. Intentionally portrayed from a third person angle of perception, the disproportionately tall trees and daunting silhouettes lend an eerie mystery and yet a sense of familiarity as it brings to mind the scenes of a night drive. Drawing the viewer into a twisted and warped universe, the exaggerated illogicality of his Night Car scenes reflect Greenwald’s fascination with the absurdity and distortions of the human mind.

Filled with biomorphic gestures, flesh and curves, Aks Misyuta’s paintings are populated by seductive characters, mainly women, who lack personal features. Grotesque and cartoonish, the artist describes them as somewhat morphed depiction of the people and moments around her. Inspired by people, indeed, as she defines her working process as a “form of self-portrait”. “The ‘inflatable’ appearance is a way to depict our vulnerable nature – just a momentary pinprick is enough sometimes to destroy,”  “So, for me, it’s all about self-cognition and interactions: all the figures, like balloons, are floating in their own pensive universe.”

Aks Misyuta works by intuition and makes no preliminary sketches. She covers the canvas with a single color while waiting to see the “invisible lines” appear. One can notice some recurring objects in her work, such as watches, flowers or mirrors. As concerns watches, they are always accompanied by the title “Time-waster (…)”,thus forming a series of paintings with sensual and pensive postures, a kind of feminist manifesto for the right to waste your time, a commitment to “non-productivity” in the face of the expectations and orders of a traditional patriarchal culture.

Harminder’s work has engaged with many subjects but there is a continuous exploration of portals, be it spiritual, political, or personal. His performance work has brought ancient Indian folklore and mysticism into direct contact with bombastic western pop music and live colour field painting; collided occult inspired dreamscapes with hazy laser penetrated reverse baptisms; transported field recordings made in his family’s Gurdwara in Punjab,  across the world, replaying them through a speaker system lodged in his throat.

Exploring ideas centred around the universality of condition, tantra, spiritual and cultural cross pollination and the internal and external body, Judge’s work takes the form of performance, video, installation and painting. He has shown in spaces such as The Royal Academy, London; Halle 14 Centre For Contemporary Art, Leipzig; IKON Gallery, Birmingham; CCA Warsaw and The New Art Gallery Walsall.

His primary medium is painting of which he uses to question the classical codes of the bi-dimensional support. His works are immersive and have been activated by live performances. They are also often installed as standing or suspended objects. The large scenographies enable him to engage the spectrum of classical painting. The subjects, patterns, and archival material draw attention to postcolonial rhetorical questions and criticisms that confront history and emphasize its present-day relevance within large scale streams of information and media.