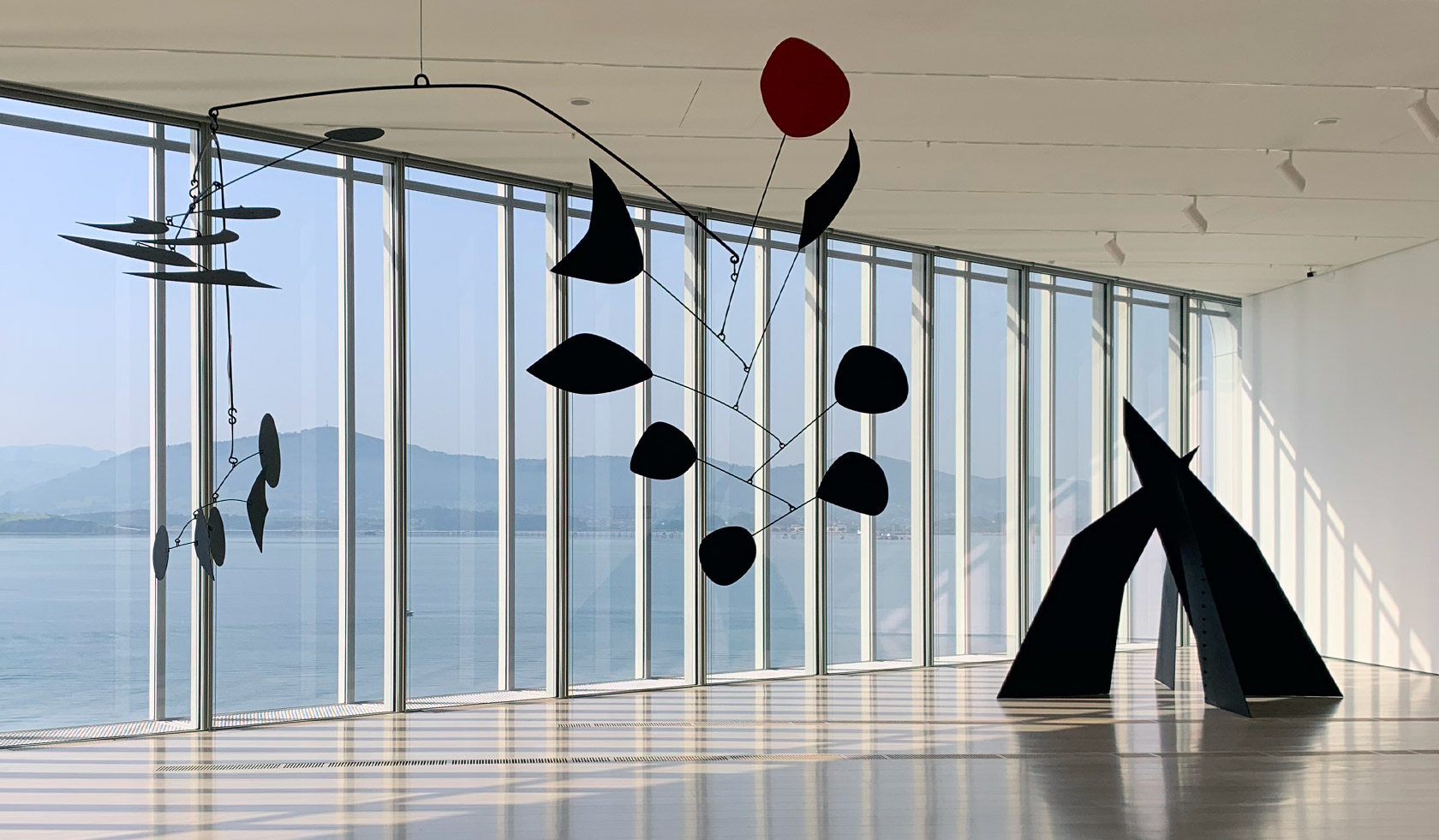 Since the early twentieth century artists have been incorporating movement into art. This manifestation of their fascination with motion soon became referred to as kinetic art. In presenting works of art which moved, or which gave the impression of movement, Kinetic artists offered us some of the most quintessential expressions of modern art's concern with presenting rather than representing living reality, soon growing into a lively avant-garde art movement after the Second World War.

In creating paintings, sculptures, and art environments which relied on the presentation of motion for effect, the Kinetic art movement was the first to offer works of art which extended in time as well as space. This was a revolutionary gesture: not only because it introduced an entirely new dimension into the viewing experience, but because it so effectively expressed the new fascination with the interrelationship of time and space which defined modern intellectual culture since the discoveries of Einstein.

Kinetic artists often presented works of art which relied on mechanised movement, or which otherwise explored the drive towards mechanisation and scientific knowledge which characterised modern society. Different artists expressed a different stance on this process, however: those more influenced by Constructivism felt that by embracing the machine, art could integrate itself with everyday life, taking on a newly central role in the Utopian societies of the future; artists more influenced by Dada utilised mechanical processes in an anarchic, satirical spirit, to comment on the potential enslavement of humankind by science, technology, and capitalist production.

Many Kinetic artists were interested in analogies between machines and human bodies. Rather than regarding the two entities as radically different - one being soulless and functional, the other governed by intuition and insight - they used their art to imply that humans might be little more than irrational engines of conflicting lusts and urges, like dysfunctional machines. This idea has deep roots in Dada, but is also related to the mid-century concept of cybernetics. A few were the artists that explored the possibilities of the movement, but the following three really made a long standing impact on art history and the endless potential of combining pioneering technology, mechanics and engineering with art, leaving behind a legacy of outstanding beauty and relevance.

Born Panagiotis Vassilakis in Athens, Takis (1925–2019) spent more than seventy years expanding the purview of art and taking it into domains previously belonging to experimental physicists. A leading figure in the kinetic art movement of the 1960s, he made sculptures, paintings, performances and sound works incorporating invisible forces as a fourth dimension − especially magnetics, his lifelong subject of study. Among his many works involving electromechanical devices, often salvaged from army surplus stores, are the ‘Signals’ series, antenna-like sculptures topped with metal shapes or flashing lights that sway in response to the slightest vibrations. Takis also created reliefs, paintings and self-performing sculptures that use magnets to animate metallic objects suspended near their surfaces. While another series, titled ‘Musicals’, are automated instruments employing electromagnets and electric guitar pickups to create reverberant sounds the artist called ‘raw music’.

Active in Paris, London, New York and his native Greece, Takis met the Beat poets, The Beatles, and Marcel Duchamp, the latter of whom dubbed him ‘the ploughman of magnetic fields and signalman on soft railroads’. During his career Takis channelled aspects of his research into social spheres, regarding his discoveries as forces for peace and healing. In 1960, he launched his own version of the Cold War space race, using magnets to suspend the poet Sinclair Beiles mid-air, the climax of a public event at which the poet read Takis’ anti-war ‘Magnetic Manifesto’, ahead of Yuri Gagarin’s historic flight a year later. Also in 1969, he co-founded the Art Workers Coalition in New York, pushing for more artist’s rights and diversity in museums. Until his death, the artist headed the Takis K.E.T.E., founded in 1986, a research centre for the arts and sciences in Athens that advanced his research and its practical applications for improving the quality and length of life. He also practiced Solar Yoga, a form of his own invention focused on drawing energy from the sun.

Since the 1960s, Takis has participated in numerous international exhibitions, including Documenta in Kassel, Germany (1977 and 2017); the Venice Biennale (1995); and the Paris Biennale, where he was awarded first prize 1985. More recently, his work was featured in important solo exhibitions at MACBA Museu d’Art Contemporani de Barcelona (2019); Tate Modern, London (2019); Palais de Tokyo, Paris (2015); and the Menil Collection, Houston (2015).  He also received patents from the French government for his ‘Télésculpture’ and ‘Télésculpture Electromagnétique’, static and kinetic forms of sculpture animated by magnetism. Among the museums holding his works are the Centre Pompidou, Paris; MoMA and Guggenheim Museum, New York; the Menil Collection, Houston; Tate, London; and Peggy Guggenheim Collection, Venice. In 1987 Takis completed Foret Lumineuse (Luminous Forest), a multi-part installation of ‘Signals’ in the Espalande de La Défense, Paris and the city’s biggest public art commission.

Alexander Calder's invention of the mobile (a term that Marcel Duchamp coined to describe these new kinetic sculptures) resonated with early Conceptual and Constructivist art as well as the language of early abstract painting. Flat, abstract shapes made in steel, boldly painted in a restricted primary palette, black or white, hang in perfect balance from wires. While the latent energy and dynamism of the mobiles remained of primary interest to Calder throughout his life, he also created important standing sculptures, which Jean Arp named “stabiles” to distinguish them from their ethereal kinetic counterparts. These works reject the weight and solidity of sculptural mass, yet displace space in a three–dimensional manner while remaining linear, open, planar, and suggestive of motion.

Jean Tinguely was born on May 22, 1925, in Fribourg, Switzerland. As early as the late 1930s, he began to create hanging sculptures that used motors to propel them into motion. He later called his form of mechanised sculpture “Méta-Malevich.” In 1954, art historian Pontus Hultén coined the term “Méta-mécaniques” (meta-mechanical devices) by which these works are now known. Tinguely studied at the Allgemeine Gewerbeschule Basel under Julia Ris from 1941 to 1945. There he discovered Kurt Schwitters’s Dadaist work, which would have a great influence on his constructions. Tinguely went through a brief Surrealist painting phase after World War II, but ultimately abandoned painting in favor of sculpture.

Tinguely’s interest in self-propelled motion is central to his sculptural oeuvre. In 1953 he and Daniel Spoerri, a Romanian dancer and artist, planned a live event called the Autothéâtre (Automatic theater), a performance that would use a mechanical set designed by Tinguely to move colored shapes and objects around a stage without human performers. In the late 1950s, he created a series of automatic drawing machines, the Meta-Matics, which use chalk or markers to create abstract works of art through a mechanised process. His constructions, which combine junk sculpture with kinetics, are often witty, humorous, and ironic, owing a great deal to the Dadaist legacy of anti-art. Tinguely was also a pioneer in the field of art that engenders social engagement. His sculptures often rely on the spectator to push a button, pull a lever, or somehow cause them to start moving. Tinguely was also one of the artists who signed the manifesto of the Nouveaux Réalistes (New Realists, 1960–63) in October 1960.