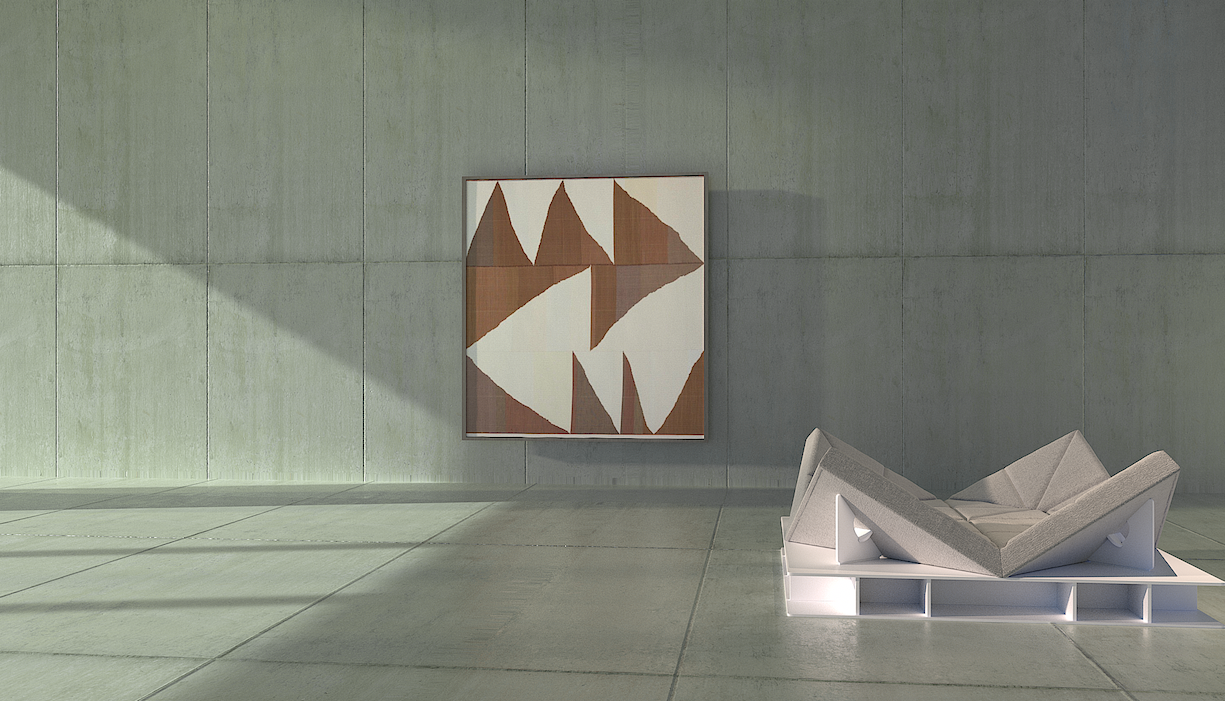 What’s Up artist Brent Wadden is acclaimed for his dazzling abstract geometric weavings, inspired by the traditional tapestry techniques of folk artists in his native NovaScotia, Bauhaus tapestries, and the quilts of Gee’s Bend, an African American hamlet along the Alabama River. The Berlin-based artist aims to challenge the medium hierarchy in the fine arts, acknowledging that textiles are often not respected as art.

“It’s hard to explain, but I can admire a Picasso just as much as a crusty wooden lawn ornament my uncle made in 1987.” Brent Wadden’s work references and aesthetics are perfectly summarised by this statement, as he combines the millennial tradition of tapestry with modernist compositions.

In order to fully understand Wadden’s archetypes and the tradition in which his art can be included, we have to take few sliding steps backwards. The invention of the practice of weaving is dated back to around 27.000 years ago and, alongside with cave paintings, it is considered to be one of the most ancient vehicle of communications and meaning. Today the word “textile art" encompasses embroideries, tapestries, weavings and many other threads techniques that in the past have been relegated under a general and less flattering label of “crafts”. The reasons behind the dismissal of tapestry from the rank of fine art are many, however one has for sure to do with gender, as this tradition was considered part of the realm of “women’s craft”. Nevertheless, it is thanks to female artists if this tradition underwent to a renaissance in the last century, from Anni Albers, who is considered the godmother of textile art, to the feminist movement in the 1970s, the decade that marks the real turning point for the resurgence of these techniques. Artists of the caliber of Judy Chicago and Miriam Schapiro employed tapestry to explore contemporary issues such as gender, identity and sexuality, pushing the boundaries between crafts and fine art and demonstrating how and why textile can be considered art. During the same years, theItalian artist Alighiero Boetti was starting what would have become a long and prolific collaboration with Afghan craftswomen, to whom he commissioned 150 embroidered world maps and many other textile works.

Brent Wadden originally studied painting, however, after having been introduced to weaving in 2004, it is almost a decade now that he mainly works as a self-taught waiver. Nevertheless, he still considers his works as paintings, due to the fact that he pierces on canvas his handmade woven weavings, creating geometric abstractions that recall well-known Leitmotiv of Abstract Expressionism and Op-art. The reference to the first art movement becomes even clearer in the light of the words used by Steven Naifeh and Gregory White Smith to describe Jackson Pollock’s artistic process in the biography of the artist published in the 1990s: “In his art, he concealed his images with layers of paint, systematically weaving them into an impenetrable web of lines, dribbles, spills and drips”. On the other hand, the Op-art inspiration is evident especially in his early weaved works, such as the series Alignment (2013-2014), where the artist constructs geometric patterns taking advantage of the contrast create by the exclusive use of black and white fibres, which helped in further emphasising his structural determination.

Shortly after, from his series TBT (2014), Wadden starts to experiment with colours as well, giving an increasing importance to a vivid polychrome palette composed by glowing oranges, bright reds, and deep blues. The yarns are a compound of synthetic and natural fibres, such as cotton, wool, acrylic, mostly recycled and obtained from second-hand shops, online sales and other wavers. This miscellany of materials leads to a miscellany of textures that produces a sinuous tactile and visual striping, and it maintains the juxtaposition of light and dark monochromes that builds a disorientating sense of the surfaces.

Nevertheless, the geometric rigour is just apparent. Indeed, Brent Wadden’s works might have flaws in the alignment of the counterparts or inconsistencies of shapes and lines, seldom creating irregular diagonals that are not purposely polished with a loom. This “cultivation of the imperfect” concur in giving a further expressive touch and in making the process more visible. Actually, the artist even changes looms every year so, with the objective of not to completely master his practice and preserve a genuine humility towards his own faux pas. The choice of the technique and materials responds to Wadden’s necessity of addressing the raging consumerism that deeply affects our modern society, inviting to reject the immediacy of the disposable culture: "The weavings retain a kind of energy which I feel partially comes from the laborious process of making, which is both meditative and physically demanding”. Indeed, hand-weaving is a time consuming process that deliberately does not allow Wadden to aspire to an immediate execution and, therefore, to the possibility of a mass production, and this dialogue between traditional art and Modernism remains a constant across all his work.