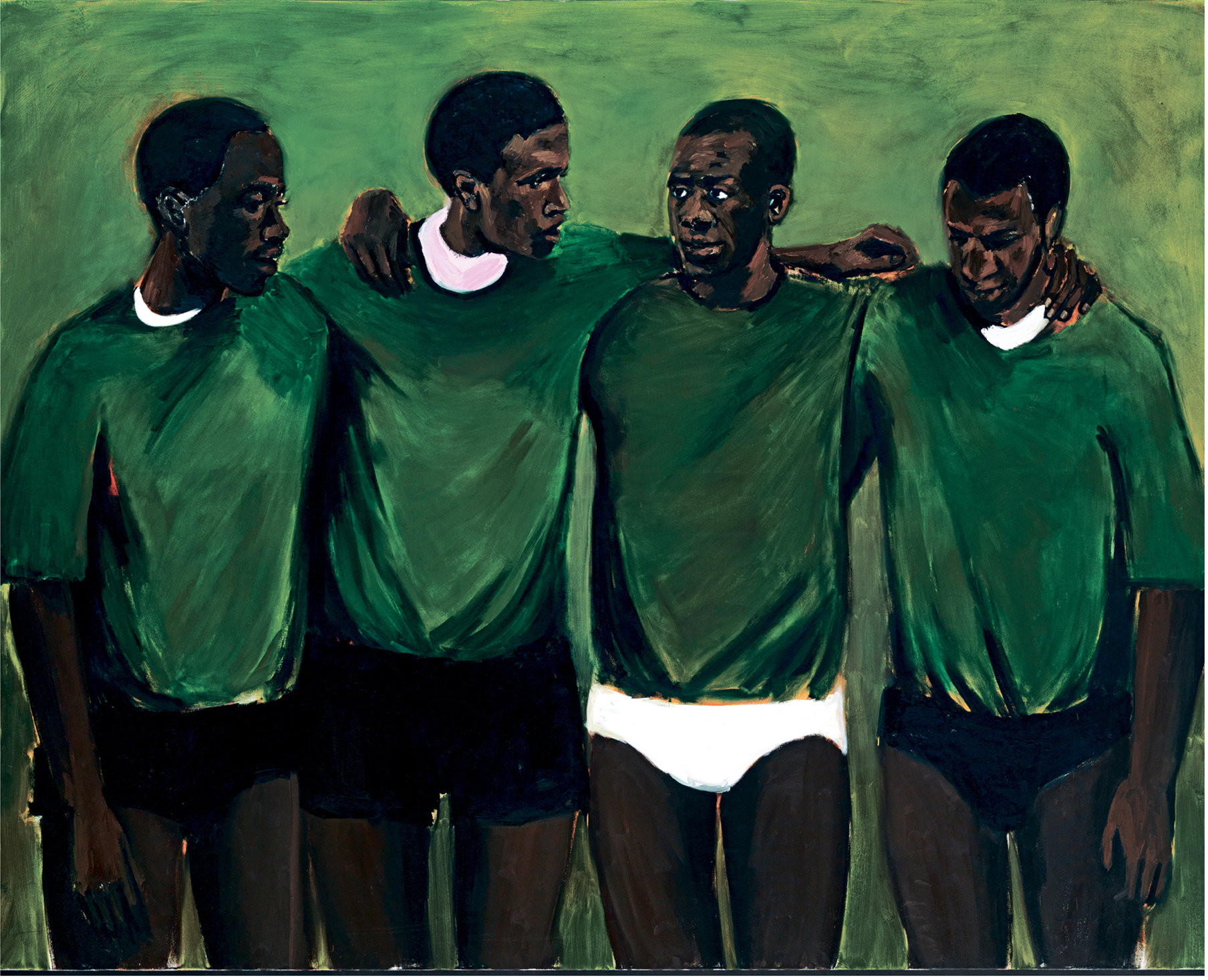 For our latest line-up of exceptional artists to watch, let’s cast a light on five women artists whose unique visual language gained critical international acclaim as well as institutional recognition these last two decades. Each artist developed new modes of creative expression, unsusceptible to limited classification, oscillating between the identifiable and indefinable, and all share the desire to convey the complexities of the human experience.

A beguiling sense of intimacy, elegance and subtlety pervades Lynette Yiadom-Boakye’s paintings. Rendered in loose and descriptive brushstrokes, the ambiguous and mysterious characters she depicts stem from her sheer imagination. They never provide an explicit narrative nor abide to a specific storytelling role. Historically transcendent, each possesses open-ended qualities and lure the viewer both mentally and physically. Most common in her paintings are the averted and diverted gazes of her characters who rarely meet the viewer’s, their vague identities leaving space for suggestion and speculation. Lynette Yiadom-Boakye's works are coupled with poetic and elusive titles that give no indication as to what is taking place on the canvas. The artist has named Yan-Pei Ming as an influence in her approach to portraiture through his elimination of its traditional function as a topological identification, his removal of time and space signs, thus rendering impossible such an identification in the display of elements; and offering instead a clear space for interpretation. The painter and author, who studied at the Royal Academy of Arts, was the first black woman to be nominated for the prestigious Turner Prize in 2013. She showed nine commissioned works at the Venice Biennale in the critically acclaimed Ghana pavilion at the Venice Biennale in 2019, and this month Tate Britain is set to present the first major retrospective of her work, bringing together around 80 paintings and works on paper spanning almost two decades. Lynette Yiadom-Boakye’s artworks are part of numerous institutional collections including the Tate Collection, London; the Victoria and Albert Museum, London; and the Museum of Modern Art (MoMA) in New-York City.

In her cinematic collage paintings on paper, MacArthur Genius Grant winner Njideka Akunyili-Crosby recreates the quiet pleasures of domestic life and invites the viewer into her deeply personal universe. Akunyili-Crosby was born in 1983 in Nigeria where she lived until she left to study visual arts in America in 1999. Her work is a fusion of references and layers that are profoundly imbued with her experiences which parallel her identity as a Nigerian-American woman.  She draws on historical approaches to painting, while still infusing her canvases with her own cultural and traditional background: Her work conflates and overlaps various techniques which metaphorically refer to the manifold layering which constitutes her own identity. The artist uses paint, pencil, collage and Xerox transfer techniques to render interior spaces. The backgrounds in her latest series, ‘The Predecessors’, are concurrently based on Dutch artist Hammershoi’s paintings inspired by his domestic life, the limited palette and rectangular shapes of American artist Josef Albers, and the vibrant colour palette of Peter Halley with whom the artist studied. Equally inspired by writers from Africa, Akunyili-Crosby cites Nigerian authors Chinua Achebe and Chimamanda Ngozi Adichie, or Kenyan writer Ngũgĩ wa Thiong'o as influential in her approach to painting by their use of writing as a medium to tell and expand on inherited traditions. Njideka Akunyili Crosby is the recipient of several notable awards: The MacArthur Fellowship in 2017 and the Financial Times' Women of the Year’ in 2016; she also made the ‘Future Generation Art Prize’ 2017 Shortlist. Her work is featured in the major museum collections including The Tate, London, Zeitz MOCAA, Cape Town; LACMA, Los Angeles,; the MOMA,New-York; and the Whitney Museum of American Art.

At just 27, Jadé Fadojutimi is the youngest artist to be ever collected by the Tate. Fadojutimi’s vibrant paintings in oil pastel toe the line between figuration and total abstraction. The artist holds a BA from the Slade School of Fine Art and an MA from the Royal College of Art. Her work is a merging of influences ranging from Japanese anime, berber textiles, fashion, and objects that constitute her everyday life. Jesture, her latest series of paintings exhibited at Pippy Houldsworth Gallery in London, were executed during quarantine. Fadojutimi used this time of seclusion to fully immerse herself into her art and thoroughly imbricate her life, feelings and experiences of isolation into her work. At first glance, her compositions seem abstract, but one soon recognizes the energy of figures, pronounced floral motifs and eclectic swatches of fabric that are recurrent in her paintings.  In a conversation with Talkart following her show at Pippy Houldsworth gallery, the artist mentioned how she frequently bought flowers for herself during quarantine in order to cope with the times. The floral arrangements on her table would consequently share the same colour palette as her artworks. Jadé Fadojutimi will be participating in the 2021 Liverpool Biennial, and will present a solo show at the Institute of Contemporary Art, Miami later in the year.

Mehretu’s celebrated large, gestural and bold monumental abstract geographies are imbued with tension and dynamism. Initially, her works look completely abstract but as you come closer to her paintings, elements of time, place and history start to appear. Julie Mehretu combines architectural structures into her compositions which are deeply informed by the radical shifts in her life. Mehretu’s family left Ethiopia for America in the 1970s after the Derg military regime overthrew Emperor Haile Selassie. She grew up in Michigan then studied at the Université Cheikh Anta Diop in Dakar, Senegal. She went on to earn her MFA in painting from the Rhode Island School of Design in Providence, USA. The artist fuses abstract and figurative elements to break with a singular structure and combines architectural views, street plans into unified compositions. There are various reading levels to Mehretu’s work, of feeling and engaging with the whole picture, rather than one single perspective, her works seem to inhabit multiple dimensions. Looking at the artist’s paintings, one notices a confluence of symbols that appear as a flux, a cartography that mirrors her trajectory in life. She states that her work pertains to an in-between dimension where spatial, geographical and psychological elements informed by her life come together. Julie Mehretu is the recipient of numerous awards including the Whitney’s American Art Award and a MacArthur Foundation Fellowship. Mehretu’s work has been exhibited worldwide, including in solo shows at the Guggenheim Museum, New York (accompanied by an exhibition catalogue); Deutsche Guggenheim Museum, Berlin; and Detroit Institute of Arts, Detroit. Her art is also in the permanent collections of the following institutions: The Museum of Modern Art, New York; San Francisco Museum of Modern Art, San Francisco; Whitney Museum of American Art, New York; and the National Gallery of Art, Washington DC, among others.

“I’m looking for that in-between state in an individual where the overarching definition is lost”. -Toyin Ojih Odutola

Shortlisted for the Appollo Artist of the Year Award, Toyin Ojih Odutola is best known for her intricate luminous drawings which delve into fascinating visual storytelling. Ojih Odutola was born in Nigeria in 1985 until her family moved to America in 1990, where she now lives and works in New-York City.  Through her use of coloured pencil, graphite and ink, she explores the multifarious textures of the scenes and characters she draws.  Her critically acclaimed exhibition ‘A Counterveiling Theory’ this summer at the Barbican Centre in London featured forty drawings involving an ancient civilization set in the Plateau state of central Nigeria. Ojih Odutola’s family played a crucial role in her choice of themes as she grew up in a family where oratory and storytelling were an important part of her Nigerian culture. More recently, Toyin Ojih Odutola presented an intimate virtual show ‘Tell Me a Story I don’t Care if it’s True’ at Jack Shainman gallery in New-York, comprised of free-flowing diptych drawings paired with written vignettes that the artist developed during quarantine. The exhibition title echoes the physical state in which the artist found herself, yearning for sense and certainty in a confusing and alarming world state. Despite being associated, these text works and drawings each stand on their own, their meaning taking diverse significations depending on the viewer’s own narrative, imagination or projections. Odutola’s works have been exhibited and can be found in the collections of the Museum of Modern Art, New York; the Whitney Museum of American Art, New York; The Studio Museum in Harlem, New York; the Institute of Contemporary Art, Boston; The Art Institute of Chicago; Princeton University Art Museum; and the Smithsonian National Museum of African Art, Washington, D.C., amongst others.