ART OUTSIDE OF THE BEDROOM: ROBERT MAPPLETHORPE AND FÉLIX GONZÁLEZ-TORRES 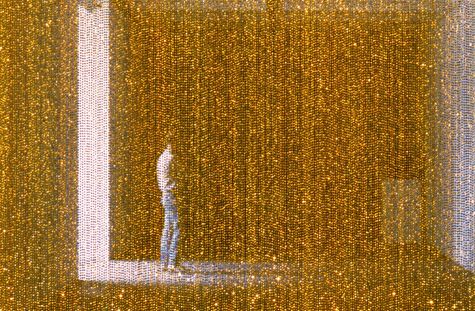 Robert Mapplethorpe and Félix González-Torres represent two key figures in the development of contemporary art for making society question the way in which we understand human relationships by taking their private live outside of the bedroom and placing it at the centre of the public eye. Throughout their careers both artists got involved in social and political causes as openly gay men, addressing the beauty, but also the challenges that the gay community experienced during two very eventful decades, between the 1970s and the 1980s. By making their private live and sexual inclinations the main subject of their work, they played a central role in legitimising homosexuality and inspiring cultural activism.

As for their personae, Robert Mapplethorpe was pretty much a good boy harbouring bad boy fantasies and his sophisticated black and white photographs are intentionally provocative; while, González-Torres seemed to be the perfect model for the culture wars of sex and diversity, as he continuously referred to his partner in his works in a more naïve manner than Mapplethorpe. Despite the differences, both artists’ work claimed its place among the art resistance of its time, expressing the urgency of acceptance and inclusivity of their community amongst society.

Although their work doesn’t relate in form, both artists added an essential layer of physicality to their art, touching on common themes natural to all human beings, such as desire and love. Through his photographs, Robert Mapplethorpe caught on camera his urge and fascination with the physical form of the male body. On the other hand, González-Torres conceptual project remained interested in engaging the viewer in a physical as well as in an intellectual manner in order to establish meaning in his pieces, which reflected on the theme of love.

Gay or straight, desire and love are two fundamental feelings that we all are bound to experience in live through our physicality. By touching on these themes, Mapplethorpe and González-Torres generated a much-needed empathy from their audience and successfully brought society closer to the gay community through their bold and brave artistic projects.

Mapplethorpe became famous in the 1970s for his male nudes and sexually explicit imagery. Because his photos tested the boundaries of creative freedom, his work now withholds a significant place in the history of artistic struggle to truthfully portray the world.

As Mapplethorpe used to photograph his friends, who were influential figures, his pictures were often described as the documentary portrayals of the cultures of the time, exposing its free-spirited nature, known for its sexual mores. In the 1970s, Mapplethorpe became interested in documenting his friends in the New York’s homoerotic and S&M underground scene, often portraying his sitters nude and involved in sexual acts. Although his photographs were considered quite socially challenging at the time, the photographer did not think of his art as political, but rather as a research for beauty.

Mapplethorpe saw perfection in the physical form, while also posing questions around identity, representation of gender and individuality. Often, his work is associated with Greek sculptures as he followed the same symmetry and geometry used by the ancient masters. In fact, in 2009, his photographs were shown alongside Renaissance masterpieces at the Galleria dell ’Accademia in Florence.

As subjects, the artist preferred the male figure, more specifically athletic and black men, including models, dancers and bodybuilders; some of his sitters included, Ken Moddy and Derrick Cross. In 1986, Mapplethorpe published the Black Book which included pictures of fragmented bodies, such as an arm or the torso. Describing his technique, Mapplethorpe said ‘I zero in on the body part that I consider the most perfect in that particular model.’

Although form was the main artistic concern of the artist, he was a master in creating daring images. Mapplethorpe’s ability in generating a dialogue between his photographs and an era of sexual liberation lied in the aesthetics and politics of framing.

For example, in Brian Ridley and Lyle Heeter (1979), a homosexual couple is depicted in leather outfits and bondage equipment while sitting in a living room, which seemed to belong to a very conservative setting. The contrast created between these two elements generated a provocative image, through which Mapplethorpe unveiled the truth that extreme desires are often part of the everyday.

Mapplethorpe usage of strong imagery, such as male nudes and sadomasochism, placed his work in the centre of the debate around self-expression and censorship in the arts. For Mapplethorpe, it was about being able to express one’s true self and the many layers of an individual’s personality. Coming from a Catholic family, Mapplethorpe used photography as a way to deal with his sense of guilt for being homosexual, but also as a way to question the authority of the Church. In his Self Portrait (1983), Mapplethorpe addressed his ‘sinful’ behaviour by posing as a rebellious soldier in front of a black star, symbol of the devil.

Mapplethorpe’s shocking imagery and homosexual subjects granted him a place in the culture wars, which took place between the1980s and the 1990s. During this time, members of the conservative religious group criticised artists for their blasphemous work, while other prominent figures in the arts and popular culture defended freedom of expression. Members of the latter group included Martin Scorsese, Madonna and Andres Serrano.

When Félix González-Torres started getting recognition in the art world, he was already openly gay, and his homosexuality was seen as an influential aspect in his artistic work. In 1987, the Cuban-American artist joined the Group material, a New York-based group whose intentions were to work collaboratively towards cultural activism and community education.

Treating similar topics to Mapplethorpe, González-Torres became known for his minimal often-interactive installations. Although his art presents itself in a more playful manner compared to Mapplethorpe’s, it deals with darker themes. In fact, while Mapplethorpe’s photography was much more concerned with portraying the homosexual community, and bringing to light the underground life of the New York scene, González-Torres was more interested in discussing themes of love and loss, and the obstacles that his community had to overcome.

The artist created various works that touched on the AIDS pandemic of the 1980s, which involved himself personally as well as people who were incredibly closed to him. In 1991, after his partner Ross Laycock passed away, González-Torres created the work “Untitled”, a series of billboards showing black and white pictures of the artist’s empty bed, trying to raise consciousness on the illness that at the beginning was thought to affect only homosexuals. Another important work by the artist, which helped him draw the attention to the then unknown history of the gay community, is a series of billboards produced in 1989 showing a black page with white typing tracing a non-linear chronology of significant events in the history of the gay-rights movement.

In his installations, González-Torres used extremely curious materials; lightbulbs fade away, candles burn out and dispersed candies are eaten by the public. These materials enabled González-Torres to address the topic of existentialism. On one hand the material’s dispersion represents the passing of time and the process of dying. On the other, they represent a possibility of regeneration.

Creating works with multiple meanings was a common practice for this artist. For example, one reading for the work “Untitled” (portrait of Ross in L.A), represented the attention the artist drew to the senses, involving sight, touching and taste, evoking the earthly pleasures the audience experience in their normal life. While, another reading, referred to the dissolution of the gay community as a result of the AIDS pandemic; a person eating a candy and throwing it away criticised society for ignoring the existence of the illness.

Even if in extremely different ways, these two artists successfully pushed the barriers of their time and successfully told the story of their community, which eventually resulted in the gradual acceptance of homosexual relationships within society. On that light, both Robert Mapplethrope and Félix González-Torres created two of the boldest and bravest artistic projects of the 20th-century. Their messages were heard and a continuity of sorts was found, the moral universe gaped open and inclusivity followed.