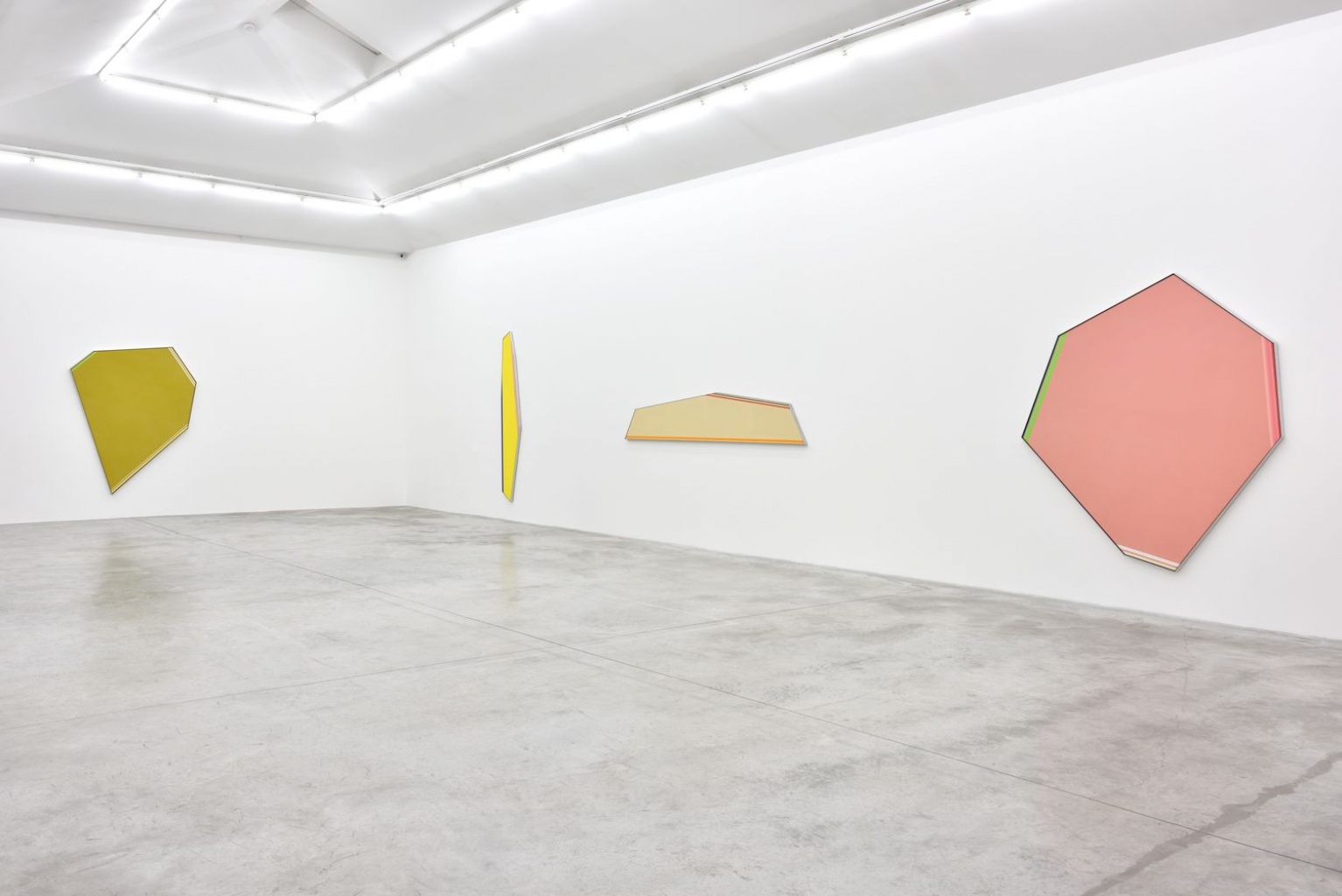 ‘No single issue has been as continuously fundamental to the development of modernist painting as the need to acknowledge the literal character of picture-support.’ – Michael Fried (b. 1939) from ‘Shape as Form: Frank Stella’s New Paintings.

The 20th century saw a proliferation of radical and revolutionary ideas, stretching the boundaries of what was considered as art and recasting previous conceptions and values. Traditionally, the medium of painting has most commonly been reserved for the rectangular canvas because this was the easiest shape to stretch over a wooden frame. Furthermore, the shape supported the illusion of glancing into another world or through a window, fitting with the favourable subject matter of truth to reality in the history of western art.

In the nineteenth and early twentieth century developments in painting took place in the form of new subject matter, new ways of using colour and new styles of brushwork. This was most notable through the Realist and Impressionist movements in France where artists challenged the confines of what had previously been regarded as high and low art through who and what they chose to depict. Nearing the mid-twentieth century, America witnessed what was arguably the most drastic broadening of painting and sculptures’ horizons in recent art history. Coinciding with the politics of the Cold War (1950-1959) and the anxieties this triggered in American politics was the emergence of Abstract Expression.

Striving away from imagery, this reduced drawing to its simplest action: the artist’s gesture on the surface and the placement of colour independently from line and figuration. Leading on from this were the developments of Minimalism and Conceptualism which focused further on exposing the bare bones of artistic matter. The movement was propelled by leading modernist art critic, Clement Greenberg (1909-1994) whose writing defined the importance of the purity of painting which could only be elaborated upon by experimenting with its limitations. This was the rectangular shape supporting it, the properties of the pigment and the flat surface. Art at this time was no longer concerned with the status of the subject matter and instead looked at revealing the philosophical meaning behind the practise itself in its deepest form. This form did not try and shroud itself in the disguise of mimicking other objects and instead was focused purely on the gesture it was itself.

Two of the most central figures in the early exploration of the shaped canvases possibilities were Frank Stella and Kenneth Noland. Art critic Michael Fried said that the new shaped canvases used in the 1960s by both Noland and Stella neutralized the flatness of the picture support through the optical illusion created by the foreign pigments placed upon the pictorial structure. This brought to light each element of the picture from the placement of colour on the canvas to the flatness of the support. Fried said it was Noland’s “deep and impassioned commitment to making colour yield painting that has compelled him to discover structures in which the shape of the support is acknowledged lucidly and explicitly enough to compel conviction.” His concentric circles were pivotal to the development of geometric abstraction and colour theory. This interest in colour and abstraction began during his studies at Black Mountain College. Founded in 1933, the liberal arts college promoted an experimental and interdisciplinary approach taught by Josef Albers who had moved to America following the closure of the Bauhaus school in Germany concurrent with Hitler’s rise to power. The Bauhaus’s philosophy stemmed from the need to bring art back into contact with everyday experience with an emphasis on technique and technical process, breaking down what constituted as high art and producing functional and aesthetically pleasing objects. The influence of the Bauhaus’s philosophy in America was immense. This can largely be seen in the development towards the shaped canvas with artists such as László Moholy-Nagy (1895-1949) whose placement of geometric shapes and bands of colour anticipated the rejection of the flat rectangular canvas in the 1920s.

Conceptual artist Sol LeWitt (1928-2007) believed that materials should be secondary to ideas and thus further extended the surfaces meaning in painting. In ‘Paragraphs on Conceptual Art’ he stated there was a danger of making the physicality of the material the concept or expression of the work. “Conceptual art is made to engage the mind of the viewer rather than his eye or emotions.” Therefore, any physicality of a work which triggers the viewers emotion is redundant in establishing art as a concept. In 1968 he began formulating detailed instructions for the execution of his wall paintings. The perfunctory idea challenged the importance of the artists physical gesture in a new movement that turned towards the idea that machinery could create art. His visually enchanting geometric drawings were the result of rigorous instruction and meticulously detailed diagrams for assistants to follow. The impermeability of the wall drawings undermine the notion of art as an object which can be acquired, owned and conserved. LeWitt’s wall murals defied the art logic of a singular object as the location of artistic invention in his developed patterns was situated in the written instruction opposed to on the picture support.

Another artist to challenge the preoccupations of the canvas was Ron Gorchov (1930 – 2020). His oil-on-linen paintings feature biomorphic shapes on vividly coloured backgrounds. The stretcher is concave, forming a saddle-like shape and bridging the gap between sculpture and abstract painting. The critic Robert Morgan said this curved shape shares more similarities to the human perspective than a hardened rectangle. Gorchov believed this to be “a more intentional form that would create a new kind of visual space.” His primal style of painting upon canvases which curved away from the wall played on human perception to challenge the flat rectangular plane usually reserved for the wall which as Donald Judd said, “determines and limits the arrangement of whatever is on or inside of it.”

What Noland, LeWitt and Gorchov had in common was that they all turned to alternative picture planes in an attempt to focus on the inherent qualities within the medium they were working. This liberated art from the constraints imposed upon the medium of painting by societal values and hierarchies.