5 MONUMENTAL ANTONY GORMLEY SCULPTURES AND WHERE TO FIND THEM 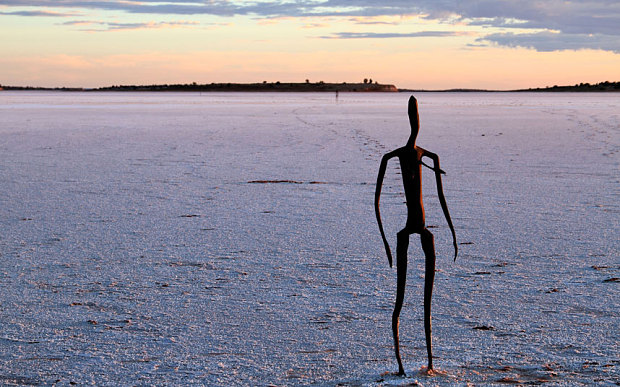 The Turner Prize-winning artist Sir Antony Gormley has become synonymous with British contemporary sculpture inciting a regeneration of interest in the human form on both intimate and monumental scales. His work is concerned with the space we inhabit within and without our bodies, making us question not only how we perceive sculpture, but also how we perceive our own bodies and the spaces we occupy. Indeed, Gormley describes his work as ‘an attempt to materialise the place at the other side of appearance where we all live.’ In this way, he attempts to treat the body not as a thing but a place to identify a condition common to all human beings. To further emphasise on this idea, the British sculptor has a tendency to place his sculptures around the world in site-specific locations, as for him, the location of the piece is as important as the piece itself.

Inside Australia, 2003 is installed on the western end of Lake Ballard in Western Australia, consisting of 51 life-size in height human figures positioned about 750 metres apart. The horizon is flat for most of its 360 degrees, and there is an iron stone mound 120 feet high that allows a vantage point from where you can see the entire installation. As people move across the work, they leave a tracery or drawing of connecting lines between the works across the sharp whiteness of the lake. This is a sign of the viewers' participation in the work which changes, as does the sky, throughout each interval of the year.

“The works are like tuning forks which allow one to see an implicit attitude that is normally hidden by the accidents of appearance. The core set of the body is revealed; a concentration in mass of the darkness of the body. I  was trying to achieve the highest level of tension between mass and space with highly concentrated and individualised body forms distributed sparsely across this chemical surface.”- Antony Gormley

Angel of the North

Built in 1998, the Angel of the North is a majestic, giant figure of an angel placed in Gateshead, near the A1, the road connecting London with Edinburgh. Dominating the skyline, this 20-metre tall sculpture has become as much a part of Gateshead's identity as the Statue of Liberty is to New York. Since it first spread its wings in February 1998, it has become one of the most talked about and recognisable pieces of public art ever produced. According to Gormley, the significance of an angel was three-fold: first, to signify that beneath the site of its construction, coal miners worked for two centuries; second, to grasp the transition from an industrial to an information age, and third, to serve as a focus for our evolving hopes and fears.

Taking over the landscape at 25 meter high, Antony Gormley’s Exposure, 2010 sculpture is rooted to ground in central Netherlands, reacting over time to the changing environment. Gormley placed his isolated squatting figure on a thin piece of land between the Dutch town of Lelystad and the sea. With time, as the water levels rise, the sculpture will gradually be buried in water.

“My concept of how sculpture works in the landscape is that it is a still point in a moving world. The whole idea of Exposure is that this work, made at a particular time, rooted to ground, reacts over time to the changing environment. One of the known environmental changes that is currently happening is the rising of the sea level through global warming. It is critical to me that at the time of its making, this work reacts with the viewer, the walking viewer on the top of the polder, and that the surface that the viewer stands on is the surface that the work stands on. The work cannot have a plinth. Over time, should the rising of the sea level mean that there has to be a rising of the dike, there should be a progressive burying of the work.” - Antony Gormley

This mysterious life-size statue of a man contemplating the water held in his cupped hands is actually a plaster cast of the artist’s own body, placed in the Winchester Cathedral crypt, which floods during rainy months, in fact, this silent sentry in the crypt below the large Gothic cathedral is often knee-deep in water.

‘How do you make memory? What is the relationship between memory and anticipation? Can you make something that is physical which at the same time evokes the process of remembering? Is it possible to do this and make something fresh, like dew or frost – something that just is, as if its form had always been like this.’ -Antony Gormley, Thoughts on Domain Field

The installation of the sculpture was part of an effort by the cathedral to introduce contemporary art into the Gothic masterpiece. Know before you go, Winchester is 70 miles southwest of London, near Southampton. The Cathedral is open every day of the year.

Another Place, 1997 is located at Crosby Beach in Liverpool, England. The installation consists of 100 cast iron figures facing towards the sea. The figures are modelled on the artist's own naked body. Each and every sculpture faces out towards the horizon. The installation stretches over three kilometres of the shore and as far as one kilometre out to sea. Depending on the tide, the figures are more or less visible. At times water reaches up tot heir necks. This piece is another example of the artist’s dialogue with landscape and time.

“The sculptures are all standing in a similar way, with the lungs more or less inflated and their postures carrying different degrees of tension or relaxation. The idea was to test time and tide, stillness and movement, and somehow engage with the daily life of the beach. This was no exercise in romantic escapism. The estuary of the Elbe can take up to 500 ships a day and the horizon was often busy with large container ships.” -Antony Gormley