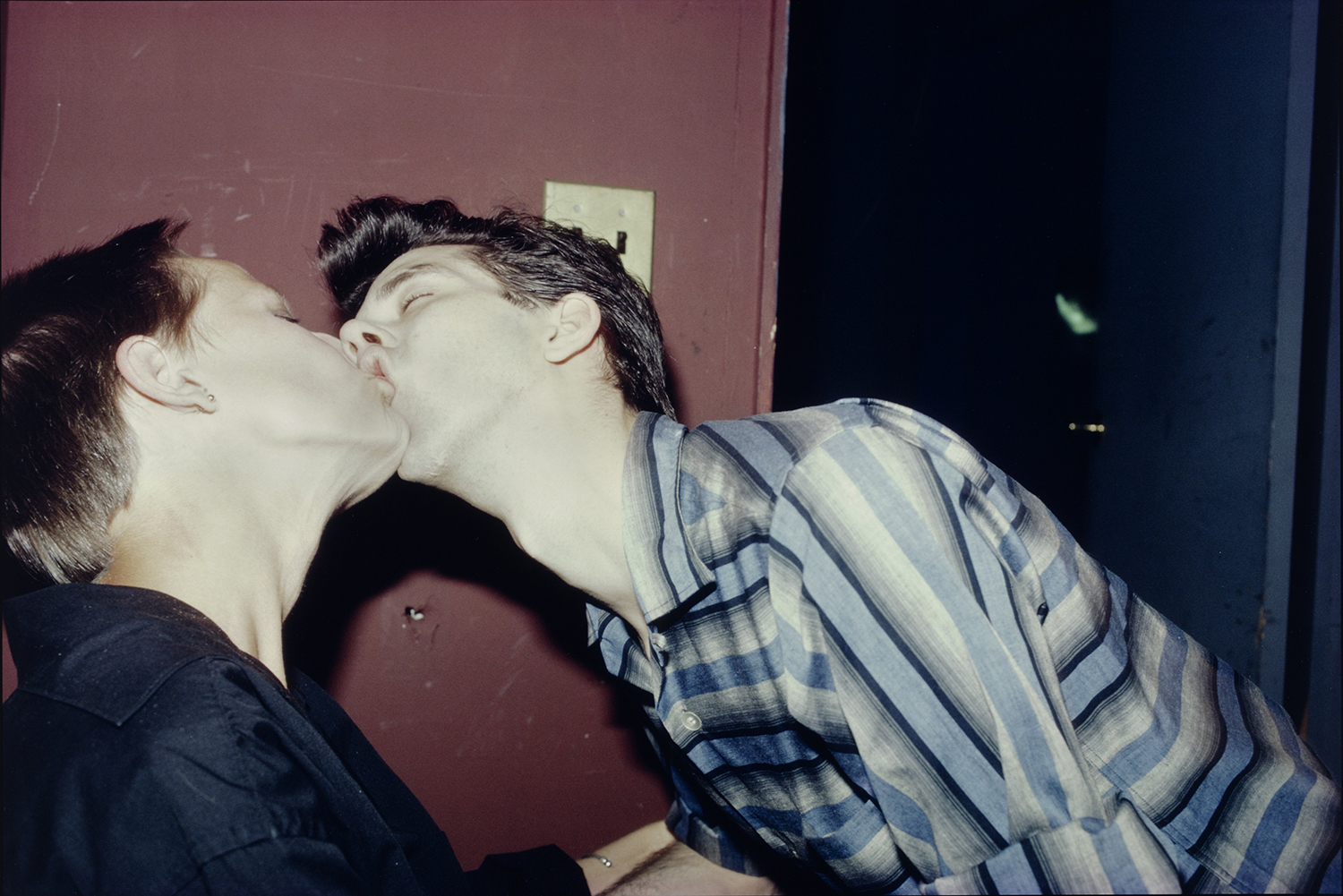 For our latest list of exceptional artists to watch, we shine a light on our five favourite contemporary artists exploring queer love in all its different manifestations: from romantic love and desire, to self-love or the love that bonds us together in friendship, family and community. These artists serve a critical role for both the queer community and society at large, providing points of reference, identification and inspiration whilst fighting for a better future, advocating for inclusion and equal rights.

Nan Goldin is an American photographer known for her deeply personal and candid portraiture. Goldin’s intimate images act as a visual autobiography documenting herself and those closest to her, especially in the LGBTQ community and the drug-addicted subculture. Her most notable work, The Ballad of Sexual Dependency (1980–1986) is a 40-minute slideshow of 700 photographs set to music that chronicled her life in New York during the 1980s. The Ballad was first exhibited at the 1985 Whitney Biennial, and was made into a photobook the following year.

“For me it is not a detachment to take a picture. It's a way of touching somebody—it's a caress,” she said of the medium. “I think that you can actually give people access to their own soul.” -Nan Goldin

Born in 1953 in Washington, the artist began taking photographs as a teenager to cherish her relationships with those she photographed, as well as a political tool to inform the public of issues that were important to her, capturing herself and her friends at their most vulnerable moments, as seen in her seminal photobook Nan Goldin: I’ll Be Your Mirror (1996).

The artist currently lives and works between New York, NY, and Paris, France. Today, Goldin’s works are held in the collections of The Museum of Modern Art in New York, the Tate Modern in London, the Museum of Contemporary Art in Los Angeles, and the Centre Georges Pompidou in Paris, among others.

Working from the heart and driven by the body, Nicole Eisenman explores the human condition in her paintings, drawings and mixed-media artworks. Influenced by Expressionism, Impressionism, and Pablo Picasso, Eisenman populates her works with emotionally resonant, cartoonish figures, formed out of exaggerated, painterly lines and intense colours. Full of pathos and dark humour, they are expressionistic portraits of herself and her friends, or imagined characters based on her critical observations of contemporary life and culture. Whether carousing at a beer garden or lounging dreamily, in groups or alone, Eisenman’s figures seem isolated and contemplative—products of our time, reflections of ourselves.

“I reflect a certain desire in my work, I want my work to be authentic and reflective of my body, what it’s interested in. The work is nothing if not feeling-based.” -Nicole Eisenman

Eisenman’s father is a Freudian psychiatrist and she grew up listening to him interpret dreams. This is quite evident in the surreal nature of her work. Eisenman has flirted with a variety of styles but her paintings have remained grounded in her personality and vision. A lesbian herself, Eisenman rose to prominence in the mid 90s by combining the absurd with the banal and imbuing quotidian scenes with socio-political importance. Her work has been described as witty, satirical, and overtly queer.

In the course of a thirty-year career, the American photographer Catherine Opie has made a study of the freeways of Los Angeles, lesbian families, surfers, Tea Party gatherings, America’s national parks and the houses of Beverly Hills. Often politically charged, her photographs feature a central figure occupying a flattened space, highlighting her subject’s inner life through the removal of external detail. Throughout her practice, Opie investigates queer culture and personal history, creating work that is often autobiographical and informed by her experiences as a lesbian woman.

But her most famous photographs are probably two that she took of herself, early in her working life. In “Self-Portrait/Cutting,” which Opie made in 1993, when she was thirty-two years old, she stands shirtless with her back to the camera in front of an emerald-green tapestry, which offsets her pale skin and the rivulets of blood emerging from an image carved into her back with a scalpel: a childlike scene of a house, a cloud, and a pair of smiling, skirt-wearing stick figures. In “Self-Portrait/Pervert,” made the following year, Opie is faceless and topless and bleeding again: she sits in front of a black-and-gold brocade with her hands folded in her lap, her head sealed in an ominous black leather hood, the word “pervert” carved in oozing, ornate letters across her chest.

In describing her iconic self-portrait, she explained:

“I made the piece out of a reaction to all of the sudden gays and lesbians’ bringing on the ‘normal’ dialogue to us,” and wanted to “push the boundaries a little bit here about what you guys think normal is.” -Catherine Opie

Louis Fratino is celebrated for his deeply personal paintings, which draw upon the artist’s intimate experiences, memories, and fantasies to portray the everyday lives of gay men in New York City. “I paint people I love, and I paint using the vocabulary of paintings I love,” Fratino explains. “So the influence is very straightforward; if I see a painting that sets me on fire, I want to try and make something that feels like that.” Whether capturing erotic scenes of lovers embracing in bed or subway passengers peering at their reflections, Fratino embues his contemporary subject matter with references to art history. His paintings often embody the visual style of early 20th century modernists like Pablo Picasso, Fernand Léger, and Henri Matisse.

“I paint people I love, and I paint using the vocabulary of paintings I love” -Louis Fratino

Wolfgang Tillmans is an influential contemporary German artist. Emerging in the 1990s with his snapshot documentations of youths, clubs, and LGBTQ culture, Tillman’s practice has expanded to include diaristic photography, large-scale abstraction, and commissioned magazine work.

“I want the pictures to be working in both directions, I accept that they speak about me, and yet at the same time, I want and expect them to function in terms of the viewer and their experience.” -Wolfgang Tillmans

Wolfgang Tillmans made his name documenting gay culture in London and Berlin. Born in Germany in 1968 and dividing his time between there and London, Tillmans provokes a sense of belonging in many gay men of a certain generation. The images of a form of post-Berlin Wall freedom – Love Parade, cheap rent, Easyjet, circuit parties, Europe – were all representations of a life that was an escape from the North. At times when masculinity was still shaped by the Gallagher brothers and Manchester United, Tillmans offered a sensual representation of a forbidden gay toughness. Though still largely white and macho, such representations stood out from most of the images of maleness of those times. And what’s more, they came from a gay scene that actually existed somewhere.