10 Figurative Painters On Our Radar 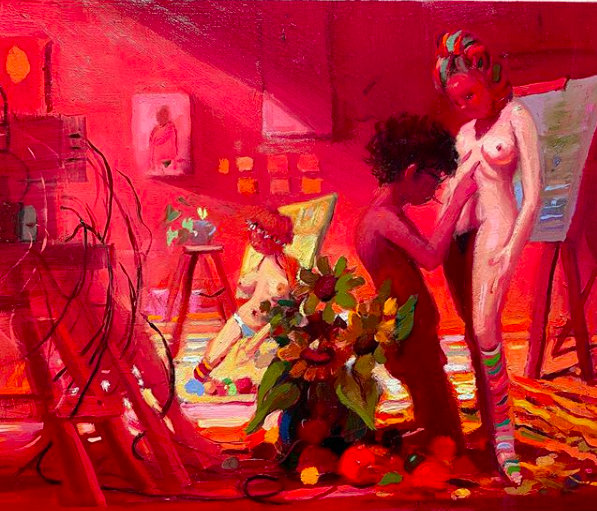 Swiss-born artist Nicolas Party works across a wide range of different media. Primarily known for his colour-saturated paintings and murals, he also makes painted sculptures, pastels, installations, prints and drawings, and works as a curator. Party often paints portraits and still lifes of everyday objects, which he strips of all extraneous detail. Rather than creating faithful depictions from nature, he uses these seemingly innocuous subjects as springboards for an exploration into the art of painting itself. His concerns lie, therefore, less in the accurate depiction of nature, and more in its translation and transformation through colour, materials and composition. Painterly precision, a vibrant colour palette and a keen eye for composition coalesce into works that are accessible and seductive but, at the same time, continue a long standing art-historical dialogue between observation and the imagination. Party is also interested in the power of paint to alter our perception of the built environment and, within a gallery context, how we experience art.

Peter Uka (Nigerian, born 1975), is based in Germany, where he completed his studies in 2017 as a Meisterschüler (Master Student) under artists such as Tal R and Eberhard Havekost. At the Kunstakademie in Düsseldorf Uka honed his practice of painting realistically with little reliance on photographs, and interim began to introduce abstraction and figuration into his work. Impeccable in detail, the figures therein exude a veritable self-confidence, irrespective of social demarcations. The mix of compositions capture the international reach of trends from the late 20th century and the ways in which ideas of “home” are enmeshed. Together, these narratives uncover historical precedents of globalization and dynamic cultural signifiers connecting two countries that Uka calls home, while reminding the rest of the world of collective reciprocity, closeness, and connection.

Daniel Richter is a German artist known for his large-scale paintings inspired by mass media and contemporary culture. Borrowing themes from both Christianity and German history, Richter constructs his contemporary scene with theatrical flair: his figures are staged in Baroque composition, their outlandish costumes and mask-like faces lend an element of surreal spectacle. The fervent emotion of grand drama is carried through Richter’s frenetic style of painting: thick brushwork battles with translucent drizzles and impassioned smears; acid tones are electrified against the sombre ground. Reminiscent of Ensor’s nightmarish crowds, Richter infuses this street scene with apocalyptic celebration.

Somaya Critchlow is a British artist whose figurative paintings of women explore facets of race, sex and culture through an instinctive, stream-of-consciousness process of image making. Working mostly on a small scale, her works depict bold, curvaceous and self-possessed female characters, of her own creation, that simultaneously combine and subvert the culture expectations of race, gender and power in the history of portraiture. Imbued with dark, rich hues of browns, Payne’s grey and purples, and using sensuous brushstrokes, her heroines emerge starkly against atmospheric backdrops of thinned oils evocative of classical European painting – Velázquez, Rubens et al – and David Lynch’s hazy, seedy environs. They are self-reflective and personal, and at the same time commentary of the cultural, class and political dynamics of contemporary society.

For more than thirty years, Lisa Yuskavage's (b. 1962) highly original approach to figurative painting has challenged conventional understandings of the genre and influenced subsequent generations of artists. Her simultaneously bold, eccentric, exhibitionist, and introspective characters assume dual roles of subject and object, complicating the position of viewership. At times playful and harmonious, and at other times rueful and conflicted, these characters are cast within fantastical compositions in which realistic and abstract elements coexist and color determines meaning. While the artist's painterly techniques evoke art historical precedents, her motifs are often inspired by popular culture, creating an underlying dichotomy between high and low and, by implication, sacred and profane, harmony and dissonance.

Paul P. is contemporary Canadian artist known for his drawings and paintings of young men. Influenced by the works of John Singer Sargent and James Abbott McNeill Whistler, the artist depicts his subjects—whose images are culled from 1970s gay pornography as well as his own snapshots—with a delicate reverence. “The figures in my work—anonymous and interchangeable—are caught in the moment of change, when they are successfully removed from their context, freed from degradation,” he said of his work. “I am searching for analogies and the touching of hands between the past and the present.”

In Aks Misyuta's work, the mise-en-scène against the background of distances is a reference to the old tradition of painting. Being hastily painted, they are the reflection of the past in the steamy mirror of the day: the details have been less of an issue in the world, which has gained pace. On their halfway to abstraction, they have still been narrative. This is where the pop culture, with its cartoon motives, sits side by side with the foretime allegories, somewhat like the red cherubs. The metaphoric pictures of our blurred interactions and self-cognition.

Lynette Yiadom-Boakye’s oil paintings focus on fictional figures that exist outside of specific times and places. Her paintings are rooted in traditional formal considerations such as line, color, and scale, and can be self-reflexive about the medium itself, but the subjects and the way in which the paint is handled is decidedly contemporary. Her predominantly black cast of characters often attracts attention, her work has contributed to the renaissance in painting the black figure.

The practice of Paula Kamps explores mediums peripheral to painting; it focuses mainly on a technique halfway between watercolour and drawing, emphasising the brilliance and intensity of color offered by these processes. Her work, between figuration and abstraction, gives pride of place to large flat areas – «stains» as Andre Butzer says – which, skillfully spread over the canvas, reveal human figures, scenes of daily life, always fragmented. With figures often hazy or obscured and a recurring, but arcane symbology, Kamps’ work’s elegantly hint on subjects persistent throughout art history – the unreliability of memory, the evasiveness of meaning, and our continual desire to understand one another.

Working from the heart and driven by the body, Nicole Eisenman explores the human condition in her critically acclaimed, wide-ranging prints, paintings, drawings, and mixed-media works. As she explains: “I reflect a certain desire in my work, I want my work to be authentic and reflective of my body, what it’s interested in. The work is nothing if not feeling-based.” Influenced by Expressionism, Impressionism and Pablo Picasso, Eisenman populates her works with emotionally resonant, cartoonish figures, formed out of exaggerated, painterly lines and intense colors. Full of pathos and dark humor, they are expressionistic portraits of herself and her friends, or imagined characters based on her critical observations of contemporary life and culture. Whether carousing at a beer garden or lounging dreamily, in groups or alone, Eisenman’s figures seem isolated and contemplative—products of our time, reflections of ourselves.

ART OUTSIDE OF THE BEDROOM: ROBERT MAPPLETHORPE AND FÉLIX GONZÁLEZ-TORRES