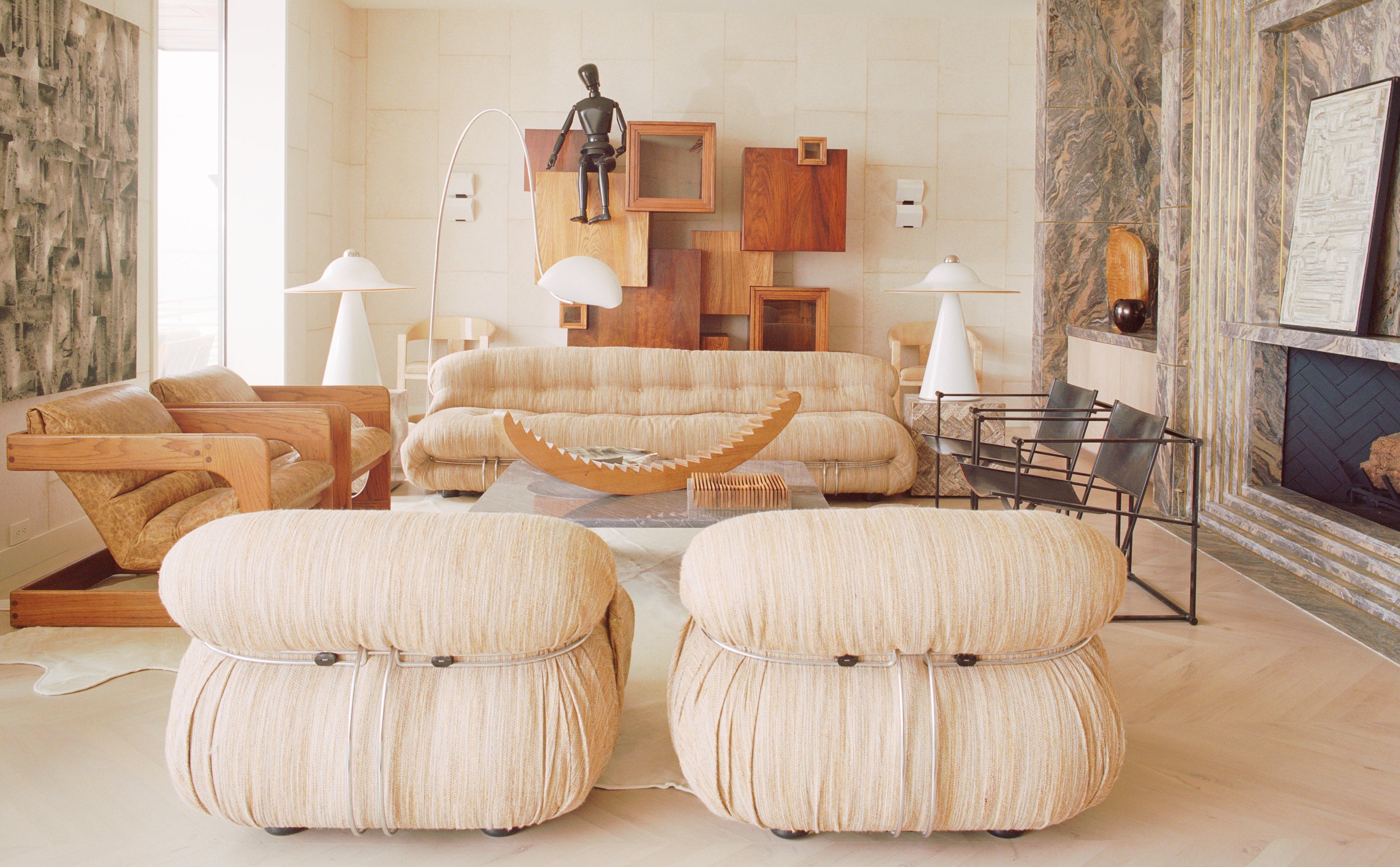 "Midcentury modern" itself is a difficult term to define. It broadly describes architecture, furniture, and graphic design from the middle of the 20th century, which has roots in the Industrial Revolution at the end of the 19th century and also in the post-World War I period. Author Cara Greenberg coined the phrase "midcentury modern" as the title for her 1984 book, Midcentury Modern: Furniture of the 1950s. The book was an immediate hit, and once "midcentury modern" entered the lexicon, the phrase was quickly adopted by both the design world and the auction market.

Most of the designs of the midcentury had gone out of fashion by the late 60s, but in the early- to mid-eighties, interest in the period began to return. By the mid-90s, a niche market of collectors had already driven up prices of the original midcentury designs, snapping up one-of-a-kind pieces that have documented history and provenance. In 2005, Sotheby's auctioned a Carlo Mollino table that sold for $3.9 million, marking a turning point for midcentury modern furniture's auction market.

Some mid-century furniture designs, like the iconic Eames Lounge Chair, never went out of production, but many others had fallen out by the mid 90s. On this month's wish-list, we shine a light on ten exceptionally rare mid-century modern design pieces which have stood the test of time.

Born in Portugal to a family of furniture makers and carpenters, Joaquim Tenreiro moved to Brazil in 1928 where he became a pioneering figure in the development of Brazilian modernist design. His “Mesa Redonda” Table reflects Tenreiro’s virtuosity with wood. Executed in the 1960s in jacaranda, a species of Brazilian rosewood, the table is sensuously curved with no hard corners. The results are long, uninterrupted lines and smooth surfaces that establish a feeling of lightness, a quality which Tenreiro believed “has nothing to do with weight itself, but with graciousness, and the functionality of spaces.” The table's white reverse-painted glass top complements the rich wood grain. Within the same decade of making this piece, Tenreiro shifted his focus to fine arts and by 1967 closed his furniture studio. The “Mesa Redonda” Table is therefore a superlative example from the height of the designer’s career, exemplifying the finest traits of the Brazilian modernist movement.

Charlotte Perriand was a rare female voice among the avant-garde designers whose designs shaped modern living in the early 20th century. As a student, she rejected the popular Beaux-Arts style and found inspiration instead in machine-age technology. She joined the studio of Le Corbusier at 24, where she experimented with steel, aluminum, and glass, developing a series of tubular steel chairs that remain a modern icon. In 1940, she traveled to Japan to advise the government on how to export products to the West, and spent WWII exiled in Vietnam, where she discovered local woodwork and weaving techniques and embraced natural materials. “The most important thing to realise is that what drives the modern movement is a spirit of enquiry; it’s a process of analysis and not a style,” she said near the end of her life. “We worked with ideals.”

The Polish born Jorge Zalszupin moved to Brazil after World War II, where he found an opportunity to develop his extremely sensual, modern architecture. A desire to rebuild a new post-war world and a wave of development in Brazil proved an ideal time for this creative atmosphere to flourish. Graceful lines, strong use of local woods and a combination of impeccable woodworking and classical detailing mark Zalszupin’s furniture. He became part of a select team of talented furniture designers, who worked closely with Oscar Niemeyer on the conception and production of furniture for the new federal capital. The pieces he designed during this time utilized the luxury of leather and combined it with classical Brazilian rosewood.

Zalszupin’s furniture designs are characterised by both geometric lines and organic shapes combined with well-defined proportions, graceful lines and classical detailing. The quality of his furniture has transcended time and his pieces have become timeless. Zalszupin's production established a dialogue very close to the artisanal traditions of working with wood, ensuring quality in the aesthetics and manufacturing of his work.

Italian engineer Gino Sarfatti started the Arteluce Company in 1939 and would go on to design over 700 lighting products—floor lamps, chandeliers, spotlights, and other light fittings—between the mid-1930s and early 1970s. His work at Arteluce effectively shaped the modern architectural movement in Italy and supported many of the mid-century designers including Franco Albini, Gianfranco Frattini, Sergio Asti, and Ico Parisi. Through his exploration and experimentation with new materials like Plexiglas, diverse production methodologies and techniques as well as light sources, such as halogen bulbs, Sarfatti was a true innovator of Italian lighting and design.

Mushrooms, oysters, tongues, and tulips are some of the iconic shapes French designer Pierre Paulin was best known for creating. Having trained under Parisian designer Marcel Gascion, Paulin was influenced by the Scandinavian aesthetic as well as American pre-fabricated designs by Charles and Ray Eames and Florence Knoll. Inspired to develop his own brand of accessible luxury, Paulin began designing and manufacturing seats made of molded wood lined with foam padding and fashioned with a stretch elastic jersey fabric for Thonet-France. Paulin’s forward-looking, innovative designs for chairs, divans, and sofas in an array of bright and vivid colours, can be found in contemporary art and design collections around the world, from the Museum of Modern Art, New York to the Victoria and Albert Museum, London and the National Centre for Art and Culture Georges Pompidou in Paris.

Angelo Mangiarotti was born in Milan in 1921. He studied at the Architectural school and at the Polytechnical school of Milan. In 1953, he went to the United States, more precisely in Chicago where he taught at the Illinois Institute of Technology. He met Ludwig Mies van der Rohe, Frank Llyod Wright, Walter Gropius and Konrad Wachsmann. When he came back from the United Sates, he founded an architectural firm with Bruno Morassutti. In 1989, he founded the Mangiarotti & Associates company in Tokyo. From 1986 to 1992, he held the post of artistic director for Colle Cristalleria. Plastic research was really important to Mangiarotti. Thanks to his personality, his work and his creations, Mangiarotti is an iconic Italian designer.

Born in Vienna in 1913, the son of the famous art historian Max Eisler, one of the founding members of the Austrian Werkbund, Martin Eisler studied in Vienna under the noted architects Oskar Strnad and Clemens Holzmeister. In 1938 he moved to Buenos Aires, where he immediately set about holding his first exhibition of designs and furniture at the Mueller Gallery, which became the National Office of Fine Arts in 1940, in the Palais de Glace. In 1945 he founded the business Interieur with Arnold Hackel, which sold furniture and objects designed by the duo, launching his career as a designer. His work also took him to Brazil, where in 1955 he went into partnership with Carlo Hauner from the company Moveis Artesanais, and became Art Director of the company Forma in São Paulo. Eisler’s experience in Brazil aroused his interest in exotic woods and varnishing and lacquering techniques on wood, glass and bronze. Eisler’s two businesses subsequently began to work synergistically, producing furniture that was highly successful both in Argentina and in Brazil, which culminated in him signing a contract with Knoll International between the late ’50s and early ’60s. This led to his growth and establishment at a time when the contract furniture market was at the height of its expansion, with the founding of the new capital city Brasilia and the Oscar Niemeyer projects, to which he contributed with great success.

Shifting seamlessly between architecture and design, Milan-based Mario Bellini’s oeuvre spans both small objects and major buildings, united by their relationship to human scale. From the 1960s through the ’80s, Bellini developed a series of colored plastic typewriters and calculators that prompted numerous imitators. Their streamlined designs were at once minimal, sensible, and warm. Since the 1990s, Bellini has focused more on architectural projects, such as the redesign of the Department of Islamic Art in the Louvre’s courtyard. Designed to resemble a veil, the undulating canopy of diaphanous triangular panels echoes the geometry of the collection housed below, while also referring to human garb. “I have always mixed an anthropomorphic side into my objects. That could explain why I’m always searching for a human expression, an easily understandable structure of meanings,” he has said.

Oscar Niemeyer was an architect considered to be one of the key figures in the development of modern architecture. Niemeyer was best known for his design of civic buildings for Brasília, a planned city that became Brazil's capital in 1960, as well as his collaboration with other architects on the headquarters of the United Nations in New York. His exploration of the aesthetic possibilities of reinforced concrete was highly influential in the late 20th and early 21st centuries. Both lauded and criticized for being a "sculptor of monuments", Niemeyer was hailed as a great artist and one of the greatest architects of his generation by his supporters. In 1956, Niemeyer was invited by Brazil's new president, Juscelino Kubitschek, to design the civic buildings for Brazil's new capital, which was to be built in the centre of the country, far from any existing cities. His designs for the National Congress of Brazil, the Cathedral of Brasília, the Palácio da Alvorada, the Palácio do Planalto, and the Supreme Federal Court, all designed by 1960, were experimental and linked by common design elements. This work led to his appointment as inaugural head of architecture at the University of Brasília, as well as honorary membership of the American Institute of Architects. was awarded the prestigious Pritzker Architecture Prize in 1988. Niemeyer continued working at the end of the 20th and early 21st century, notably designing the Niterói Contemporary Art Museum (1996) and the Oscar Niemeyer Museum (2002). Over a career of 78 years he designed approximately 600 projects.

Chic, distinctive, and cool, the work of husband-and-wife-team Tobia and Afra Scarpa has found a new generation of sophisticated admirers in the 21st century. Their designs exhibit a decidedly modernist aesthetic, prioritising pared-back elegance and comfort. At the same time, the Scarpas are admired for the ease with which their designs complement both classical and cutting-edge interiors.

Born in Venice in 1935, Tobia Scarpa is the son of famed architect-designer Carlo Scarpa. Alongside his wife Afra, he began working with Venini glassworks in Murano in the 1950s. In 1960, the couple established their design office in Montebelluna. Together, they embraced a variety of materials and expanding technologies across a wide range of designs, from glass, furniture, and lighting to interiors and architecture. In 1969, both Tobia and Afra Scarpa graduated from the Venice Institute of Architecture, with the former winning a Compasso d’Oro prize the following year for the Soriana Armchair for Cassina. Other notable projects include the iconic 1960 Bastiano collection for Gavina, consisting of a sofa, lounge chair, and tables—later reissued by Knoll; the 1966 Coronado Armchair series for B&B Italia, a collection of polyurethane-padded furniture created using the then-new, cold-molded foaming process; and the 1973 Papillion Lamp for Flos, one of the first lighting designs to use halogen technology.